Usher wasn't exactly crashing the party, but was in search of a late-night bite Saturday when he turned up at Mr. Chow and found the Beverly Hills restaurant closed to regulars. 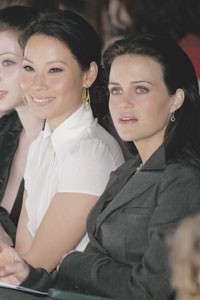 CHOW DOWN: Usher wasn’t exactly crashing the party, but was in search of a late-night bite Saturday when he turned up at Mr. Chow and found the Beverly Hills restaurant closed to regulars — yet teeming with “a really glam crowd,” noted the singer, who was waved in despite no invitation and promptly seated next to Devon Aoki. Her brother, DJ Steve Aoki, manned the turntables much of the evening. And hosts Davis and Dean Factor — the brothers behind Smashbox Studios where Mercedes-Benz Fashion Week is taking place — and Fred Segal Beauty founders Michael Baruch and Paul DeArmas hopped tables to talk to guests Vincent Gallo, Shannyn Sossamon, Robert Downey Jr., Jeremy Scott, Rachel Zoe Rosenzweig, Rose McGowan, Brent Bolthouse, Brooke Davenport and Josie Maran. With so many actors in the room, including a fresher-looking Val Kilmer, it almost seemed natural to hear Karolina Kurkova mention her visit to Los Angeles had to do with “taking appointments” as she made a passing hint about acting.

Meanwhile, designers such as Carlos Rosario, Louis Verdad and Petro Zillia’s Nony Tochterman milled among the stars. But China Chow, an avid supporter of the city’s designers, opted to instead wear something from her father’s archives, a graphic black-and-white T-shirt sweater that Michael Chow got from Karl Lagerfeld more than two decades ago. “Can you believe this once fit my dad?” she marveled.

SWEATS AND THE SINGLE GIRL: Paris Hilton has never been one to forgo an opportunity to strut the runway — or flaunt a Lilliputian pet creature. She did both Saturday night at the New York Street set at Paramount Studios, skipping and dancing for casualwear brand 2 Be Free dressed in colorful, graffiti-scrawled sweat suits and carrying her new pet ferret named Cinderella (leaving her Chihuahua Tinkerbell at home and raising questions as to how the two pint-sized pets get along). That owning ferrets is against the law in California doesn’t seem to faze Hilton — she recently bought three of the fuzzy rodents in Las Vegas. “It’s fun sort of street clothes,” said front-row member Lady Victoria Hervey, a first timer at Los Angeles Fashion Week who said she also planned to attend Sunday night shows for Louis Verdad and Single.

This story first appeared in the October 18, 2005 issue of WWD. Subscribe Today.

SEEING STARS: The front rows at some of this past weekend’s fashion shows may not have been brimming with buyers or editors, but celebrities didn’t shy away from supporting even designers they had no personal connection with. Louis Verdad‘s Sunday night show at Smashbox Studios packed them in, literally, four to a park bench (in theme with the “spring in the park” concept) with Lucy Liu, Rachel Leigh Cook, Michelle Trachtenberg, Elizabeth Banks, Marsha Thomason, Gina Gershon, Anthony Kiedis, Paris Hilton, Kimberly Stewart and an unrecognizably svelte Jack Osbourne, among others. “I can’t believe all these people turned out,” marveled Amber Tamblyn at the Verdad show — which got started 45 minutes late, in part due to the madness among photographers and cameramen — and who plans to hit friend Nony Tochterman‘s Petro Zillia show Thursday night, too. Garcelle Beauvais-Nilon did an outfit change between Verdad and the earlier Kevan Hall show in the same tent.

ORTIZ’S RETURN: After several years away from the spotlight, Lanvin’s former women’s wear designer, Cristina Ortiz, is set to return to fashion. WWD has learned that Brioni, the Italian luxury goods company known for its superior tailoring, has tapped the Spanish designer to head up its growing women’s collection. Ortiz, whose appointment is expected to be made today, replaces Fabio Piras, who has helmed the women’s collection since its inception in 2001.

WET BAR: Rain and a malfunctioning microphone didn’t dampen moods for Haylie Duff and other revelers crammed around the outdoor pool at the Mondrian Hotel’s Skybar Sunday night for the Next fashion show. In fact, it had the opposite effect, inspiring Natasha Henstridge — taking a turn on the runway for HotMomsClub — to dive fully clothed into the heated pool. After climbing back on the elevated runway, she squeezed water out of her black hoodie and matching jeans and finished her walk. Henstridge, a former model, didn’t skip a beat, or lose her black stilettos during the lap. Among the seven participating brands was New York lingerie line Donna L’orèn who, off the runway, revealed plans next spring to launch an as-yet-unnamed sportswear line of camisoles, T-shirts and high-end denim trimmed in lace and satin.

CHANNELING CHLOE: It seems as though Rebecca Taylor is a serious fan of Phoebe Philo‘s handiwork at Chloé. When asked for samples for a recent fashion shoot, Taylor’s company inadvertently sent out a Chloé blouse. But someone forgot to snip all the labels.

GARDEN OF EDUN: If you can’t put on a lavish runway show, put on a lavish preview. So goes the new adage in fashion. Creator Ali Hewson and designer Rogan Gregory are putting on quite a production for the spring preview of their line, Edun, cocreated by Hewson’s husband, Bono. You know, the one in that band? The season’s Edun theme will be “Alice in Wonderland” and what wonders Hewson and Gregory promise — Helena Christensen, Naomi Campbell and Natalia Vodianova. They’ll be nibbling on scones and sipping Sofia Minis. Blonde Redhead’s Kazu will take care of the music and Butik’s Leif Sigersen will stage three floors of vignettes reflecting the themes. For those rock-star sycophants hoping to make time with Bono, however, he’s on tour.