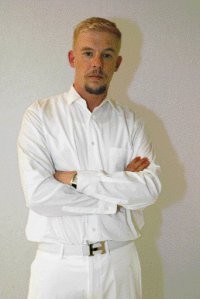 CHRISTIAN ROCK: If fashion were music, what would it sound like? The world will find out in September when Malcolm McLaren releases his next album, “Diorama,” musically detailing the history of the house of Christian Dior. “It’s a wonderful way of making a record,” McLaren said on the sidelines of the Veronique Branquinho show Friday night. “I’m using all that French music that surrounded [Christian Dior], all the way up to the present day with Johnny boy [John Galliano].”

“It sounds elegant, foreboding at times, and childish, too,” McLaren said. Meanwhile, McLaren is also dabbling in journalism. He’s writing an article for Condé Nast Traveler about the fashionable thalassotherapy spa in Quiberon, and it sounds more taxing than music.

“For two weeks I was pushed and shoved and baked and beaten and hosed off,” he said. “I felt great.”

THE SKINNY: Alexander McQueen is not coming out with any diet book, but he’s sure giving Karl Lagerfeld a run for his money in the slim department. Dressed all in baggy whites when he took his bow at his show on Saturday, McQueen looked like a sliver of the moon.

He declined to discuss his vanishing act, but a spokeswoman attributed his ongoing transformation to exercise, healthy living and eating. To wit: McQueen didn’t show up for his post-show cocktail party at Maxim’s. Yet Kate Moss, who made a brief appearance at the club after sitting front row at McQueen’s show, relished participating in fashion as a spectator after so many years on the runway.

ROMAN HOLIDAY: “I don’t know too much about women’s fashions,” film director Roman Polanski confessed as he filed into Helmut Lang’s show Friday afternoon. “But I like his men’s wear.”

Polanski, whose received an Academy Award nomination for “The Pianist,” wore Lang when he received a Caesar award for the film last month. “I like the way he cuts. I’m not so easy to fit,” the diminutive filmmaker said, pausing for a moment, and then clarifying, “You know, my shoulders are wide.”

ROLLING STONE: Organizers of Friday’s Celine show insisted the show did not start late because of the tardy arrival of Sharon Stone. But even if it had, Stone had a decent excuse. En route, her car was pulled over by French police for a random check.

While the chauffeur negotiated a speedy release, Stone signed autographs and posed for pictures. When she finally arrived front-row, she waxed on about the virtues of collections by Michael Kors, which she described as avant-garde but wearable.

“They’re clothes that aren’t the one-time wear,” she said. “They’re not just a glamour shot, and you’re done.”

After the show, she posed for some more glamour shots and was done. There was no sign of Stone at the Celine after-party, dubbed “Boogie Nights” to celebrate its signature handbag. But Kors wasn’t complaining for lack of fun.

“When you’ve got a handbag named after a party, you’ve got to throw one,” he said. “And after all this fashion, I deserve to blow off a little steam.”