CLOTHES CALL: Robert Redford’s appearance at Kenneth Cole’s fashion week opener Friday morning set the paparazzi in overdrive right off the bat. Even Anna Wintour, when informed of his presence backstage, made a... 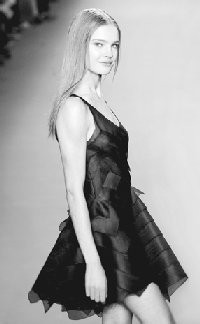 CLOTHES CALL: Robert Redford’s appearance at Kenneth Cole’s fashion week opener Friday morning set the paparazzi in overdrive right off the bat. Even Anna Wintour, when informed of his presence backstage, made a beeline to say hello. But after the show, Redford wasn’t hanging around for a photo op, as his security guards roughly mangled anyone near his route to the back exit, whether or not they recognized the actor.

This story first appeared in the September 13, 2003 issue of WWD. Subscribe Today.

Others in the audience were Edie Falco and Stanley Tucci, Ileana Douglas and Chilli from TLC.

A few seats away, Andrew Cuomo, the designer’s brother-in-law, was doing some family p.r.

“Kenneth really outdid himself this time,” he said. “Some of clothes are amazing.”

But would he really wear some of the sheer tank tops that had passed by?

CALVIN’S COUP: Last season’s top model — Natalia Vodianova — will be conspicuously absent from the New York season with the exception of one big show. That’s because Calvin Klein has landed an exclusive deal with the Russian beauty from DNA to appear only in his show in America, on top of her existing exclusive for his ad campaign.

“Natalia is a natural beauty,” said Kim Vernon, senior vice president of global advertising and communications at Klein. “Our latest campaign inspired us to make a bigger commitment to working with Natalia on a more exclusive basis going forward.”

Vodianova said she’s been working with Klein for over a year, and described the commitment as “serious, but easy to make.”

“It’s a great house with people who always made me feel important and secure,” she said.

Meanwhile, another Calvin Klein exclusive is about to expire. After showing the collection at the brick-walled Milk Studios for several years, and with an exclusive contract to do so there, the company’s management informed the design house that it plans to break the space into two smaller studios. The debut collection of Francisco Costa for the house will also be the last one shown in the space. After that, the company’s next venue has not yet been determined.

EDITOR DU JOUR: Word has it French Vogue editor in chief Carine Roitfeld plans to reprise a Christmas tradition at her magazine by having a celebrity guest editor oversee the December-January issue. Sources said Catherine Deneuve dropped by the Condé Nast France offices this week to go over initial storyboards.

Meanwhile, Roitfeld is getting a new look. Sort of. Coming out in the New Yorker’s fall fashion issue is a Karl Lagerfeld portfolio of Roitfeld shot as the Marchesa Luisa Casati, a Milanese aristocrat born in 1881 whose “experiments with dress” and “powdered skin” (fungal white) became an “alarming mask” that “gave men the illusion that the woman who wore it had willfully ravaged a great beauty.” Doesn’t sound at all like Roitfeld. The idea came about during a brainstorming session last February between Lagerfeld and New Yorker’s fashion editor Michael Roberts.

“I was quite nervous [when Lagerfeld suggested the idea] she wouldn’t go for something quite so retro, but she saw that her parallels with Casati would be used in a modern way,” said Roberts. “So she chose the Rick Owens fur bolero, which is very kind of Postmodern, and twisted it up in such a way that it worked. She was very game.” The issue hits stands Monday and is the New Yorker’s biggest fashion issue to date. It also boasts an extensive profile of John Galliano by Michael Spector and Adam Gopnik on the demise of the department store.

THE SILENT PARTNER?: Will Tara Subkoff elect to thank her dry cleaner on Sunday? The Imitation of Christ designer was spotted at Crown Dry Cleaners on Fairfax Boulevard in Los Angeles recently, yelling at the cashier while picking up an order that a witness described as suspiciously large. “Everyone was looking at her,” the witness said. “The lady behind the counter just kept saying, ‘I’m sorry, I’m sorry.’” [Subkoff] had a lot of stuff with her and I don’t know if it was all for her.”

Subkoff’s ex-colleagues from IOC (and there are so many) have always twittered about her dearth of seamstress skills, and one person close to Subkoff who had heard about the incident wondered if she had asked to get more than a little hemming done. “She usually works with a group of people called her ‘collective’ who do all her sewing for her,” the source said, “but I guess her collective isn’t on the West Coast yet.”

Asked if Subkoff was having samples made there, a Crown employee said the IOC provocateur came to them only for alterations. Of course, the difference between your favorite frayed dress and an IOC piece is a label and $3,000.

Subkoff’s spokeswoman said the clothes in question were all personal. “Tara is extremely small. She takes all her stuff to Crown to get it altered. It’s because she’s itsy-bitsy.”