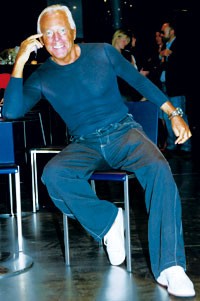 COLOR ME BLUE: Giorgio Armani’s Milan empire just keeps expanding. The designer unveiled his 5,000-square-foot Armani Jeans shop, replete with a cafe, on the hip Corso di Porta Ticinese Monday. “Right now the jean industry is split into two products, mass and trend,” Armani said. “Obviously we’re on the trend end, and it’s important to be visible in a cool, young area. If you get people buying jeans, then there’s the hope that they’ll eventually move up to other collections.” Curved walls covered in blue and red PVC industrial canvas, stainless steel floors and transparent plastic light tubes suspended from the ceiling give a futuristic spin to the two-story space. Armani said that the new retail format will eventually be applied to other jeans stores in what he called “cool cities,” such as London, Amsterdam and Copenhagen.

FRENCH TOUCH: He’ll always have Milan, but Roberto Cavalli is on the move in a big way in Paris. In January, the Italian designer will start renovating a seven-floor building he acquired on Rue Saint Honoré, corner of Rue Cambon. Cavalli plans to add an apartment on the last floor and a Cavalli cafe, similar to the existing one in Milan, because he wants to “show the Cavalli lifestyle” to the Parisians. Could a couture collection be in the works? “Perhaps — why not?” was his mysterious reply.

MORE MOORE: After besting those Olsens and Jessica Simpson for New York fashion week’s celebrity attendance award, Mandy Moore has moved on to become Milan’s fashion gal of the moment. Only days after helping Ralph Lauren fete his new flagship on Via Montenapoleone, Moore sat in the front row at the Emporio Armani show on Monday — and is expected today at the Giorgio Armani show. “This is my first time in Milan. It’s beautiful, I love it,” she said. Getting into the swing of the fashion capital, she said she’s been doing some shopping.

FASHION COMPASSION: You already spend all your money on clothes — why not help out a good cause while you’re at it? To mark its 10th anniversary, Marie Claire magazine asked 10 designers to create one-of-a-kind pieces for an online charity auction. The pieces include a silk Giorgio Armani dress valued at $11,600, which will be sold to benefit the Special Olympics; a Donna Karan lamé gown worth $6,900, which will benefit the Breast Cancer Research Foundation, and a $4,300 python tote bag by Coach, which will donate proceeds to the Peace Games. These and other items will be on view at Givinghearts.net from Oct. 5 to Nov. 20, and they’ll also be featured in the November issue of Marie Claire.