CUT IT SHORT, REBECCA: Two nights ago, Rebecca Romijn-Stamos went to bed an actress and on Monday woke up a model. "I got a phone call this morning asking me whether I would accompany [Giorgio] Armani on the runway today. I was just supposed to be a... 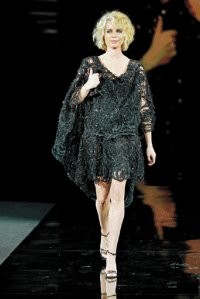 CUT IT SHORT, REBECCA: Two nights ago, Rebecca Romijn-Stamos went to bed an actress and on Monday woke up a model. “I got a phone call this morning asking me whether I would accompany [Giorgio] Armani on the runway today. I was just supposed to be a guest at the shows, but it was like ‘Welcome to Milano’ — here I am on the runway. Glad I could be of service. I’d done some modeling before, but never for Armani,” she said with a laugh backstage after the show. The dresses she wore during the show’s finale — black on the runway and red on the video backdrop that had been taped earlier — were originally floor-length, until Armani got a glimpse of Romijn-Stamos’ legs. “So he chopped the dresses. Just like that. And then he put the fabric around my shoulders like a shawl.” Romijn-Stamos, who will star in the upcoming “X-Men 2”, is headed for Paris after Milan. “Who knows, maybe I’ll get an invitation from (French president Jacques) Chirac.”

Also attending his first Armani show, Kevin Kline was slated to meet the designer today, since Armani is costuming him for his next film, “De-Lovely”, in which he plays Cole Porter. “Unfortunately, I didn’t see anything in the show I would wear,” Kline deadpanned. “I tend towards the conservative. I think Cole Porter was a little flashier than I am.”

Meanwhile, Emilia Fox was easily coaxed to Italy for the day from England, where she starts shooting “Henry VIII” on Monday, and stars as Jane Seymour. She came only to see the Armani show and confessed she’d stay longer if she could. “I’d be quite happy to live the rest of my life here,” said the actress, who just finished making the Italian film “Prendimi l’anima.” But I don’t speak a word of Italian — and I’d have to live off nothing but coffee.”

PRADA PLAY?: Rumors are surfacing once again that Prada is coming under increasing pressure to sell some assets and reduce its debt. The company has already confirmed plans to sell off some $216 million worth of real estate in Italy — and one or two fashion labels might be next to go. Sources say Helmut Lang could be first on the block — and there’s apparently at least one suitor waiting for Helmut’s hand: cash-rich Diesel, which only last year added Martin Margiela to its growing stable. Although Prada’s debt has been shrinking, it was still $832 million at the end of 2002. A Prada spokesman, however, rejected talk of a sale. “Selling Helmut Lang is not on the agenda. We’re opening up a store at the end of the month on Via Spiga.”

SANDER CHATTER: Jil Sander is still missing in action, and has yet to announce her plans, now that the non-compete clause with Prada Group, which owns her trademark, has expired. But companies seeking design help are taking notice of her availability. Sources in Milan said Sander was recently contacted by Richemont SA. Could the group be seeking help for its Dunhill brand, which makes ready-to-wear? Richemont declined to comment.

FULL CLEVELAND: Another major model is in Milan’s midst. Eighties cover girl Pat Cleveland was at Fendi Monday morning to witness the runway debut of her daughter, Anna Van Ravenstein. The 13-year-old’s modeling career is taking off quickly, with agents already lined up in Milan, Paris and New York. But her first exit had some tense moments. “My backpack slipped!” Van Ravenstein said backstage, relieved to be back in her street clothes. Her proud mother, who stood up to watch her every step, was in her glory plunging into the backstage fracas. “Here we go, into the crush,” she said. “It’s so tribal, isn’t it?”

WATER WORLD: Fashion and water do not mix. The Fendi runway, with a narrow trough of water on each side, proved a hazard during show rehearsals on Sunday. Amanda Harlech, an experienced horseback rider who knows a thing or two about water hazards, confessed that she failed to miss that one. But she set a trend. Models Natalia Vodianova and Mariacarla Boscono also got wet. And the audience fared not better — among those tiptoeing into the puddle was The New York Times reporter Guy Trebay, who splashed in the direction of Anna Wintour.