DEJA VU?: On the eve of the first Jil Sander show without Jil Sander — the second time around — Milan is buzzing about the prospect of yet another comeback for the Hamburg-born designer. “She... 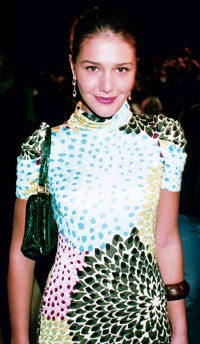 DEJA VU?: On the eve of the first Jil Sander show without Jil Sander — the second time around — Milan is buzzing about the prospect of yet another comeback for the Hamburg-born designer. “She doesn’t want to stop,” said one source on the sidelines of the shows. What’s more, Sander does not appear to be constrained by a noncompete clause.  Word has it that she can work in fashion, just not use her name. Sander is said to be exploring several alternatives, including linking up with investors or a rival luxury group to buy back her fashion house — or launching a new venture under a new brand name. Sander is said to be vacationing and could not be reached for comment. A Prada spokesman  said the company hasn’t received any Sander-linked offers.

WATCH OUT: Bedat & Co. may be one of the lower-profile brands in Gucci Group, but don’t assume president and chief executive Christian Bedat isn’t on the move. WWD has learned that Bedat has been tapped to give design input for Gucci and Boucheron timepieces, as well. “He’s a very talented person, and with such great enthusiasm,” said Gucci Group chief executive officer Robert Polet, confirming Bedat’s new role.

SHOW DIPLOMACY: There’s nothing so unfashionable — and expensive — as a leisurely fashion week. So says Vogue editor in chief Anna Wintour, who along with her Italian counterpart Franca Sozzani, told organizers in Milan on Wednesday they must condense key collections, ideally into four days. “Milan Fashion Week is too spread out,” said Wintour, who plans to skip town on Friday, even though shows end Saturday night. She added she’s “cautiously optimistic” their suggestions will be implemented. “Our answer depends on the date of Hollywood’s Academy Awards,” said Mario Boselli, head of the Italian chamber of fashion. “We are not ruling out the possibility of moving Milan’s Fashion Week to after the Oscars, but we need to know when the awards will be scheduled. In any case, we are talking about 2007, as the Milan dates have already been set until then.”

PRIVATE LIVES: Rebecca Moses, who has designed everything from cashmere sweaters to flatware, has a major project cooking with Saks Fifth Avenue, according to sources in Milan. The American designer and Saks declined comment Wednesday, but Moses is said to be in advanced talks regarding a broad new retail concept, including clothing, that will debut in stores as soon as this fall. Most recently, Moses designed for the now defunct Florentine stationer Pineider. Before that, she had an eponymous fashion line.

DOWNTOWN GIRL: Good luck keeping up with fast-moving Margherita Missoni. She’s shuttling between Milan, where she’s taking exams to finish up her philosophy degree, and New York, where she’s taking acting classes eight hours a day, three days a week. On top of that, she’s serving as the Italian president of charity Orphanage Africa and moving into a new pad. “I’m moving into my apartment Saturday when I get back,” she said at the Missoni show Wednesday. “It’s between SoHo and the West Village.”

LIKE FATHER: Is there a gene for fashion chief executive officer? If so, it looks like Rickie De Sole inherited it. The daughter of former Gucci Group ceo Domenico De Sole has been attending the shows this week including Prada, Burberry and Gucci — where she watched the show from a densely packed aisle. The Georgetown University student, who’s currently enrolled in an exchange program at Milan’s Bocconi University, said she loved the colors and coats at Gucci. When asked if she sees fashion in her future, she quipped: “Definitely. I want to do what my dad did.”

YOU’VE GOT MALE: A handsome, six-foot-three hunk in the front rows has created more buzz during the Milan collections than what’s on the runway.  But James Cracknell is a star — from the world of sport. The Olympic champion rower, who won two gold medals for the U.K., is on special assignment for London’s Telegraph Magazine. “I’m writing about what I would like to see women wear,” Cracknell explained. “What normal guys think looks sexy.” For the novice fashion editor, that means Missoni, but not the voluminous proportions at Marni. Cracknell may have some newfound fashion insight, especially when it comes to quality and putting together a look, but he’s certainly still thinking like a man. “I have to bring something home to my wife, probably La Perla,” he said.

HIT AND MISS: It wouldn’t be a Versace show with only one celebrity. Word has it Elizabeth Hurley will face the paparazzi frenzy tonight with rap diva Missy Elliott, who will no doubt help rock the house at Donatella Versace’s after-party at Dar El Yacout, a hot new Moroccan-themed restaurant and lounge.