DRIVING DOLCE: Giacomo Santucci, former Gucci brand chief, is said to be headed to Dolce & Gabbana in a high-level... 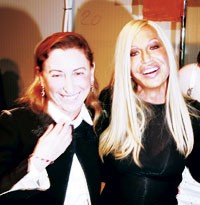 DRIVING DOLCE: Giacomo Santucci, former Gucci brand chief, is said to be headed to Dolce & Gabbana in a high-level executive position, most likely as ceo. Santucci declined to comment and Dolce & Gabbana executives couldn’t be reached for comment Thursday. Santucci has been keeping a low profile since his employment at Gucci was terminated in October in a swirl of management changes under new Gucci Group ceo Robert Polet and controlling shareholder PPR. Santucci had been at Gucci since 2001, joining after an eight-year career at Prada. It’s still not clear whether Santucci will report to director of general affairs Cristiana Ruella or vice-versa.

STAR WARS: Donatella Versace bagged the most unexpected front-row guest this week at her show Thursday night: none other than Miuccia Prada. “I never go to shows,” confessed a smiling Prada, dressed primly in a white shirt and black jacket with frog closure — worlds apart from the strong and sexy looks parading moments later. “Donatella wrote me such a nice note, I had to come. It’s nice to not be working for a change.” In fact, the two designing women are said to be good friends and talk often about work and family life. Backstage, Versace confessed that knowing Prada was sitting in the front row made her nervous — as if it were her first show. “I’m going to ask [Miuccia] to critique my collection,” she said. There were only accolades, however, when Prada congratulated Versace backstage. Her only caveat? “Next time you have to get Donatella to come [to my show],” Prada told Versace’s brother, Santo. Meanwhile, Dean and Dan Caten, the boys behind DSquared, filled out the designer quotient, while a low-key Mohammed Al Fayed, owner of Harrods, popped up at the first Versace show. “It’s so exciting,” enthused Dean Caten, adding: “But we’re not going to take notes.” Pandemonium erupted on the opposite side of the runway once Elizabeth Hurley arrived with her fiancé, Arun Nayar, and settled in to the row with Missy Elliott. The rap diva, who has a new album coming out in May, said she liked what she saw: “I want it all, but I must lose weight to get into it,” she said. “I’ll be on the treadmill.”

MAGGIE RISER: Elegant Maggie Cheung added some much-needed star power earlier in the day, sweeping into the Fendi show with a bright smile and a hairy, sherbet-colored bolero. She confessed she’s a tad conflicted about fur, but can’t resist buying it once she sees it in the shops — which are her next destination. “Tomorrow, I’m going shopping. What else would I do in Milan?” she said with a laugh. Asked about her next film project, the star of “Clean” and “Hero” said she’s reading a few scripts, but hasn’t made up her mind. She has decided, however, to continue indulging her fashion hobby, saying she plans to attend the Balenciaga show next week in Paris.

OSCAR WATCH: He may not be Oscar red-carpet material, but that didn’t affect the daylong love fest for Roland Mouret Wednesday. Selma Blair and Kate Bosworth stayed well beyond the end of the trunk show at the Tracey Ross shop that afternoon, and Blair was back at his side at Ross’ late-night dinner for the London designer at Soho House. “His clothes have the strongest connection to what I love to wear,” gushed Blair. “I love him!” So, too, does Sienna Miller, who snuck away from her party downstairs to show off the super-tight-at-the-rear white pants Mouret made for her. Table guests Amy Sacco, Karolina Kurkova and Natalia Vodianova slipped out before the second course because Sacco was hosting Vodianova’s 23rd birthday over at the Hollywood Standard Hotel. Stylist Phillip Bloch couldn’t believe his eyes at all of the poking at the cake. “What — these models can’t even enjoy themselves at a birthday?” he sniffed.

Mouret was back at Soho House the next day for lunch with Dita Von Teese on the terrace, while in the upstairs private dining room MAC and Jimmy Choo’s Tamara Mellon held their own luncheons. So, too, was Duran Duran’s Nick Rhodes, who Kidada Jones and publicist Lara Shriftman begged for tickets to his band’s Saturday night show at the Staple’s Center.

A first look at the new Lisa Michelle Boyd for Kwiat collection: This $50,000, 16-carat diamond and 18-karat yellow gold peacock feather cuff bracelet shown here, along with matching earrings, are the first two items off the production line; the other eight debut in the coming months. Boyd, who styles Charlize Theron, has been sketching her own jewelry for six years. “It was just a matter of finding a quality company to produce my designs,” she said. “But it took work to convince a traditional, 100-year-old diamond house to take a risk with some modern pieces.” Theron isn’t obligated, and only 10 celebs have been preapproved by Boyd to consider them.

Kwiat and Revlon hosted a cocktail party at the Four Seasons Wednesday eve, where Allison Janney, Teri Polo, Julian McMahon, Daisy Fuentes and “The O.C.” starlet Shannon Lucio sipped Diamond-tinis and vied for an ice pendant in a raffle….In another wing of the hotel was the W magazine Girls Night Out, a beauty and accessory fest where Kelly Rutherford, Susan Becker, Paula Abdul and Michelle Trachtenberg turned up for eyebrow waxing and psychic readings. Jeweler Penny Preville even brought out a tiara, knowing Abdul’s fondness for them.

Later, Foxx joined hip-hop king Kanye West during his performance, which Pepperdine sophomore Vanessa Traina and her skateboarder-clothing designer beau, Chad Muska, couldn’t get enough of. Traina’s missing the Oscars because she’ll be at Paris Fashion Week, hitting, she rattled off, “Balenciaga, Chloé, Dries and Dior.”