EYE CATCHERS: Pop princess Christina Aguilera sure knows how to cause a ruckus. And that’s exactly what she did at Versace Monday night as she strut the runway to her seat, setting off one of the biggest paparazzi crushes of the... 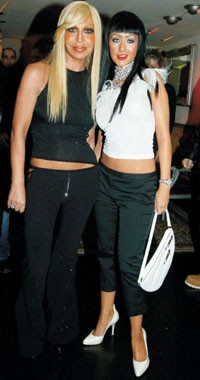 EYE CATCHERS: Pop princess Christina Aguilera sure knows how to cause a ruckus. And that’s exactly what she did at Versace Monday night as she strut the runway to her seat, setting off one of the biggest paparazzi crushes of the couture week so far. “I’m going to see as many shows as possible, naturally starting with Versace,” she purred. While the pint-size singer might have had problems reaching her front-row perch, singer and producer Pharrell Williams had difficulties staying in his. Williams was positively rapt whenever his girlfriend Karolina Kurkova appeared on the runway. Later that evening, Aguilera and Donatella Versace kicked up their heels at the V.I.P. nightclub on the Champs-Elysées. “There was really a good vibe backstage and I hope it showed,” Versace said. Meanwhile, Williams, still unable to remain seated, busted a move with Kurkova on the dance floor as the party throbbed into the wee hours.

NIGHT LITE: Loulou de la Falaise, showing her latest signature collection at her boutique here Tuesday night, welcomed her old master, retired couturier Yves Saint Laurent. He wished her well, drank a nonalcoholic beer and mused on the future of his brand. Asked what he thought about Alexander McQueen — tipped to take on the brand once Tom Ford exits in April — Saint Laurent offered his approval. “He’s someone who is very accomplished, technically, someone who could do a good job,” he said. Asked if he could think of any other candidates, “I have no idea.” Certainly Saint Laurent has plenty on his plate. He’s hard at work on his and Pierre Bergé’s new fashion museum, which will open its inaugural exhibition, titled “Yves Saint Laurent and Art,” during the ready-to-wear shows in March.

NEEDLE IN A HAYSTACK: Liv Tyler has had it with epic searches for gold rings with dangerous powers. “I’m on an Academy Award hunt,” she declared Tuesday night at the Givenchy show. “I’ve never come to couture before.” And what about after she gets this dress business solved? She said she should have word soon on a movie she wants to do with actor Steve Buscemi.

COVER IT, GIRL: After all those years on the runway, model Carolyn Murphy has found out she prefers watching it all from the sidelines. Covering couture week for Elle’s April issue, Murphy has been writing, sketching and photographing like mad — and reveling in the chaos. “To see Christina Aguilera and all the stars arrive at Versace, it was just nuts!” she said. “I videotaped the whole thing.” Meanwhile, actress Lou Douillon is also playing journalist this week, for French fashion magazine L’Officiel.

CHANEL’S BELLES: “We’re in the garden, you know,” Karl Lagerfeld said Tuesday morning after his Chanel couture show. Who knew? The house constructed a spectacularly chic tent — nestled up to the entrance of the historic Hotel de Bourbon-Conde, from which the models emerged. The time slot didn’t dissuade a constellation of stars from turning out in style. In a week dominated by diminutive singers, Kylie Minogue set the paparazzi wild, ducking backstage for some reprieve. Elsewhere, Kristin Scott Thomas was in high spirits after exorcising her nastier side in her role as the evil countess in the forthcoming film, “Arsene Lupin.” “I loved being absolutely wicked,” she quipped. “That, and the very small corset I wore.” Scott Thomas will soon be heading to South Africa to start shooting Regis Wargnier’s “Man to Man.”

SCENE STEALER: Christian Dior’s Avenue Montaigne boutique is hogging the limelight. Tonight, French filmmaker Claude Lelouch, who already filmed a scene at the Dior show, will thicken the fashion plot. Star Maiwenn Le Besco — director Luc Besson’s ex-wife — plays a woman struggling to make it as a singer. She gets caught shoplifting Dior at a department store, but once she hits the big time, she returns to buy them legit. Take two comes on Thursday, when Sarah Jessica Parker and her “Sex and the City” crew commandeer the shop to wrap up its Paris shooting.

RED ALERT: What’s 80 feet long and a magnet for celebrities? Valentino’s runway, of course, and his couture show Wednesday should not disappoint. Among those expected are Marisa Berenson, Firyal of Jordan, Liv Tyler, Sylvia de Waldner, Chantal Miller and her daughters Pia, Alexandra and Marie-Chantal. There’s also a chance of Gwyneth Paltrow, a great friend of the house.