FASHION’S FACE?: Talk circulating Thursday indicated that one of the most ardent cosmetics supporters of fashion week might be on the road to becoming its official sponsor. MAC Cosmetics, which supports dozens of runway efforts in multiple... 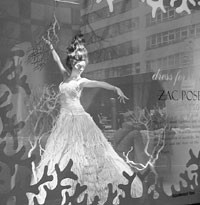 FASHION’S FACE?: Talk circulating Thursday indicated that one of the most ardent cosmetics supporters of fashion week might be on the road to becoming its official sponsor. MAC Cosmetics, which supports dozens of runway efforts in multiple cities, is said to be close to signing a deal to succeed Shu Uemura as the sole cosmetics sponsor of the shows. MAC is owned by the Estée Lauder Cos., while Shu Uemura’s majority owner is L’Oréal. Another L’Oréal firm, Redken, is said to be continuing as the tents’ hair sponsor. It also is rumored that MAC will do body painting in the tents this season. No executives were available for comment at press time.

UNDER THE SEA: When Bloomingdale’s put its creative talent on the case of designing a window display for Zac Posen’s spring collection, Harry Medina, window director, went directly to the source. Medina and Posen collaborated on the store’s Lexington Avenue windows, which open today and run through fashion week, to interpret the designer’s spring collection, called Sargasso, which was inspired by the sea and shells.

The mannequins’ hair was spread out and their faces sprinkled with glitter as if they were mermaids underwater, while Posen and Medina rigged up special lighting that shines through shallow pools of water to reflect waves across the display, filled with coral shells and other ocean accouterments. While the spotlight is on Posen for the moment, his fluid dresses provided the store with a sneak peak of its big spring campaign, called Dress for Spring, in which designers including Francisco Costa for Calvin Klein, Marc Jacobs, Ralph Lauren, Donna Karan, Esteban Cortazar and Diane von Furstenberg have created exclusive dresses for Bloomingdale’s. The campaign kicks off on Feb. 2, and will be showcased in the store’s Third Avenue windows with a range of exclusive dresses by its contemporary vendors like Necessary Objects.

FIRST IN SHOW: Julie Chaiken, founder and chief executive officer of Chaiken, won’t be running around backstage at her company’s show on Feb. 10 in Bryant Park. She and her husband, Scott Grigsby, are busy caring for their first child, Ethan Oliver Grigsby, who weighed in at 7 pounds, 8 ounces on Jan. 21 in San Francisco. “Other than some sleepless nights and walking around in a haze,” Chaiken’s new life isn’t all that different from pre-fashion week prep work. “You work some long hours and then it’s all worth it.”

R.E.D. ALERT: Valentino is continuing its new strategy of expanding its appeal to edgier tastes. For its fall presentation of the Valentino R.E.D. collection, the company recruited downtown graffiti artists IRAK —?a collaborative known for shoplifting designer goods and then reselling them on the Lower East Side, as in “I steal clothes off of RAcKs” — to customize its invitations. Each of the red rubber invites for the Feb. 4 presentation at Lot 61 was “tagged” by artists from the group, with labels like IRAK and “Red!” At least if they steal from Valentino, they’ll be doing so red-handed.

FIT FOR MCQUEEN: Alexander McQueen wasn’t there, but that didn’t dissuade hip-hop star Eve, Anjelica Huston, Joely Richardson and the late Helmut Newton from turning out at the Chateau Marmont last week to view the designer’s lauded spring collection play out salon style.

This was McQueen’s first-ever promotional event on the West Coast, and it was staged just days before the red carpet fashion sweepstakes got under way. Nicole Kidman, in fact, hit the American Film Institute luncheon the following day in a second-skin patchwork suit from the collection.

For the two afternoon shows, the cozy, dark public living room of the Chateau was transformed with snow white carpeting and chairs to the effect of a Gothic chapel.

“I thought I was just coming to see some clothes in a suite,” said Leelee Sobieski following the second show, which also drew Kelly Lynch, Lisa Eisner, Dennis and Victoria Hopper and Emily Mortimer. “But this kind of blew me away.”

In the penthouse suite and on the patio looking out on the city, several racks held the complete collection. Another room was set aside for pearl and gem pieces by Autore South Sea Pearls, which was a sponsor of the event.

“I want to be alone with these clothes,” purred Eve, wrapping a dress still hanging on the rack around herself. “I have to get out of here or I’m going to buy everything.”