FERRE’S NEW MAN: The buzz in Milan is that Massimo Macchi is headed to Gianfranco Ferré to become its new chief executive officer, a post currently held by Tonino Perna, president and chief... 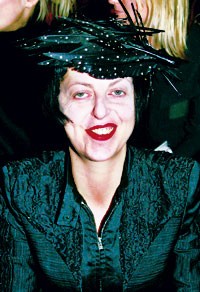 Macchi declined comment, as did an IT Holding spokeswoman. Macchi is currently group director of marketing and sales at footwear company A. Testoni and was previously president and ceo of Gucci-owned Boucheron. Perna took over the ceo position after Enrico Mambelli exited Ferré last summer.

SWANK DOES SUNSET: In case any one in Hollywood isn’t hip to Hilary Swank’s golden girl status right now, all they need do is take a cruise down Sunset Boulevard. There, along the stretch famous for its one-off billboards, are not one — but three — oversized ads-in-the-sky featuring the Oscar-nominated actress: One for “Million Dollar Baby,” another for Calvin Klein, and the third for the Vanity Fair Hollywood Issue, of which she’s the only one from the magazine’s class of 2005 shown. “Have you ever seen three of anyone?” marveled her manager, Jason Weinberg. Actually, never.

BLAST OFF: Pay attention when you receive your John Galliano show invitation, because it won’t be at the usual location come Paris Fashion Week. An explosion and fire Sunday morning gutted the Théâtre de l’Empire, where Galliano has shown for the past four years. Police are investigating the cause of the blast. No one was seriously injured. Meanwhile, a Galliano spokeswoman said Monday that the show will go on, and the hunt for a new venue is under way.

BLOW’S KISSES: She’s best known for her hawkeye in spotting emerging fashion talent, but now Isabella Blow is about to strut some stuff of her own. The fashion director of Tatler, Philip Treacy muse and fashion stylist will be coming out with her very own MAC lipstick in September. “I wanted to call it ‘Blow J-b,’ but it’s an American company, and they wouldn’t let me do it,” she said before the Julien Macdonald show Sunday. “So I’m calling it ‘Blow.’ ” The shade will be a deep magenta. “The color of the bougainvillaea in San Francisco and St. Barth’s — but a shade darker,” she added.

MATTHEW’S MOMENT: Moët & Chandon’s party in London in honor of Matthew Williamson, scheduled for Wednesday night, could be bigger and better than anyone is anticipating. The dress code on the invitation is Hollywood Glamour, and the London-based designer seems to be taking that VERY seriously. Sienna Miller will take part in Williamson’s retrospective runway extravaganza, and Gwyneth Paltrow is expected to deliver a recorded message in honor of the designer. The show, to be held at East London’s Old Billingsgate Market, will be opened by Jade Jagger and wrapped up by a performance from singer — and Williamson muse — Kelis.

SPRINGING SPADES: Now that she’s got a baby on the way, Kate Spade has decided to dedicate her storytelling to bedtime. For the last few seasons, Spade’s ad campaigns have featured quirky narratives about families visiting Tennessee or a woman leaving her mate and packing off to Switzerland. But for spring, the designer chose to take a more surreal and whimsical route. In the series of three ads, ballet dancers dressed in colorful tutus and ruffled tops bounce around on the beach. Stylist Lori Goldstein sourced clothing everywhere from the Royal Ballet to a young collective called Boing — and of course, Kate Spade. Thierry van Biesen, whose work has appeared in Italian Vogue, shot the photos.

FASHION LOVE: Who needs clothes when you can have kisses? Tracey Emin has designed a special installation for London Fashion Week, made from pink neon, that forms the phrase “Kiss Me, Kiss Me, Cover my body in love.” It’s on display in the reception area of the tents at Battersea Park, the official show venue. “The space is quite intimate, so the neon looks really vibrant,” said Emin, adding that the piece has a special meaning for her. “It tells you what fashion means to me,” said the artist, an ultrasexy dresser who counts Vivienne Westwood among her favorite designers.

LONE STAR REPUBLIC: London Fashion Week isn’t exactly front-row celebrity central, so when a well-known name actually materializes in row one, it’s something of a moment. So how did Juliette Lewis feel as the lone guest of honor at Julien Macdonald’s show — and the only celebrity to grace the week so far? “Hmmm, I’m feeling how it feels,” said Lewis, looking at the anonymous faces around her. Lewis, in the U.K. on tour with her band Juliette & The Licks, wore a purple Macdonald dress with feathers to the BAFTA awards on Saturday night, and was decked in one of his skinny gray tailored suits at the show. But when it comes to dressing for the stage, she prefers leather duds of her own design. “I wear leather jumpsuits,” she said. “Basically, I envision superhero costumes and have them made.”

REED ALL ABOUT IT: Paula Reed, style director of the newly launched weekly fashion glossy Grazia, published by Emap under license from Mondadori, wants to underwhelm her readers. “What we’re giving them is a weekly fix. We don’t want the pages overloaded with merchandise and information. Everybody needs an editor,” said Reed, who filled the shopping pages of the launch issue with just a handful of trends including yellow, geometric prints, military and the belted mac. And if things don’t work out, there’s always next week. “The good thing about a weekly is that if you’re not happy with some of the coverage, then it doesn’t hang around to haunt you,” she added with a laugh. In November, Reed, who helped launch In Style and Condé Nast Traveller in the U.K., will come out with her first book, “How To Dress.” Published by Judith Reagan, it’s a handbook to discovering your personal style.