Fashion Scoops: First Lady … Haute or Not … Big in Japan …

FIRST LADY: It wasn’t the first fashion show for Gucci chief executive officer Robert Polet, but it was for his wife, Caroline. Together, the fashion novices schmoozed with the style set, chatting it up with Mario... 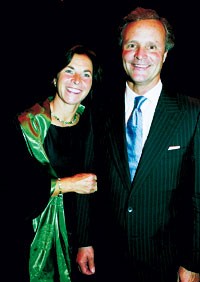 FIRST LADY: It wasn’t the first fashion show for Gucci chief executive officer Robert Polet, but it was for his wife, Caroline. Together, the fashion novices schmoozed with the style set, chatting it up with Mario Testino after the show. Caroline snapped pictures of her husband with her digital camera as he gave television interviews. Still, she seemed a bit flummoxed by the crush of press, declining to say if she had a favorite piece of the collection. “It was very Gucci. It was very, very nice,” she said.

HAUTE OR NOT: Although Domenico Dolce and Stefano Gabbana have started to sell one-of-a-kind pieces that can sell for upward of $100,000 out of their Milan flagship, the designers don’t want to be called couturiers. “Couture just reeks of oldness,” Gabbana proclaimed on the sidelines of a press conference Thursday ahead of their Dolce & Gabbana show today. “These dramatic clothes are made just to sell perfume. They’re just not wearable.” Dolce went further, lamenting, “Couture today has become surreal, impossible to wear. What we’re trying to do is understand what the market wants.” The duo has discovered that women will shell out top dollar for one-offs. “They want something quick, yet never before seen,” Gabbana said. On offer behind leopard-and-gold-covered doors in the Milan store are dresses, furs and embroidered jeans starting at $1,200. The designers say they hope to roll out the concept to other flagships.

BIG IN JAPAN: Karl Lagerfeld, as fashion’s ultimate multitasker, wouldn’t dream of taking a trip to Japan for only one purpose. To wit: When he travels to Tokyo in early December for the opening of Chanel’s new Ginza flagship — and to unveil a Coco Tokyo pre-fall collection — he’s packing his cameras, too. That’s because he’s collaborating with Interview magazine for a special Tokyo issue, spotlighting personalities from the worlds of film, fashion and art. Interview’s Ingrid Sischy said her only concern is Lagerfeld’s penchant for shooting in the street. “He’s really popular in Japan,” she said. “I think I’m going to be the traffic cop. I can feel it.”

ACTING UP: “We’re often inspired by film,” Emanuele Della Valle said Wednesday night at his massive, jam-packed Hogan presentation. And how. Among the attractions were a live Lee Strasberg Method class, a raw cut of Al Pacino’s upcoming documentary on the legendary acting coach and, of course, plenty of colorful bags and shoes. “We try to transmit some of the same magic [of movies] with our collections,” Della Valle explained.B>Dennis Hopper, who is developing a film with Della Valle, presided over the acting class with a bevy of hopeful actors, one of whom will win a one-year scholarship at the Actor’s Studio in New York.

HE GETS BY WITH A LITTLE HELP FROM HIS FRIENDS: Riccardo Tisci knows how tough and expensive it can be to stage a runway show, so the Milan designer called upon a little help from his friends, namely Maria Carla Boscono. The Italian model recruited a bunch of her runway cohorts from Gucci just prior to work gratis at Tisci’s presentation. The space, as well as hair and makeup, were offered up as a favor to the aspiring designer. The invitation, featuring a black-and-white photo of Boscono peeking out of a hoop skirt, promised, “handmade dresses worn by friends in a borrowed space.”

OPRAH’S GIFT THAT KEEPS ON GIVING: Oprah Winfrey made headlines this month when she treated every audience member at the filming of her season premiere to a brand new Pontiac G6. In the same episode, marking Winfrey’s 19th year on the air with “The Oprah Winfrey Show,” she also surprised Alex Molina, 20, who had been shuffling between homeless shelters and youth hospitals, with a makeover by Tyra Banks, a full four-year college scholarship to a university of her choice and a $10,000 wardrobe from Express. Not to mention that spanking-new Pontiac.In an episode of Winfrey’s show that aired Thursday, the talk-show host showed footage from her follow-up with Molina: a shopping date at Express at the Beverly Center in Los Angeles. Since Molina will be heading off to school soon (where, exactly, is still undecided, but applications are in), she sought professional items such as tailored jackets, handbags and sweaters. By day’s end, Molina had spent $1,835. After the shopping spree, Winfrey and her best friend, Gayle King, treated Molina to lunch, then whisked her off to meet Jay Leno, where Oprah was due to appear on “The Tonight Show.”

ALEX GAINES SUPPORT: Hoping to play off the cultish success of her family-owned denim line, Paper Denim & Cloth, Alex Gaines called on friends and family Wednesday night to launch her eponymous clothing line at Scoop. And Shoshanna Gruss, Lauren DuPont, Fernanda Niven, Beth Blake, Christina Cuomo and Charlotte Ronson came and rifled through Gaines’ sexy daywear that takes a corporate look to an edgier, funkier level. “It’s a good way to start the fall,” said Scoop owner Stefani Greenfield, who had to place more orders of the line just before the party because it was flying off the shelves. Also there to cheer Gaines on was her dad, Dick Gilbert, chief executive officer of Mudd Jeans. “I am more nervous today than I was on her wedding day, because this is her future,” he said. And a success it was, when the party spilled out onto the street, the cops arrived to ID those with martinis in hand and send them back inside.