FUEL FOR THE FIRE: With Gucci Group said to be open to licensing, and perhaps shedding underperforming brands, the presence of Diesel chief Renzo Rosso at Alexander McQueen’s show Friday night set many tongues wagging. But... 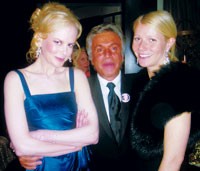 FUEL FOR THE FIRE: With Gucci Group said to be open to licensing, and perhaps shedding underperforming brands, the presence of Diesel chief Renzo Rosso at Alexander McQueen’s show Friday night set many tongues wagging. But Rosso, who also took in John Galliano’s show on Saturday, insisted he was just a spectator and admirer of the two designers. “No business,” said Rosso, who also owns Martin Margiela and has a production and distribution agreement with DSquared. Still, he did hint that he had a deal cooking that should be finalized by early next year.

GOLDEN YEARS: Valentino Garavani and Giancarlo Giammetti treated their gal pal, Gwyneth Paltrow, to a special belated birthday party Thursday night in Paris at Giammetti’s riverside apartment. Wearing a Valentino couture gown, a fur shrug and plenty of diamonds, Paltrow curled up on the couch and chatted with friends including Stella McCartney, Mick Jagger and Diane von Furstenberg. But arriving just in time for cake with a giant cherry on top was a surprise guest: Nicole Kidman, setting the stage for the paparazzi frenzy to come at the Chanel show on Friday. It was a regally blonde moment as the two Oscar winners embraced.

By Sunday, filmmaker Baz Luhrmann was ready for a comparatively more serene fashion experience when he attended Rochas. “I rolled out of bed and found a message from my wife that she was at the show,” said Luhrmann. “I decided to join her.” Luhrmann, who filmed Kidman for Chanel’s new No.5 fragrance ad, said he was open to doing other fashion-related projects. “But the real reason I did Chanel was because Nicole was involved,” he said. “We were thinking of producing an album with Nicole singing. She has a very interesting voice. We still may do it.”

Meanwhile, Karl Lagerfeld is getting his own star treatment, since French filmmaker Rodolphe Marconi plans to spend the next five months filming the designer for a feature-length documentary-character study titled “Lagerfeld Confidential.”

“We are following him everywhere,” Marconi said backstage at Chanel, pausing to add, “except the bathroom.”

FIRST STEPS: There was a new face on the Valentino runway on Sunday: Georgina Brandolini’s 17-year-old daughter, Bianca. “I think it’s fun for her. She’s very flattered,” said Brandolini, who worked at Valentino and Balmain before launching her signature brand of evening sweaters. “It’s just one exit. I don’t want her to be a model.” Not that there’s anything wrong with that. “I think she wants to work in fashion, like her mother.”

STAR TURNS: Nicole Kidman wasn’t the only celebrity game in town. Maggie Gyllenhaal, who just wrapped up a trio of films, including “The Great New Wonderful” and “Happy Endings,” arrived at the Louis Vuitton show on Sunday afternoon banking on the restorative powers of fashion and France. “I’m still recovering,” she said, alluding to all those movie projects. And her plans for the sojourn? “For me, it’s just putting on nice clothing and being in Paris,” she said. Mission accomplished.

At the Jean Louis Scherrer show on Sunday afternoon, Gerard Depardieu was still hobbling on a cane months after his 14th motorcycle accident, but he isn’t giving up his speed-demon ways any time soon. “That’s life,” quipped the actor. “But there are some habits you just can’t kick.” Depardieu is currently costarring with Fanny Ardant in a Henry James play in Paris.

And Hong Kong-born actress Maggie Cheung hit the Paris shows big time, taking in Alexander McQueen, Sonia Rykiel and Chloé, to name but a few. On hiatus after playing a junkie in “Clean,” the actress said she’s biding her time before jumping into another film role. But she’s hardly a fashion addict. “I’ve done the shows before, maybe five years ago,” she said. “I think that’s often enough.”

CONTINENTAL AMBITIONS: Speculation about the possibility of Isaac Mizrahi gearing up for a design stint at a European house — perhaps one known for a certain big-sleeved blouse — intensified last week with the news that the designer has engaged a French public relations firm to represent him on a full-time basis. But the move has nothing to do with all the Givenchy rumors, which Mizrahi chief executive officer Marisa Gardini flatly denied on Friday. “Really, there’s nothing to it,” said Gardini.

The company hired DM Media in Paris to handle its European publicity house in response to a growing number of inquiries from media outlets in Paris, Gardini said. “We’re keeping a foot in the door in terms of press,” she said, noting that Mizrahi currently doesn’t sell his signature products on the Continent. “We are looking to judge what the interest would be for a possible expansion overseas.”