Word has it Angelina Jolie will be sporting a custom-made St. John gown to the Golden Globes on Monday. 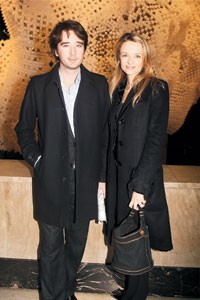 GOING FOR A SAINT: Word has it Angelina Jolie will be sporting a custom-made St. John gown to the Golden Globes on Monday. The house is working on two possibilities: one gray and one black. Jolie is said to have been less than ecstatic with the clothes as of late, although she is contractually bound to wear them at times. To remedy that, the St. John team has been working overtime to make her happy, and drove up from its Irvine, Calif., headquarters for Jolie’s fitting Thursday in Beverly Hills. Baby Shiloh was said to be present, but no word on which gown she preferred.

DESIGNING WOMEN: The creative gene seems to be a dominant one in the Fendi family. “I’m making my own jewelry,” said 19-year-old Delfina Delettrez Fendi, in Paris Wednesday night.

Delettrez Fendi said she was taking tips from her father, fine jewelry designer Bernard Delettrez. “I only just started designing a month ago for friends,” added Delettrez Fendi before her mother, Silvia Venturini Fendi, set the record straight. “And mothers,” she quipped, showing off one of her daughter’s designs, an elegant beaded necklace.

Delettrez Fendi was taking time off from her studies at the Accademia D’Arte Drammatica Lilvio D’Amico in Rome to attend an opening at the Palais de Tokyo of Italian artist Loris Cecchini sponsored by Fendi, where fashion’s most fabulous, art aficionados and members of the French and Italian silver screen convened for a pre-couture week soiree. “It’s amazing,” said Delphine Arnault as she weaved through the labyrinth-like installation by Cecchini with her brother, Antoine. Karl Lagerfeld, meanwhile, had his head in the clouds as he admired Cecchini’s “Cloudless” sculpture made up of small white plastic balls that loomed overhead. French actresses Melanie Laurent and Inés Sastre also admired the artwork.

PARIS MATCH: Leave it to Giorgio Armani to ramp up the star wattage during couture week in Paris. According to sources, Tina Turner and Katie Holmes are among the VIPs slated to attend a series of events Jan. 23 and 24, which include a cocktail at Armani’s new Avenue Montaigne flagship, the Armani Privé couture show, a gala dinner and the launch of premium skin care collections with his beauty partner, L’Oréal. Armani will also be setting off celebrity fireworks during the men’s fashion shows in Milan next week, where Clive Owen is expected to be among the front-row guests — having just signed to be the face of Hypnôse for Men from L’Oréal subsidiary Lancôme. Also look out for a runway appearance by Cayetano Rivera Ordoñez, a red-hot Spanish matador, who is said to be joining Armani’s handsome family of brand ambassadors and represent his made-to-measure business.

SUIT YOURSELF: Everyone knows about “Sexy,” but will Justin Timberlake also bring the three-piece suit back? The suit is one of the dapper Yves Saint Laurent looks Timberlake is wearing onstage for the “Futuresex/Loveshow” tour with Pink that kicked off Monday in California. YSL designer Stefano Pilati created the looks exclusively for Timberlake, who wears mostly YSL on stage, according to a YSL spokesman.

DESIGNER DISCOUNT: The irony. Notorious for its vertiginous price tags, Rochas, whose clothing business is in the process of being shuttered by owner Procter & Gamble, is to be the focus of a massive sale in Paris of past couture, ready-to-wear and accessories collections starting Jan. 25. The four-day event, which is to be held at the former Rochas couture atelier on Rue Nollet, will mainly feature pieces from the Olivier Theyskens and Peter O’Brien eras, with prices lopped up to 80 percent off boutique prices. “Certain major U.S. clients have been granted early access,” said Véronique Masson, who along with her twin sister, Valerie, organized the sale. The pair is scouting a partner to hold a second sale in New York. Certain sought-after pieces, however, such as the gray bird-on-a-wire column worn by Kirsten Dunst at the Cannes Film Festival last year, are being offered to museums, said Stéphane Lemonnier, finance and administration manager.

DANCING WITH THE STARS: Ken C. Hicks has accomplished a lot in life: president and chief merchandising officer for J.C. Penney Inc., West Point grad, Harvard M.B.A., Army captain and — as of Wednesday night — YMA Fashion Scholarship Fund 2007 honoree. But the highlight, judging from the expression on his face at the YMA black-tie benefit, was dancing with Paula Abdul. Abdul, Hicks and Liz Claiborne Inc. group president Karen Murray — all 2007 YMA honorees — kicked off dance floor festivities together. Abdul also danced with the 100-plus student scholarship recipients there, perhaps making amends for showing up more than an hour-and-a-half late, holding up the awards presentation. “I got here late,” Abdul told the record 1,250 people in attendance. “Why? Because I couldn’t pick out my dress.” Ironically, Abdul had an Alvin Valley dressed picked out for her, which was even promoted with the event, that she apparently decided not to wear.