Fashion Scoops: He Wants to be a Part of It … Jewelry Box … Cultural Exchange …

HE WANTS TO BE A PART OF IT: England swings, but so does New York. Which is why Alexander McQueen plans to spend a great deal of time here in the next three months. McQueen will arrive in town on Wednesday to look for a short-term... 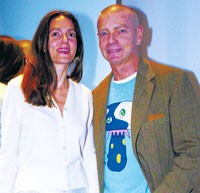 HE WANTS TO BE A PART OF IT: England swings, but so does New York. Which is why Alexander McQueen plans to spend a great deal of time here in the next three months. McQueen will arrive in town on Wednesday to look for a short-term rental. He’ll then focus on developing his U.S. business and will also collaborate on a creative project with his friend Steven Klein. If that sounds a tad cryptic, well, those artistic types like to retain a sense of mystery.

JEWELRY BOX: Marie-Helene de Taillac cut the ribbon on her first jewelry boutique Sunday night in Paris at the end of fashion week. “We only finished the boutique’s final touches Saturday,” she said. But by Monday, business was already booming. “We have already had a great deal of customers from all over Europe,” she said. “So far, so good.”

CULTURAL EXCHANGE: Last Friday, while Bernard Arnault was on his way to Japan for the opening of a Louis Vuitton-sponsored art exhibit, Vuitton honcho Yves Carcelle hosted a rare performance of Kabuki theatre in Paris. While it didn’t have quite the frenzy of a fashion show attended by Nicole Kidman, Japanese fans pushed their way to take snapshots of their national heroes. Carcelle noted that Vuitton sponsors numerous cultural events in Asia. “And we bring them a lot of goods, too!” he quipped. Meanwhile, behind his sunglasses, guest Gilles Dufour was checking out the fashion scene. “It’s funny to see ladies in kimono and others in Chanel,” he said.

COLD FRONT: Although perched in the front row at many Paris shows, burlesque queen Dita Von Teese, aka Marilyn Manson’s fiancée, had her upcoming wedding on her mind. It might be at a friend’s castle in Ireland in February or March. “I think I might wear Vivienne Westwood for the ceremony and Roland Mouret for the party,” she said at Nina Ricci on Saturday. Certainly she’s ruled out all the spring collections she’s been taking in. “We prefer winter dressing: stockings, dark colors,” she explained. “Summertime for us is planning our outfits for the winter.”

WINDOW DRESSING: Julie Gilhart of Barneys New York popped into the Lanvin boutique late last week, and — lo and behold — designer Alber Elbaz was on the sales floor helping a gaggle of women, including some out-of-town editors, with their selections. “I was shocked,” Gilhart said. “It’s amazing. What other designer, right before their show, is in their store? And then he does the windows and merchandises, too.”

SEE JANE DRESS: Fashion is playing a recurrent role on Jane Pauley’s new talk show. The NBC personality has recruited Cynthia Rowley and Kay Unger to appear on an upcoming segment entitled “Flattering Your Flaws.” The designers used nonmodels to show off their know-how with eveningwear and daywear, and later sent them the clothes.

Last week, Anna Sui joined Pauley to offer her two cents about how your attire reflects your personality. During the show’s inaugural week last month, Isaac Mizrahi used his sketch pad to prep audience members for fall by showing them how to make the most of their wardrobes and dress for their body types.BABY TALK: Phoebe Philo’s husband, London art dealer Max Wigram, may be preparing for fatherhood, but when it comes to baby clothes, he leaves that to the woman of the house. “I never give Phoebe advice,” he said on the sidelines of the Chloé show on Saturday. Still, he thinks a Chloé collection for infants certainly has potential. “Children are just as important as grownups, I think she will do a great job with kids.”

A TASTE OF PARADIS: Alysson Paradis, Vanessa Paradis’ little sister, took in her first Chanel show Friday, but she and designer Karl Lagerfeld go way back. “Karl asked me to pose for some photographs. I was very flattered,” she said. The budding actress just finished filming her debut movie “Le Dernier Jour,“ or “The Last Day.” Meanwhile, down the row, actress Anna Mouglalis was musing about the fringe benefits of her chosen career. “The great thing about the job is we get to learn how to speak so many languages,” said Mouglalis, who has been doing films in Greece and Italy, not to mention an English-language stage play.

MOULIN BLUE: Designer Maurice Ohayon has been on cloud nine since Friday, when Nicole Kidman chose to wear a pair of his black Notify jeans to the Chanel show in front of hundreds of cameras. “Women are always looking for jeans that lengthen the silhouette,” he said in his showroom last week. Almost on cue, in strode model Nadja Auermann, who’s not exactly challenged in the height department.

BIG SPENDERS?: Louis Vuitton celebrated the opening of its new Rodeo Drive flagship in Los Angeles with a dinner on the rooftop deck of the new 16,000-square-foot store, while projecting its signature monogram onto the Gucci store across the street. In attendance were Serena Williams, Kristin Davis, Dylan and Shiva Rose McDermott and Lilly Tartikoff, who feasted on a Nobu dinner while Vuitton’s North American president Jean-Marc Gallot toasted Nicky Hilton’s 21st birthday with vintage Dom Perignon. Williams sported a rose gold watch, while McDermott carried a Scottish-inspired bag. But the loans were only temporary. “We don’t give discounts to celebrities,” said Gallot. “They have to pay full price.” In the end, they settled for the monogrammed chopstick holders in the goodie bag, while Williams’ beau Brett Ratner quipped, “I let Serena buy all her own Vuitton, but I buy her Gucci and Armani because they offer discounts.”