The world's largest Louis Vuitton store, which opened to the public last Wednesday on the Champs-Elysees in Paris, was greeted with Japanese television crews and long but fast-moving queues of Asian and American tourists eager to shop. 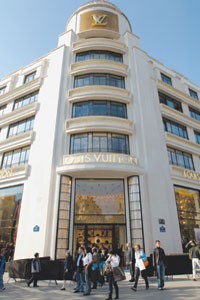 HEY BIG SPENDERS: They came and they spent — big time. The world’s largest Louis Vuitton store, which opened to the public last Wednesday on the Champs-Elysées in Paris, was greeted with Japanese television crews and long but fast-moving queues of Asian and American tourists eager to shop. On Friday, a spokeswoman for Vuitton reported a “huge success” with jewelry and watches and a “strong start” for sunglasses, a new product category exclusive to that location for one month. Also, all 125 miniature versions of iconic Vuitton handbags, priced from 600 to 750 euros, $725 to $900 at current exchange, blew out. Bigger ticket items also appeared to move swiftly. On Friday, a shopper was told there were only four pairs left of limited-edition crocodile pumps — which retail for 3,000 euros ($3,625). And over in the jewelry department, one major jewelry case stood empty: A spectacular necklace of white and yellow diamonds, the most expensive item in the store at 330,000 euros ($399,000), already found a buyer.

SUB TENNANT: When John Galliano opened his Christian Dior show during Paris Fashion Week with a radiant Stella Tennant, was he giving us a wink about his forthcoming ad campaign? You bet. According to a Paris source, Tennant is in the studio shooting with photographer Nick Knight. Tennant succeeds Kate Moss, who had appeared in ads for Dior fashions and accessories for one year.

HAPPY ANNIVERSARY IVERSON: It’s hard to believe controversial basketball star Allen Iverson has done anything corporate for a decade, but the Philadelphia 76ers guard is celebrating his 10th anniversary as a Reebok-sponsored athlete. Tonight, Iverson and Reebok will mark the milestone with a party at the Canal Room in TriBeCa and will introduce the new Reebok Iverson basketball shoe, Answer IX, as well as an accompanying advertising campaign. Former heavyweight champ Mike Tyson is among those expected to attend. Hold onto your ears.

OFF THE RACK: Designers often look to the female figure for inspiration — though perhaps not as literally as the five-year-old British handbag company Bracher Emden, whose signature handbag design is dubbed, the “Breast Bag.” Co-designer David Bracher said, “The outside of a bag looks like a brassiere and the inside looks like a pair of titties.” Asked if he found inspiration in breasts, Bracher said, “The bag just happened to turn out like that.” With October being Breast Cancer Awareness month, the company put the bag to good use. Along with Henri Bendel, the company called on famous clients, including Cindy Crawford, Kelly Ripa, Mandy Moore and Eva Longoria, and asked each to customize a Breast Bag to be auctioned on eBay at eBay.com/henribendel from Tuesday through Oct. 28. All proceeds go to the Young Survival Coalition. The bags will be displayed in Bendel’s windows starting this week as part of the store’s “Think Pink” coalition to raise money for breast cancer charities.

SCRATCH AND SNIFF: Valentino fans seeking sensory overload should head to the designer’s Milan boutique this week for an installation called “Senses Behind Fashion.” Conceived by designers Patricia Urquiola and Martino Berghinz, the exhibition will play off the sensory importance of seeing, hearing, touching and smelling the world of Valentino. It runs Wednesday through Sunday. Visitors can expect optical illusions, a whiff of new fragrance V, a soundtrack and a chance to touch silk foulards. The store will host a cocktail party Tuesday night to kick off the festivities. There, tasting will prove the most critical sense of them all: Piedmont chocolates and Barolo wine will be making the rounds.