HOT KNOTT: Louis Féraud has a hot line for fall — as in stolen. Thieves broke into Féraud’s Paris headquarters Thursday and made off with 25 pieces of the collection shown on the runway two days earlier. Curiously, the thieves... 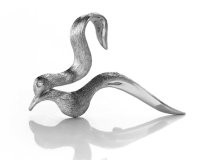 HOT KNOTT: Louis Féraud has a hot line for fall — as in stolen. Thieves broke into Féraud’s Paris headquarters Thursday and made off with 25 pieces of the collection shown on the runway two days earlier. Curiously, the thieves didn’t grab from one rack, but selected key looks, including smokings, leather jackets and a dress with an iconic print. Féraud managing director François-Xavier de Monts said the theft is wreaking havoc on its sales campaign, but the house is sewing up duplicates right away. Maybe the thieves are, too. “We hope, at least, it will copied,” De Monts said. “We’re trying to see things in a positive way.”

FASHIONABLE LONDON: It seems Giorgio Armani is ready to take on London — once again. The designer plans to unveil his retrospective at London’s Royal Academy on Oct. 14. The show, which was set to take place last fall, will now run until mid-February 2004. The traveling exhibition, which began in 2000 at the Guggenheim in New York, will run at Berlin’s Neue National Gallery from May until July. Bob Wilson, who designed the original set for the retrospective, will be adapting his designs to suit the Royal Academy’s space. Armani plans to host an opening gala the evening of Oct. 14.

Meanwhile, a day later, Nicholas Coleridge, chairman of the British Fashion Council, will present a major music and fashion event at the Royal Albert Hall. Fashion Rocks will match 15 design houses — including Chanel, Versace and Yves Saint Laurent — with the artist or band that best suits them, for a series of runway shows to benefit Prince Charles’ charity, The Prince’s Trust.

PEACE OUT: With the media glare on Hollywood during Oscar week, it’s no surprise that those in the spotlight are using their star wattage to bring attention to the growing antiwar sentiment — and at least some of them will be doing it through jewelry. Global Vision for Peace, a new philanthropic group founded by developer Xorin Balbes and journalist Cliff Rothman, has enlisted jeweler Henry Dunay to create an 18-karat yellow gold and diamond peace pin inspired by Picasso’s Dove of Peace. Among the Oscar nominees slated to wear it are Daniel Day-Lewis, Pedro Almodovar, Meryl Streep and Ann Roth. The pins will then be auctioned on eBay along with signed notes from the wearers, with proceeds going to the demining of Angola and Afghanistan. A less-expensive version is being designed for retail online and on QVC.

Meanwhile, Nancy Davis, whose Race to Erase MS raises money for multiple sclerosis treatment, has also started designing a 100-piece line of jewelry called Peace and Love, which retails for $300 to $2,500 at Saks Fifth Avenue. The theme of the jewelry seems to have resonated with stars like Brooke Shields and Tom Arnold. Her latest sterling silver necklace, co-designed with John Hardy, retails for $100. “It’s a message that speaks to everyone in the world,” she said.

BILL BLASS BACK IN BRIDGE: Bill Bill Blass is back under the same name — but with a different look. Hundreds of invites were mailed last Thursday announcing the launch of an “American Classic Bill Bill Blass” bridge and better dresses collection. “The collection will represent the finest fabrics, quality, maintaining the integrity of the brand Bill Blass,” the invitation read. A spokeswoman confirmed the line will bow at retail this fall, with dresses for day and evening retailing between $200 and $1,000. It is being produced by licensee BBS International Group.

Last year, Bill Blass Ltd. partnered with Urchin to produce a sportswear collection. Prior to that, Blass attempted to crack that market several times with such lines as Blassport, which had limited success.