Is Chanel getting into the furniture business? Not quite. But the French fashion house has commissioned furniture maker Domeau and Peres to produce an armchair designed by Fabrice Hybert that is quilted red leather and inspired by a Swiss Army knife. 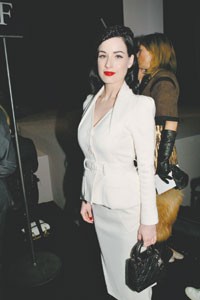 HOT SEAT: Is Chanel getting into the furniture business? Not quite. But the French fashion house has commissioned furniture maker Domeau and Pérès to produce an armchair designed by Fabrice Hybert that is quilted red leather and inspired by a Swiss Army knife. The chair is destined for a pavilion being designed by architect Zaha Hadid for Chanel. It will house an art exhibition that is slated to make its debut in Tokyo later this year before traveling around the world. Celebrities expected at Chanel’s couture show today include Sigourney Weaver, Sofia Coppola, Vanessa Paradis, Kate Bosworth and Rinko Kikuchi.

GOING SOLO: Dita Von Teese is out to prove the show must go on — without Marilyn Manson. The newly single showgirl, who turned up front-row at Elie Saab Monday, disclosed she’ll be performing a “secret” number at an event here this week. “I’ve been through a lot of turmoil lately, so it’s good to get some escapism,” she said. Elsewhere at Saab, Ivana Trump said she’s on the lookout for an outfit for her role as master of ceremonies at the Miss Universe pageant in February.

SALUTING NAN: Yves Saint Laurent is planning his own homage to the late American style plate Nan Kempner. The retired couturier and his partner, Pierre Bergé, are organizing an exhibit in tribute to Kempner at their Avenue Marceau foundation that will feature some of the more than 350 Saint Laurents that Kempner purchased from the house. The show is scheduled to open in May. Meanwhile, the increasingly reclusive Saint Laurent delivered his famous “Love” New Year’s poster on Monday. This year’s features a model in a 1985 YSL look with a tag reading, “Fashion Changes, Style Remains.”

PEEPING TOM: “Fashion is an art, too,” quipped artist Tom Sachs as he slipped into his front-row seat at Dior on Monday. Sachs, who has mined fashion for inspiration in the past (think of his Prada guillotine), was in town to inaugurate his solo show at Paris’ Galerie Thaddaeus Ropac. His next project? “I’m building a full-scale lunar module,” he said. “The last time we were on the moon was during Vietnam. Since we have our own Vietnam on right now — Iraq — I thought another spaceship was in order.” Down the row, Diane Kruger said she saw her first couture show four years ago, “and it was Dior. I’d like to make it a tradition.” Kruger said she was leaving Paris for Los Angeles this week to start working on her new film, “National Treasure: The Book of Secrets.”

ALWAYS ANGRY: The late playwright John Osborne wrote his masterpiece “Look Back in Anger” in just 17 days. But writing the book on Osborne took New York Observer theater critic John Heilpern a lot longer. “Seven years with a year off just for naps,” he said Friday at the party held for his new book, “John Osborne: The Many Lives of the Angry Young Man.” Among those present at the Upper East Side apartment of writer Jean Stein were Heilpern’s Observer editor Peter Kaplan, P.E.N. president Michael Roberts and the actress Natasha Richardson, who is well acquainted with both the biographer and the biographee. “He had a relationship with my father that was combustible, at best,” she said of Osborne and her director father, the late Tony Richardson. “I was one of the few people he was nice to.”

IN THE BAG: Paris fashion designer Andrew Gn, who already has made a considerable footprint with his shoe collection, soon will apply his sensibility to handbags. Word has it that New York accessories firm Leiber (formerly Judith Leiber) has tapped Gn for a range of fall designs for late day and evening, to be labeled Andrew Gn for Leiber. Aiming to attract younger customers and refresh its image, Leiber recently tapped celebrity stylist Rachel Zoe to do a capsule handbag line.

CYNTHIA’S NEW GIG: Lord & Taylor just got a big dose of design talent. The retailer said Monday that it has hired Cynthia Steffe as a consultant, but added that details of Steffe’s new role at the store would be disclosed at a later date. The Cynthia Steffe firm is owned by Bernard Chaus Inc., which produces the Cynthia Steffe labels, but the designer and Chaus parted ways about a month ago, freeing Steffe for L&T. NRDC Equity Partners LLC purchased L&T last fall from Federated Department Stores and is breathing new life into the business.