According to industry sources, Lancome, the L'Oreal-owned beauty brand, has signed Clive Owen to be a spokesman. 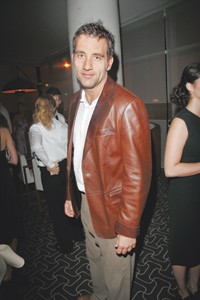 INSIDE MAN: According to industry sources, Lancôme, the L’Oréal-owned beauty brand, has signed Clive Owen to be a spokesman. Owen — the actor featured in such films as “Children of Men” and “Sin City” — is expected to be introduced to the press at a Lancôme event tonight in Paris.

STILL COOL?: Just as some people question whether the celebrity fashion machine is starting to sputter, another famous face is entering the fray: Rap star Coolio will present his first apparel collection here Tuesday. The curly haired Grammy winner and his Italian manufacturing partner, Mamaindustry, will unveil Gang*Star for fall. The collection, featuring men’s, women’s and unisex items, will officially bow at Barcelona’s Bread & Butter later this month, but editors will get an advance peek at the denim-heavy line.

Sketches show women in fitted puffy jackets, fur boots, tight jeans and cropped tops with an urban feel. Key pieces are jersey minidresses, stretch T-shirts and leggings. “The inspiration for the collection is street couture with a strong reference to young people, street kids who frequented the streets of America at the turn of the century,” Paolo Rubin, owner of Mamaindustry, said in a statement.

Mamaindustry, which will manufacture and distribute the Gang*Star line, is a Padua company that produces the Italian streetwear label Mafia Wear. Coolio recently released a new album called “The Return of the Gangsta.”

OPEN TABLE: When it comes to shopping these days, food is becoming just as important as fashion, and retailers like Saks Fifth Avenue are hiring big-name chefs to breathe new life into their in-store restaurants. In 2005, Bergdorf Goodman got in the game with its seventh-floor eatery, BG. Now it seems the retailer is taking its dining service even more seriously. Beginning Jan. 15, Michael Perricone, formerly general manager of Neiman Marcus’ Rotunda restaurant in San Francisco, will take over as director of Bergdorf’s four restaurants. He plans to add seasonal items to the existing menus and build the afternoon tea and cocktail-hour businesses.