Fashion Scoops: Into the Trees … Grayed Out … Miss Jackson …

INTO THE TREES: It was a perfect example of, “If you can’t stand the heat, get out of the kitchen.” At the Marc Jacobs show in September, many of the celebs on-hand wouldn’t speak with reporters or pose for... 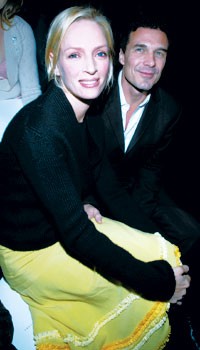 INTO THE TREES: It was a perfect example of, “If you can’t stand the heat, get out of the kitchen.” At the Marc Jacobs show in September, many of the celebs on-hand wouldn’t speak with reporters or pose for photographers. This season, Uma Thurman and her hotelier boyfriend, Andre Balazs, hid from them.

The pair arrived at the Lexington Armory around 9:30 p.m. to take their front-row seats. They uncomfortably posed for paparazzi and answered a few questions. Thurman said she was there because she’s “friends with Marc” and is also starring in his latest ad campaign for Louis Vuitton. She couldn’t say what piece of Jacobs she owns is her favorite, though she was wearing a Vuitton skirt. She likes “the theater” of going to fashion shows, although she hasn’t been to many. And as the rest of the 1,500-strong crowd, which also included Michael Pitt, Beyoncé Knowles and Lil’ Kim, waited for almost an hour for the clothes to finally appear, Balazs and Thurman disappeared. Many in the audience wondered where they went as the large room overheated. Some thought they’d stormed out. Instead, Thurman and Balazs had escaped to behind one of the trees near the bottom of the runway, where they stayed and watched the show from their own private perch, so to speak.

A bit lower maintenance was Jacobs’ muse, Rachel Feinstein, who was with her husband, the painter John Curran. “I’m standing because I can’t sit down in this outfit,” said a visibly pregnant Feinstein. She wore it specifically for Jacobs. “He likes this knocked-up librarian look.”

GRAYED OUT: Barely three months on the job and St John’s new advertising agency in New York, David Lipman, is already shaking up the look of the bridge line’s fall campaign. Word is that founding daughter Kelly Gray is out of the picture, a decision made by she and Lipman, said a person close to the company. Who will replace the tanned blonde in the future ads? “An A-actress,” said the source, who also said Gray was in New York last week meeting with Lipman to cast the campaign. No word yet on if the lucky celebrity will get to cavort with beefcake models in steamy milieus, the motif favored for 22 years by the Irvine, Calif.-based St. John. The company and Lipman declined to comment.

MISS JACKSON: Downright demure in turtleneck sweater, jeans and a camel-colored Bill Blass coat, Janet Jackson feverishly e-mailed on her Blackberry from her front-row seat at Bill Blass. Taking some time to unwind before going to work on a new album, she is a newfound fan of designer Michael Vollbracht.

“Michael and I have started a friendship. I love his work. I think he is a wonderful person and a major designer,” she said. Jackson’s fashion show coverage, however, began and ended at the Blass show: “This will be it.”

Any inquiries about her being glad to see another Super Bowl go by were ruled out-of-bounds. “I don’t talk about the Super Bowl,” she said. With that, her handlers ruled, “Game over.”

And while Jackson’s people shooed press and paparazzi away, Bernadette Peters, accompanied by Joel Grey and Donna Murphy, was the belle of the ball. Fresh from Palm Beach, where she is performing in a nationwide concert tour, Peters looked chic in her Catherine Malandrino jacket, Gucci pencil skirt and Prada brooch. What inspired her to abandon a relative paradise in favor of New York’s blustery fashion week? “They’re the Oscars of the fashion world,” she proclaimed. Next in line for Peters is Zac Posen’s show on Friday, which will feature jewelry by Sean Leane and Fred Leighton.

CHERRY-PICKERS: Cecilia Dean, Debbie Bancroft, Fred Wilson and Glenda Bailey packed into Louis Vuitton’s Fifth Avenue store Monday night to celebrate its first-year anniversary and shop for a cause. Vuitton’s new Monogram Cerise (cherry) collection had less than eight hours on the selling floor before the party began, and in the two hours the event lasted, Vuitton sold 120 cherry items — an average of one per minute. Fifteen percent of the proceeds benefitted the United Cancer Front. “I love the cherry line,” said Vuitton president Yves Carcelle, who was in town for the event and to see Marc Jacobs’ show. “Two years ago, the cherry blossom was on the Murakami [collection]. It took two years for the flower to become the fruit.”

SOFIA’S CHOICE: She’s been the guest editor at a fashion magazine, so why not a fashion label? Sofia Coppola is doing just that for New York-based cashmere label Lutz & Patmos. She designed, and even modeled, her short, belted dress that’s part of the forthcoming fall-winter collection. Past collaborators at Lutz & Patmos have included Christy Turlington, Fabien Baron and Ines Van Lamsweerde.

STATE AFFAIRS: It’s not quite Oscar night, but Swiss fashion label Akris scored some unexpected fashion publicity when Secretary of State Condoleezza Rice wore its cognac-and-black checked suit to meet British Prime Minister Tony Blair and German Chancellor Gerhard Schroeder during a swing through Europe last week. Several German papers took note of her attire, with one complimenting Rice for the “modern, perfect cut” of her “glamorous” suits. Akris designer Albert Kriemler said he’s “thrilled” to have Rice wearing Akris — and happier still that she discovered it on her own and paid retail.

OSCAR COUTURE BUZZ: When Giorgio Armani unveiled his first couture collection, Armani Privé, in Paris, it clearly was no coincidence that it was just in time to be considered for the Academy Awards on Feb. 27. The 32-piece collection, including the original runway accessories and clever fakes of the Privé Fine Jewelry collection, was flown to the Beverly Hills showroom for a special presentation last Tuesday through Thursday, during which 15 top stylists, several key publicists and one very major Oscar nominee stopped by to get a first look. It clearly worked, since Charlize Theron donned an Armani Privé gown at the SAG Awards last weekend. Now the collection is being shown in New York through Friday, after which a portion of the handmade beaded and boned confections will return to Los Angeles, in hopes of being chosen for the big day. Incidentally, Armani celebrity maven Wanda McDaniel’s husband, Al Ruddy, produced the Oscar contender “Million Dollar Baby,” so it remains to be seen if the cast chooses to wear Armani as a good-luck charm.

SOPHIE’S SECRET: “I know what the title is, but I’m keeping it a secret,” said Sophie Dahl of her next book while waiting for her friend Matthew Williamson’s show to start. What the model-cum-writer would relate is that unlike her previous book, “The Man With the Dancing Eyes” it won’t be meant for children. “It’s my grown-up debut,” laughed Dahl, the granddaughter of the late children’s author Roald Dahl. “There aren’t any pictures in this one.” In fact, the amazonian (and still resplendently thin) beauty will be spending the entire month of April at a writer’s retreat in upstate New York in order to finish up. And she’s not wasting too much precious time on shows. Aside from Williamson’s, Dahl will only attend Zac Posen’s Thursday night extravaganza.

RODMAN REFORMS: The flamboyant basketball star Dennis Rodman — known in years past to sport serious fur coats — has changed his stripes. He signed on this year’s celebrity spokesman for the People for the Ethical Treatment of Animals’ “I’d Rather Go Naked Than Wear Fur” campaign.

“I’m against people that’s killing animals for their own pleasure,” Rodman said in an appearance at Bryant Park Monday. Rodman is the first man to pose nude for the campaign — which has previously featured Pamela Anderson and Kim Basinger — and in a nod to his heavily tattooed physique, Rodman’s ads bear the tag line “Think Ink, No Mink.”

While Rodman signed on to the campaign — and readily acceded to photographers’ pleas that he remove his shirt — he offered a somewhat low-key approach to activism.

“To each his own. We live in a society that’s kind of f—– up, but hey, what can we do about it? I think if people actually saw the video, I think they’d change their minds,” he said, in reference to PETA’s gory documentaries of fur farms.

IN A CLOUD: Actress Katie Holmes seems to be looking to shed her good-girl image. The former “Dawson’s Creek” star stepped out with “Pieces of April” last year, where she played an East Village rebel, and now she is set to star in a movie called “Thank You For Smoking” with Aaron Eckhart and Robert Duvall that follows the travails of a chief spokesman for a big tobacco company, the actress said Monday night at the BCBG show. Holmes politely chatted with reporters amid a minor media frenzy. “I am a huge fan of BCBG,” said the actress, who sported a metallic dress and white coat from the brand. “One of the first dresses I bought was from BCBG, and I love their style. It’s youthful, and you feel feminine.”

SWITCHING SIDES: Reports are that makeup artist Diane Kendal, who helped design the ill-fated Calvin Klein color cosmetics collection, is cutting ties with MAC and heading to Giorgio Armani Cosmetics. While representatives for the brand would not comment on Kendal’s possible appointment, the company has been searching for a replacement for Pat McGrath, who was named global cosmetics creative design director of Procter & Gamble late last year and consulted on the creation of the Giorgio Armani cosmetics line.

BLUE MAN GROUP: They’re not Bobbies and it wasn’t the changing of the guard at Buckingham Palace. Actually, it was slightly unnerving to see about a dozen Emergency Medical Services officers wearing flak jackets and helmets and carrying machine guns descend upon Olympus Fashion Week at Bryant Park on Tuesday. A 7th on Sixth employee said it was just a routine security sweep. For the Hercules team, which is dispatched to high-profile events throughout the city, it was a routine assignment, not an opportunity to see models in skimpy clothes. “They’ve been there, done that,” said a spokeswoman for the Midtown South precinct of the New York Police Department. “It gets to be old hat after a while.” Fashion seekers in the lobby barely noticed the battalion in blue, although photographers snapped the strange sight of the flatfoots amid a sea of stilettos.

FOXY DESIGNER: Surrounded by her entourage at the tents on Monday, Vivica A. Fox waxed enthusiastic about fashion and revealed that she has designs on the business herself. Fox, who starred in the Fox Network’s series “Getting Personal” and appeared in films such as “Kill Bill Vol. I,” and “Kill Bill Vol. II,” “Ella Enchanted” and “Soul Food,” took in the Luxe and Romance, Baby Phat and Betsey Johnson shows. “J.Lo’s doing a great job, but I wouldn’t mind joining her,” Fox said. “All the rappers and athletes are making money with fashion. I’d like to start my own line. I’d like to bring some glamour to fashion. After all, actresses set the trends.” Asked if she’s had any discussions with fashion companies, Fox demurred, but added coyly, “Maybe this time next year you’ll be watching my runway show.”