There are no hard feelings chez Christian Dior. "I'm having lunch with my ex," Dior chief executive officer Sidney Toledano quipped on Wednesday before sliding into a corner banquette at Le Stresa in Paris. 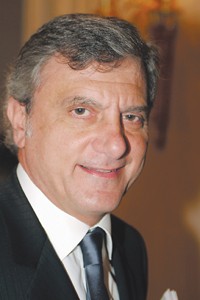 J’ADORE DIOR: There are no hard feelings chez Christian Dior. “I’m having lunch with my ex,” Dior chief executive officer Sidney Toledano quipped on Wednesday before sliding into a corner banquette at Le Stresa in Paris with none other than Marla Sabo, who last month exited Dior as its U.S. president and chief operating officer. Sabo — dressed head to toe in Dior, the latest version of the “Flight” bag dangling from her arm — embraced other Dior executives at the popular restaurant before leaving. But she was mum about her future plans, saying she was in Paris just for the day.

MILLA FOR MANGO: She may have her own fashion line, but that hasn’t stopped Milla Jovovich from lending her face to fast-fashion retailer Mango. The Spanish chain has tapped the model and actress to front its fall campaign. Jovovich follows in the footsteps of former Mango models Claudia Schiffer and Elizabeth Jagger. That needn’t worry Jovovich, though, since she’s had plenty of experience with advertising campaigns — she’s a spokesmodel for L’Oréal and was formerly a face of Emporio Armani and Donna Karan.

MATERIAL MATTERS: The Madonna Gallerie, a temporary collection of art, licensed apparel and all things Madonna, will open at W Los Angeles Westwood Hotel May 17, four days prior to the start of the pop diva’s Confessions Tour. Signatures Network, a licensing company with the merchandising rights for The Beatles, John Lennon and U2, among others, created a limited-edition line of T-shirts for the store, which will sell along with photographs of Madge by Herb Ritts, Steven Klein and Jean-Baptiste Mondino. The store will remain open for the duration of Madonna’s concerts at the Los Angeles Forum, until May 25. W Hotels plans to open more Madonna Galleries in conjunction with shows in other major markets. A portion of the proceeds of the Madonna Gallerie will be designated by Madonna to UNICEF.

KORS DELIGHT: Michael Kors headed to Greenwich last week with his fall collection and was amazed at what he saw — women of all ages waiting at Richards of Greenwich for him and his fashion show. The presentation preceded a three-day trunk show that generated more than $700,000 in orders, according to Jack Mitchell, chief executive officer of the family-run Richards and its sister stores, Mitchells of Westport and Marshs of Huntington. “This collection is an homage to Ali MacGraw, so what better place to celebrate that than in Greenwich,” Kors said. “Today I have seen women here from ages 10 to 60, which is just amazing.”

This story first appeared in the May 11, 2006 issue of WWD. Subscribe Today.