LAUNCH MODE: P. Diddy never makes a secret of his admiration for Ralph Lauren and his desire to build another version of Polo. And as he gears up for the holiday launch of Sean by Sean Combs, his new... 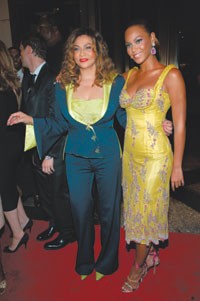 LAUNCH MODE: P. Diddy never makes a secret of his admiration for Ralph Lauren and his desire to build another version of Polo. And as he gears up for the holiday launch of Sean by Sean Combs, his new women’s line, he’s taking another lesson from the master’s book. Sources close to Sean Combs said he has selected actress Penelope Cruz to appear in his fall advertising campaign, which will be shot by Peter Lindbergh. Cruz, of course, was for several seasons the face of Ralph Lauren fragrances and fashion.

BIDDING FRENZY: “I’ve never been to anything like this before,” said Patricia Field as she surveyed the anxious crowd at the Museum of Television and Radio to support Beyonce and Tina Knowles in an auction and exhibition of dresses and costumes from Beyonce’s video, television and film appearances to benefit the VH1 Save the Music Foundation. Former Destiny’s Child members Kelly Rowland and Michelle Williams arrived before the woman of the hour, and so did Carmelo Anthony of the Denver Nuggets, Michael Olowokandi of the Minnesota Timberwolves, America’s Next Top Model Eva Pigford, Jay Z and P. Diddy, who made a quick appearance before taking off. Tina and Beyonce, dressed in a gown designed by her mother, arrived at 9 p.m., and 30 minutes later, the online bidding was getting fierce: An exclusive lunch with the Knowleses had a top bid of $5,900.

Field walked away with an 18k gold and diamond Lorraine Schwartz “Evil Eye” necklace after placing the top bid of $2,200. After posing for paparazzi and fans’ camera phones, Beyonce and friends were whisked to an upstairs lounge. “No one’s guarding her Grammys,” shouted Matthew Knowles, Beyonce’s father, to a security guard, as he juggled two Grammy awards in his hands and made his way through the crowd to the elevator.

“It’s fascinating to see those dresses and to know that I’ll never experience that moment again,” Beyonce said. “When we talked about doing this, I asked, ‘Will it be only me and my dresses?’ Because it’s really strange to see people looking at dresses you’ve worn,” she said. “As a musician, this is a great cause, and I’ve had a lot of friends who’ve had music really save their lives. But it’s sad to let the dresses go.” The event raised $42,886.95, and 10 items are still open for bidding until Thursday.

This story first appeared in the June 27, 2005 issue of WWD. Subscribe Today.

KARL REFLECTS: Who better than Karl Lagerfeld — maybe the closest thing the modern era has to a Sun King — to write about one of Versailles’ most spectacular features, the Hall of Mirrors? That’s what the Chanel creative director did for the new issue of Time Europe, describing the painstaking restoration of the gallery, whose mirrors are surrounded by 1,100 square meters of marble, 20 chandeliers and ceiling paintings by Charles Le Brun. According to Lagerfeld, “At Versailles, Louis XIV tried to give the idea of infinity a physical shape — strolling through the fabulous Hall of Mirrors is like walking inside a beam of light.” The issue, a special on the natural and man-made wonders of Europe, goes on sale today; the refurbishment won’t be completed until spring 2007.

REVIEWING RAF: Raf Simons doesn’t start at Jil Sander until next month, but the Belgian designer began the initiation process over the weekend in Italy. First he presented his spring-summer 2005 men’s show in Florence Friday night where his new boss, Prada chief Patrizio Bertelli, showed up. Held in the graceful Boboli Gardens, Simons sent out a mesmerizing mix of voluminous pleated, high-waited pants, skin-slimming web knits and gauzy billowing trenches. It was Bertelli’s first Simons show and the Italian executive seemed pleased with what he saw. “It was beautiful; interesting; of this moment but also of the future,” Bertelli said backstage following the show. However he said it was “too early” to talk about possible synergies and differences between Simons’ aesthetic and that of Jil Sander.

Two days later, it was the reserved Simons who made the guest appearance as he sat front row during the Jil Sander men’s spring-summer 2006 show in Milan on Sunday. “I’m here just to give a look at the collection,” Simons said, bringing his index finger to his eye.

Simons, the second designer other than Jil Sander herself to guide the creative direction of the brand, starts work on the Sander women’s collection this summer.