LAURYN LABEL: Clearly, songstress Lauryn Hill was taking diligent notes all those times she sat in the front row at Giorgio Armani’s shows. She was spotted on Thursday at Paris’ Première Vision textiles show, coming out... 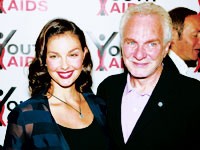 LAURYN LABEL: Clearly, songstress Lauryn Hill was taking diligent notes all those times she sat in the front row at Giorgio Armani’s shows. She was spotted on Thursday at Paris’ Première Vision textiles show, coming out of the booth set up by Reggiani, the high-end Italian mill known for stretch wovens. When asked the obvious question these days: Are you doing your own line, she said, “I’m thinking about it. I’m here doing research.”

PINNING AIDS: Many people have discussed many things at the rooftop bar of 60 Thompson, but perhaps few with as much passion and information as Ashley Judd on the AIDS crisis. “This isn’t a cause, this is a global emergency,” the actress said after speaking in a panel discussion downstairs on behalf of YouthAIDS, an organization that brings AIDS awareness to teens and young adults. Judd, who is YouthAIDS global ambassador, was joined by her sister Wynonna, Carlos and Deborah Santana, Dido, Teen People managing editor Amy Barnett, MAC chairman John Demsey, BMG president and chief operating officer Charles Goldstuck, YouthAIDS director Kate Roberts and jeweler David Yurman, who designed a pin and pendant benefitting YouthAIDS. Roberts saluted BMG’s and MAC’s efforts in fund-raising and AIDS awareness. The MAC AIDS Foundation was established 10 years ago and has since raised $37 million.

One hundred percent of sales of Yurman’s silver YouthAIDS pin and pendant will be donated to the organization. The pieces will be carried starting today at all David Yurman boutiques, select Saks Fifth Avenues, Bloomingdale’s and Marshall Field’s and on neimanmarcus.com. They will retail for $100. “It’s the gift that gives twice,” Roberts said before mentioning that it costs $10 to educate and protect one person. Judd quickly did the math and emphatically chimed in, “No, it’s the gift that gives 10 times.”

SAKS LADIES: With President Bush, John Kerry and more than 100 world leaders in New York for the United Nations General Assembly, getting around Manhattan on Monday may have been a little challenging. But obstacles never get in the way of the city’s top socialites, especially when it comes to a little charity and retail therapy. So a group of well-heeled women came to Saks Fifth Avenue to toast Jamee Gregory, Leslie Jones and Lavinia Snyder on behalf of the 16th annual preview party for The International Fine Art and Antique Dealers Show, which benefits The Society of Memorial Sloan-Kettering Cancer Center. They included Shoshanna Gruss, Muffie Potter Aston, Bettina Zilkha, Joanne de Guardiola, Coco Kopelman, Alexandra Lind-Rose, Hilary Geary, Emilia Fanjul, Somers Farkas and Karen LeFrak.

“One of the great perks aside from raising money for Memorial Sloan-Kettering is that I get to wear Graff jewelry at the opening,” quipped Gregory,” and what could be more fun?”

REEL LIFE: It’s a scene familiar to many Chanel employees: a man and his mistress shopping for sexy black dresses in the Madison Avenue boutique. But when the couple in question is Graydon Carter and Susan Sarandon and the scene is in the upcoming Jude Law flick “Alfie,” it’s cause for celebration. On Tuesday night at Soho House, Chanel hosted a screening of the film for members of the fashion press, who included Harper’s Bazaar’s Glenda Bailey and Vogue’s Grace Coddington. The crowd, clearly amused by all the sartorial references, let out a collective laugh when Law’s character admits that he’s “a bit of a fashion whore.” Director Charles Shyer’s daughter, Annie Meyers-Shyer, who just happens to work in the accessories department at Bazaar, introduced the film. “I don’t know what’s more exciting for me,” she said. “To be introducing my father’s film or getting my first Chanel jacket.” Well, it was borrowed, but a girl can try.

FASHION PLATÉE: When the New York City Opera stages its revival of Rameau’s comic opera ballet “Platée” beginning on Tuesday, the company will have a heightened sense of levity thanks to Isaac Mizrahi.

Mizrahi designed costumes for the production, first staged at the City Opera in 2000, which retells the French baroque satire of the frog princess Platée. To teach his jealous wife Juno a lesson, a character named Jupiter pretends to court the vain frog princess, ultimately teaching the gods the true meaning of trust and Platée humility.

“The reason I adored working on ‘Platée’ was because (a) I adore the music and (b) I relate to her, the frog queen,” Mizrahi said. “Somewhere it’s my life story, living in a swamp, being tricked by the gods and goddesses.”

“Platée,” featuring Jean-Paul Fouchécourt in the title role and directed and choreographed by Mizrahi’s friend Mark Morris, will be performed through Oct. 16.