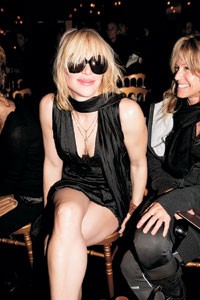 LOVE SONG: “I’m a Lady Who Lunches now,” Courtney Love said at Stella McCartney Thursday morning. But she has a competitive streak. “I heard Madonna was doing Coachella [Music Festival], which piquéd my interest as I was thinking about doing it, too,” she said, adding she’s finishing up her latest album for a fall release. “I’m thinking about calling it ‘How Dirty Girls Clean Up,'” she said. “I wrote most of the songs while I was in rehab.” While Love lapped up all the front-row attention, Kate Hudson was trying not to be conspicuous. The actress arrived after the show had already started and stood discreetly in the back, refusing a seat offered to her. Meanwhile, Bode Miller, the hyped-up Olympic ski star who bombed at the Turin games without a single medal (but was spotted in various nightclubs), also stood in the back of the room. “I’ve been trying to avoid the flashbulbs for the last 10 years,” he said. His Stella link? His sister dates one of McCartney’s cousins.

GATHERING MOSS: Guess who’s back on the runway: Kate Moss. Look out for the supermodel to close her friend Alexander McQueen‘s show tonight, which is said to be something of an extravaganza. McQueen wouldn’t give any secrets away, but said of the finale: “It’s never been done before in the world.”

FAIR GAME: Chanel is in talks with Keira Knightley for an upcoming beauty campaign, according to sources. A Chanel spokeswoman in Paris had no comment Thursday. Meanwhile, there will be no shortage of star power in Chanel’s front row today. Among those expected are Sting, Marianne Faithfull and a string of top French actresses.

PINK PANTHERS: Emanuel Ungaro’s front row Thursday had no celebrities — but plenty of intrigue. For starters, many caught their first glimpse of Asim Abdullah, the San Francisco-based high-tech tycoon who bought the French house last year and poached Roberto Cavalli designer Peter Dundas. “I feel great. I think the team’s done a wonderful job,” he said, beaming a big smile. “[Peter] is the right kind of leader to drive this house.” But the chief executive slot remains in question. Paolo De Spirt, who is expected to resign as ceo, was seated next to Abdullah during the show. But over in the next block sat Mounir Moufarrige, formerly head of Chloé and recently involved with many different companies, including Worth and Goyard. Moufarrige would only say, “I always look at a lot of houses and new talent.”

GYPSY KING: When it comes to seducing an audience, Joaquín Cortés has it in spades. The dancer took center stage at Jean Paul Gaultier‘s headquarters Wednesday night, stomping, strutting and showing off his fancy footwork — and Gaultier-designed costumes. “Apparently for the public show he’s going to start out naked,” quipped Gaultier while imitating a flamenco stance. But the designer said he wasn’t ready for lessons just yet. “I don’t have all that energy!”

BUGGING OUT: Tilda Swinton, filming “Michael Clayton” in New York opposite George Clooney, managed to tear herself away from work to take in the Yves Saint Laurent show Thursday night. “He’s divine,” she said of her co-star. Kristin Scott Thomas, who’s been busy with her new film, “The Walker,” said her 18-year-old daughter, Hannah Oliviennes, was getting her baccalaureate. “She’s going to wind up doing something more serious [than acting], she quipped. Down the row amongst the likes of Catherine Deneuve and Amira Casar, one guest was hooked to a microphone: Pierre Bergé. The former YSL dean said he’s the subject of an upcoming show on French television in April, which should wrap up soon. “It’s only 26 minutes,” he said. “You know me — that’s easy to fill.”

ELECTRIC AND ECLECTIC: Actresses and pop stars aren’t the only ones designing clothes these days. “I got bored with searching for clothing for my concerts so I decided to do it myself,” said Berlin-based electro figure Ellen Allien, among the front-row guests at Olivier Theyskens‘ show for Rochas on Wednesday night. Allien, who is founder of BPitch Control Records and an in-demand DJ, said she would unveil her women’s wear collection in three weeks. Seated directly behind her was another unexpected personality: Puig’s Mario Grauso, who oversees the fashion houses Paco Rabanne, Nina Ricci and Carolina Herrera. But he demurred when questioned about his presence: “Olivier’s a friend. He asked me to come to his show. I admire his work.”

WINTOUR TIME: Anna Wintour isn’t ringside at the Paris shows, but her presence is still being felt — at least by the Canal Plus production team. It’s preparing a short feature examining the mystique of the Vogue editor in chief. The program is scheduled to air on French television in April. Canal Plus interviewed Wintour on Avenue Montaigne on Sunday, when the editor stopped briefly into town after Milan to preview a handful of collections, and the station is asking designers to contribute their two cents on what keeps the Vogue editor at fashion’s fore.

HAVING A CRISTOBAL: “When I started my house, I felt like I knew nothing,” Hubert de Givenchy reminisced Thursday night as he hosted the opening of the Balenciaga exhibit at the Mona Bismarck foundation. “I knew how to make a few blouses. I thought I had a fresh approach. But when I met Balenciaga, I wanted to start all over. He taught me everything.” Bismarck’s 40 dresses and photos offer homage to the late Spanish couturier and one of his chicest clients. Meanwhile, Givenchy gave a status report on the foundation dedicated to Balenciaga now under construction in Getaria, Spain. “We’re getting closer to the end now,” he said. “We should open in two years.”

SWISS TWIST: Come the fall shows, some members of the fashion pack are sure to make a detour between Milan and Paris to tiny St. Gallen, Switzerland. That’s because fast-growing Akris is mounting a retrospective at the request of the city’s famous textile museum. The exhibition, curated by designer Albert Kriemler, will showcase the company’s 84 years of history and design philosophy. It will run Sept. 1-Jan. 7, and is one of a series of events and exhibits dubbed “Art and Dress.”

MARC WITH ART: Since Tuesday, Bloomingdale’s Lexington Avenue windows have featured looks from Marc Jacobs‘ spring collection in an artful setting. To bring out a sense of spring, the retailer is displaying the collection against striking paintings of roses by New York-based artist Jaime Arredondo. “In the past, Marc Jacobs quite frequently has featured flowers as a part of the decor during fashion shows, so it was natural to feature them as a backdrop,” said Joe Cotugno, vice president of visual merchandising at Bloomingdale’s, who worked with the store’s window director, Harry Medina, on creating these displays. “What’s more spring than flowers?” Cotugno added. Bloomingdale’s features the giant oil color paintings of the roses, which are typically priced from about $5,000 to $15,000, but isn’t selling them. “I didn’t know much about Marc Jacobs,” Arredondo said. “I also teach at New York University and at the New School and my female students go crazy over Marc Jacobs. Now that I am showing my work next to his, I like him even more.”

HIGHS AND LOWS: It’s not often that a designer admits to taking drugs, but according to APC’s Jean Touitou, who says he plans to record an album of Bob Dylan covers this spring, only bordeaux and tranquilizers can control stage fright. “I’ve tested all sorts of concoctions and it’s the only thing that works,” said Touitou at the brand’s fashion week party at Regine’s. But he’s not the only one heading for the studio. British singer Jarvis Cocker, who turned up at the event with pal Giles Deacon, said he’ll be off to London next week to start work on his new solo album. “I’m having my last bit of fun before getting down to work,” said Cocker.

GIRLS ON FILM: Kirsten Dunst made an unexpected appearance at one of Paris’ fashion parties Wednesday night — on film, that is. The actress was the star of a short-and-sweet black-and-white movie, directed by Ellen Von Unwerth and showcasing designer Erin Fetherston‘s ethereal fall collection. The designer also had real models wearing her pretty party frocks, inspired by Wendy from “Peter Pan.” Meanwhile, Gabi Asfour, who turned up to watch, said that for next season his own label, As Four, may well be heading toward Paris to put on a catwalk show.

PAJAMA PARTY: Mathis Bar, the endlessly fashionable drinking hole, soon will offer a sleepover option. Owner Gérald Nanty has just purchased the 26-room hotel situated upstairs above a bar frequented by the likes of Charlotte Gainsbourg, Kate Moss and Sofia Coppola. Nanty said he plans to tap various interior designers including Jacques Grange and Serge Robin to redecorate the hotel in a Thirties vein in time for the shows in the fall.

COLD FRONT: Perhaps it’s the Olympic vibe or the sprinkling of snowflakes during the Paris collections that’s sending celebrities to the slopes. “I’m going on a ski trip,” said Ludivine Sagnier, who sat next to Virginie Ledoyen at the Celine show on Thursday. But Sagnier, who will start work on two new films next month, “A Secret” and “Molière,” has her own idea of the sport. “I’m more of the mulled wine-type skier,” she quipped.

BOOT STRAPS: Roger Vivier, the French footwear brand that was relaunched in 2003 by Tod’s Group, is looking to expand its accessories empire. “Vivier had such an imaginative approach to his designs that it’s left a huge scope for brand extensions,” said creative director Bruno Frisoni, who already has introduced some bags and jewelry. In tandem with a new Vivier book, this weekend Frisoni will unveil a full-fledged leather goods line as well as gloves and sunglasses. A scent is also in the pipeline. To house the rapidly expanding categories, two flagships are set to open this year, on London’s Sloane Street in May and New York’s Madison Avenue in September. They will join existing freestanding stores in Paris and Hong Kong. “The stores will be inspired by our Parisian flagship in terms of design,” said Frisoni, gesturing to the Paris store’s mix of antiques and art with Sixties-style plastic furniture. “Obviously, it’s an environment for selling, but we want customers to feel that they can hang out.”