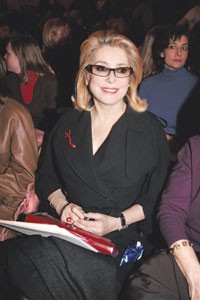 MAD FOR MADGE: Oh, the power of paper. Madonna‘s arrival at Jean Paul Gaultier‘s show Wednesday unleashed pandemonium, the paparazzi surging dangerously. But once in her seat, the queen of pop raised her program folder to cover her face — and a round of laughs diffused some of the tension. Once her burly bodyguards cleared the runway, Madonna jumped from her seat to greet French photographer Jean-Baptiste Mondino. As it turns out, the queen of pop is quite the polyglot, finding time to exchange a few words in Spanish with her front-row neighbor, flamenco dancer Joachim Cortez. Gaultier also is designing costumes for Cortez and his 17 musicians for his new show, dubbed “My Loneliness.” It will be previewed March 1 at Gaultier’s atelier, followed by public performances at Le Grand Rex. “The costumes are inspired from Eastern European gypsies during the Thirties and Forties,” Cortez said. Meanwhile, “Amélie” director Jean-Pierre Jeunet said he had just finished writing a screenplay for the best-selling novel “Life of Pi.” “I loved the book,” he said. “I hope we’ll start filming sometime later this year.” Across the room, Catherine Deneuve commented on her recent whirlwind tour in Los Angeles, where she was promoting her role as the newest beauty icon for MAC cosmetics. “I didn’t even have a second to think,” said the French screen legend. “It was a mass of parties. I love L.A., but there were just a few too many parties for my taste.”

SECOND THOUGHTS?: John Galliano, responsible for a Dior couture show and a John Galliano men’s wear show this week in Paris, may be taking on yet another major design task. Sources said he’s plotting a second women’s ready-to-wear line for his signature house with Italy’s IT Holding, maker of such brands as Gianfranco Ferré, Just Cavalli and Exte. Details could not be learned, but the first collection could be ready as soon as summer.

ROXY ROLLERS: Bryan Ferry gave the couture crowd a thrill Tuesday night as the featured performer at Chloé’s rollicking party at the Hotel de la Monnaie to celebrate its second Paris boutique. “I was born in the Eighties and his music’s from the Eighties and I love it,” gushed model Sasha Pivovarova, who boogied alongside designer Alber Elbaz and pop star Jarvis Cocker. “This is one of my favorites,” chirped model-turned-photographer Astrid Munoz, who kicked up her heels to “Don’t Stop the Dance.” Munoz just finished her first self-portrait for French Vogue. Daphne Guinness, an old pal of the singer’s, raved about his stylish look. “He’s always had the coolest album covers,” she pronounced. Later, over postshow drinks, Ferry revealed he’s working on a new Roxy Music album to be released this year. “I’ve always been into clothes,” he added. “Maybe it comes from the fact that I worked in a tailor’s shop as a boy.”