MIDNIGHT RAMBLER: Few celebrities may be gracing the front rows of the Paris shows, but – heck – people gotta eat. Nicole Kidman, in town for this morning’s Chanel show, dined Wednesday night at Thiou, a Thai restaurant... 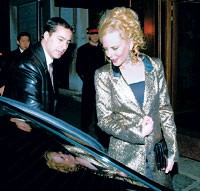 MIDNIGHT RAMBLER: Few celebrities may be gracing the front rows of the Paris shows, but – heck – people gotta eat. Nicole Kidman, in town for this morning’s Chanel show, dined Wednesday night at Thiou, a Thai restaurant popular with fashion folk, while just down the road, Mick Jagger supped with L’Wren Scott, Daphne Guinness and others at Le Voltaire. Later, Jagger and Kidman joined up at the Westminster Hotel’s presidential suite and strode arm-in-arm into a party for model Riley Keough, the granddaughter of Elvis Presley. It was a rock ’n’ roll moment. But with Keough in a campaign for Dior and Kidman in another for Chanel, who could blame Jagger for being a bit philosophical about it all. “Fashion, it’s just like life. It’s just a feeling,” he mused.

ON THE MONEY: Dior’s Sidney Toledano and Claus-Dietrich Lahrs hosted a small press dinner at Kaviar Kaspa on Tuesday night. Not surprisingly, one point of conversation was the just-out news that Helmut Lang had sold his remaining stake in his company to Prada. Candy Pratts Price bemoaned the fact that Lang no longer owns his name. “Every designer needs a Robert Duffy,” she said, referring to the president of Marc Jacobs International. “No designer can do it all himself — all the business stuff.” “Yes,” Toledano concurred. “And he also needs the guy with the money.”

MOMMY DEAREST: Gwyneth Paltrow, among the high-profile guests at Stella McCartney on Thursday, said she’s stepped seamlessly into the role of mother. “It’s the most incredible thing on earth,” said Paltrow backstage while she chatted with McCartney. “It’s a life-changing experience.” Paltrow, who earlier this year gave birth to a daughter, Apple, said she was in town to support McCartney — where she wore the designer’s new diamond and platinum right-hand bow ring — and to attend a dinner in her honor thrown by Valentino. In fact, Paltrow attended the show with Valentino’s Giancarlo Giammetti, who chatted with his other profile guests in the row, including Miramax’s Harvey Weinstein.

At the dinner, meanwhile, McCartney revealed she’s joining the motherhood club — she’s three months pregnant. Loulou de la Falaise said, “This party’s all about the next generation. Apple is upstairs, Kate Betts is pregnant and now Stella McCartney is pregnant, too.” De la Falaise updated the room on her own daughter who is interning at John Galliano while studying at the Sorbonne.

BIRTHDAY SUIT: The Council of Fashion Designers of America is celebrating the 10th anniversary of its Fashion Targets Breast Cancer campaign with a specially designed T-shirt that made its debut on QVC last week, selling 1,300 units in 30 minutes. It may have helped that Betsey Johnson and Stan Herman, president of the CFDA, went on the air to pitch the $22.50 T-shirts while talking about the history of the CFDA Foundation, which has raised more than $40 million for breast cancer charities in its first decade. The special T-shirt, which is an exclusive to QVC and qvc.com, features the Fashion Targets Breast Cancer bull’s-eye logo covered with an A-to-Z of designers who have participated in the CFDA drive, from Joseph Abboud to Katrin Zimmermann. The back of the shirt reads like a concert tour, with a list of the 10 participating countries where FTBC has expanded and the year that their local campaigns began. The shirts will be available throughout October and will also be featured on QVC on Oct. 12 at 6 p.m. with an appearance by Dennis Basso and Pamela Dennis, and again on Oct. 29 at 7 a.m. with Bob Mackie and Dana Buchman.

RED ALERT: It was a family affair Wednesday night in Paris as Ferruccio and Leonardo Ferragamo celebrated the overhaul of their flagship Salvatore Ferragamo on the Avenue Montaigne. Ferruccio even shipped over cases of Il Borro, the red wine he produces on his Tuscan property, for the likes of Claudia Cardinale. Neiman Marcus’s Burt Tansky marveled at how the Avenue Montaigne has become “the Madison Avenue of Paris,” something it wasn’t when Ferragamo first put up its shingle in 1993. The 4,300-square-foot unit boasts a new facade and a chic, spacious design.

ITALIANS DO IT BETTER: After Roberto Cavalli acted as Grand Marshal of the Columbus Day Parade in Manhattan last year, the Italian fashion community is once again sending an emissary of style to represent Italian interests to curious onlookers at this year’s parade on Monday. Although race car driver Mario Andretti will serve as Grand Marshall along the parade route, up Fifth Avenue from 44th Street, he will be joined by a delegation from Milan featuring several models dressed in Missoni, perched atop a vintage Alfa Romeo Giulietta.

O SAY CAN YOU SEA: Something fishy was going on in the front row of the Celine show – literally. Ludivine Sagnier and her front-row neighbor, Virginie Ledoyen, recently finished lending their voices to the French version of “Shark Tale,” the animated undersea movie by the makers of “Shrek.” “It was a lot of fun to do,” said Ledoyen. Asked how she approached the role of, well, a fish, Sagnier replied: “You just jump right in!”

SHOPKEEPER: The Museum of Fashion and Textiles in Paris has developed an innovative method for getting visitors to pop into the museum’s boutique. “I’m here to attract all the beautiful women into the shop,” joked Jean-Louis Dumas at Wednesday night’s opening of the “Le Cas du Sac,” an exhibition co-organized by Hermès that traces the bag’s evolution in civilizations across the world. Dumas, Hermès chairman, said he was pleased with the crowds that surged through the exhibit. “We tried to honor the bag, not a particular trademark,” said Dumas. “We wanted to demonstrate the man-made talent and reiterate there are no good trees without good roots.”

MOON WALK: Forget moon boots. Nike is on to a far more innovative space shoe. The activewear giant joined forces with industrial designer Marc Newson to create “Zvezdochka,” a sneaker named after the first Russian dog to be sent into orbit in 1961. “I wanted to create a shoe for a zero gravity environment,” said Newson at a Nike party Wednesday night in Paris. Newson said he spent several years researching the project with the Russian Space Agency to create the high tech shoe. “It’s very modern and very conceptual,” said Azzedine Alaïa, who accompanied the designer to the party, albeit in more down-to-earth footwear.