MODEL CITIZEN: Marc Jacobs, who has populated quirky ad campaigns for his signature collection with artists and actresses, is planning to go back to a model for his upcoming fall effort. Mind you, it’s a... 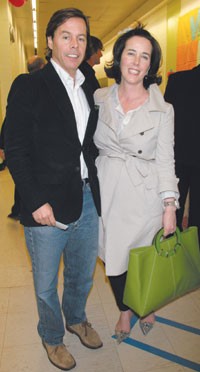 MODEL CITIZEN: Marc Jacobs, who has populated quirky ad campaigns for his signature collection with artists and actresses, is planning to go back to a model for his upcoming fall effort. Mind you, it’s a “very special” model: Kristen McMenamy. “I always run into her when I go to London and she’s almost always at every art opening I go to,” Jacobs related. McMenamy is slated to pose for Juergen Teller for the Jacobs spots, which recently have featured Cindy Sherman, Rachel Feinstein, Charlotte Rampling and Teller himself.

FALLING IN GLOVE: Could Karl Lagerfeld do for gloves what he’s done for rings? The couturier, who helped set a new fashion trend by wearing large silver rings by the fistful, lately has been sporting fingerless leather gloves made especially for him by Gants Causse, which also supplies Chanel. “I’ve ordered them in every color,” Lagerfeld said of his latest fashion whim. He hasn’t given up on rings and continues to wear them — on his exposed fingertips.

OVER THE RAINBOW: Kate Spade knows about color and now, apparently, so does Mayor Michael Bloomberg. “It’s yellow, it’s orange. Who knew? It’s saffron,” he joked, referencing Jean Claude and Christo’s Gates project while attending the Stir, Splatter + Roll event at Martin Luther King Jr. High School. The event was to raise funds for the nonprofit organization Publicolor, which brightens New York’s public schools by painting them all shades of the rainbow and also to honor Kate Spade, whose love of color is renowned and who has had a long-term commitment to the group. More than $500,000 was raised through a silent and live auction. A striped coal bag from Jack Spade also will be sold in Jack Spade and Kate Spade stores, with 25 percent of sales going to Publicolor. Before dinner, some festive guests donned the white Tyvek jumpsuits and booties that were being handed out and painted canvases that would be sold later. The experience left those who didn’t wear protection wishing they had.

“I hope it’s water-soluble,” said one who found paint on his sleeve.

“I love this suit,” said Stanley Tucci, who was wearing Hugo Boss and led the live auction, “but it may have been a mistake wearing it here.”

FOR ART’S SAKE: Patti Hansen and her daughters, Theodora and Alexandra Richards, joined Massimo Ferragamo, chairman of Ferragamo USA, in hosting the “Mother and Child” art exhibition Thursday night in the gallery of Ferragamo’s flagship in New York. The show featured works with a familial perspective by artists such as Steven Klein, Elizabeth Peyton and Sam Taylor-Wood. The event benefited the National Alliance for Autism Research.

“It’s great that they [Ferragamo] are helping the children,” said Hansen. “That’s why I’m here.”

Alexandra Richards, who was wearing a Ferragamo signature scarf as a halter top with Rock & Republic jeans and is studying painting and drawing at the school of Visual Arts, especially liked Peyton’s incarnation of Jackie O walking with a preteen JFK Jr. done in watercolor.

Also in attendance were Isabella Rossellini, fresh off the set of “Alias,” and her daughter, Elettra Rossellini, who is in Ferragamo’s advertising campaign. “Ferragamo is a good friend of ours,” said Isabella. “After all, they’re Italian.”