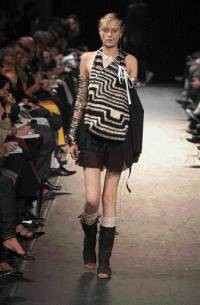 MORE, MORE MOREAU: Karl Lagerfeld, Azzedine Alaïa, Betty Catroux, Georgina Brandolini and Anne Parillaud were among the glitterati who came out to see Calvin Klein and fete his new Avenue Montaigne flagship Thursday night. But they had heavy competition for the designer’s affections. Klein was practically joined at the hip to the one and only Jeanne Moreau. “I’m in love with this woman,” Klein said of the legendary actress, his dinner date the past four nights in Rome and in Paris. “She’s incredible. She tells me what to do.” Does he take her advice? “Are you crazy?” Klein asked. “Of course I do.” Over in the corner, Amanda Harlech was talking about her literary ambitions, having recently edited the works of poet Alan Seeger. “I really should write my book,” she said. “But I’m too much of a wordsmith. I have to go back and take out all the adjectives.” Harlech said she feels some pressure to get it done. She had the title all set a few years ago: “Heavy Water.” “And then Martin Amis took it,” she quipped.

EARLY BIRD: As if he doesn’t do enough runway shows in a season, Karl Lagerfeld has just added one more. On Sunday night, he plans to stage a “mini” version of the Chanel spring collection at its Rue Cambon couture salons. Turns out many top editors, including Vogue’s Anna Wintour, won’t be sticking around Paris long enough for Chanel’s scheduled show Tuesday. So Lagerfeld, always up for a fashion show, plans to produce some key looks on a handful of models.

CHEERING SECTION: You can usually count on designers galore at a Yohji Yamamoto show. But on Thursday, the Japanese creator surprised the fashion flock by turning up front row at Costume National — wearing the same raspberry fedora he wore when he took his bow at the Y’s show Wednesday. Yamamoto said he was out to cheer Costume designer Ennio Capasa, who came to Japan when he was 23 and worked with him as an assistant. “He’s my student,” grinned the proud teacher.

SAY CHEESE: It was celebrity gridlock at the Christian Dior show Thursday, with famous faces visible up into the third row. “This is crazy. I’m reentering this part of my life,” said Claire Danes, who just wrapped up filming “Terminator 3,” motioning toward the paparazzi frenzy.

A student at Yale, Danes confessed she’s been out of the fashion circuit. “At university, comfort is key,” she said. Down the row was Bette Midler turning the tables and photographing the models. “I have no memory,” she said. “Photos help me remember.” Meanwhile, Penélope Cruz took five from filming in Paris opposite Vincent Perez in the remake of French film “Fanfan la Tulipe,” produced by Luc Besson. But she wasn’t planning to join the Dior party later that night for the launch of Addict perfume. She was due back on the set at 4 a.m. Asked what the film was about, Cruz paused and offered: “It’s an adventure, kind of like this.”

POINTS EAST: Azzedine Alaïa is planning a major fashion show — but not this week in Paris. He’s the guest of honor at the Singapore Fashion Festival March 21 to April 5. He took time out from his preparations for the show, and fittings with Stephanie Seymour, to attend Junya Watanabe on Thursday. The Singapore festival is also headlined by local hero Andrew Gn, who will reprise his spring 2003 show, scheduled for Tuesday in Paris. There’s also an Alaïa retrospective and photo exhibition.

WHERE’S WILLIAM? What do Bill Clinton, Damon Dash and Vin Diesel have in common? All were expected at various Paris night spots late Wednesday. A crowd of fashion types had assembled at the Plaza Athenée bar awaiting the former U.S. president, but only Diesel showed up. Clinton was even rumored to be having dinner at the White House, a restaurant on Avenue Montaigne. But that would have been too perfect. Clinton is believed to be leaving Paris for Germany today.

TOM TOM CLUB: All the Gucci bigwigs came out en masse Wednesday night to inaugurate their second Paris address, on the Avenue Montaigne. Tom Ford greeted guests and posed with Tommy Hilfiger, who’s in town scouting for store space himself. But Ford had another brand on his mind. “I’ve got a storm inside,” he said. “Saint Laurent’s only in five days and I’m still recovering from Gucci.” Not that he’s burning the candle at both ends. “I’m a late-night kind of a guy,” he said, “but not when it comes to work.”

When Ford unveiled the ads for his first men’s YSL fragrance, M7, it was unclear whether any American magazine would publish the picture of a nude, reclining and very hairy man — especially the “Full Monty” version. But V magazine took it for its November/December issue, due out in a few weeks. V’s Stephen Gan acknowledged it’s a risqué image, but “very, very tasteful.”

REI OF LIGHT: Look who’s in the peanut gallery: Rei Kawakubo. The designer was in the standing section at the Undercover show Wednesday night to cheer on her acolyte Jun Takahashi. Kawakubo carries his Undercover collection in her Comme des Garçons/Corso Como store in Tokyo and encouraged Takahashi to show in Paris, lending moral support and logistical advice. “My garments are a merger of sophisticated and street fashions,” Takahashi said in an interview. “I create clothes that are new, strong and practical.” Strong indeed. In a collection titled “Scab,” Takahashi blended punk and ethnic elements to apocalyptic effect. The blend was intriguing and thought-provoking — and slim pants, decorated with crude patches à la Edward Scissorhands, were fetching. But just to end on a provocative note, he sent out a parade of fluorescent burkas for the finale.

FACE TIME: Natalia Vodianova, whom some have pegged as the next Kate Moss, is one of the hottest models stalking runways this season. And word has it she has the inside track as the new face of Calvin Klein.

WATCH OUT: Sources say Prada is set to unveil its first timepiece later this month — and it will be a limited-edition style. Further details could not immediately be learned, and Prada had no comment.

Meanwhile, the first few days of the Louis Vuitton Cup in New Zealand have been challenging for Prada chief Patrizio Bertelli. His syndicate, Luna Rossa, lost in the first round and now he’s reportedly fired longtime Luna Rossa design director Doug Peterson. According to the official Louis Vuitton Cup Web site, Bertelli issued a terse statement saying Peterson was no longer design director of Prada Challenge 2003 and that he “no longer holds any operative role within the team.” A Prada spokeswoman in Milan had no comment, but said that Bertelli would hold a press conference in Auckland today to discuss developments with Luna Rossa.

CHINESE, ANYONE?: While Asian influences were wafting through the Italian collections, Pierre Cardin was ahead of the game. Fashion’s king of licenses was hosting a festival of obscure Chinese films at his Espace Cardin. It runs through Oct. 11. Among the films being screened is “Unknown Pleasures,” which was in contention for the Golden Palm in Cannes this year. On Thursday, Cardin also inaugurated a month-long exhibition of contemporary Chinese art of the same venue. Cardin has long fostered ties with China, building his brand’s reputation during the last few decades with myriad licensing deals. He even operates branches of his Maxim’s restaurants in Beijing and Shanghai.

FAST FASHION: British stylist and editor Katie Grand has taken the expression “runway to reality” to a new zenith. Barely off the plane from Milan, Grand was attending Paris shows dressed head-to-toe in spring 2003 Miu Miu. She styled that show and also the Prada one earlier in the week.

OPERA IN THE SHEETS: Bulgari-backed investment fund Opera is close to completing a deal to buy luxury linens and loungewear company Frette from Fin.part, according to Renato Preti, who manages the Opera fund. “We are negotiating. It should be another month,” he said on the sidelines of a luxury goods conference in Milan. As reported, Fin.part said in June it was talking with several prospective buyers for Frette, including Opera. It’s unclear what Fin.part is asking for Frette, but the brand generated about $135 million in sales in 2001. Fin.part declined to comment.

CURIOUS GEORGE IN ITALY: George Clooney took a break from the fashion shows in Milan Thursday afternoon to take in his new digs overlooking Lake Como. As he whiled away the afternoon on Villa D’Este’s terrace, Clooney told passers-by that he bought nearby Villa Oleander from the Heinz family, and that he plans to spend a lot of time there and will join Villa D’Este’s sports club to play tennis and stay in shape. He’s also learning Italian.