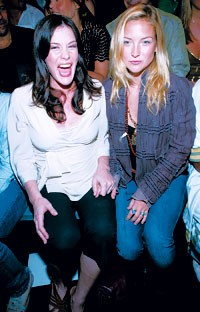 NO COMMENT: For those who attended the Marc Jacobs show and accompanying fragrance launch on Sept. 10, 2001, the Marc Jacobs show on Monday night and ensuing party was a serious case of déjà vu: same time, same place, different fragrance. But the memory of that bacchanal didn’t seem to affect anyone’s state of mind this time, even though the party decor — tables laden with fruits, nuts and hunks of Parmesan cheese — was eerily similar.

Still, there were some new faces in the front row — Ashley and Mary-Kate Olsen, Natalie Portman, Jennifer Lopez and Marc Anthony — and a new accessory: your own security guard to fend off the press. Even Winona Ryder had two pieces of beefcake watching over her, but the real question was — did anyone care?

Rachel Feinstein, the star of Marc Jacobs’ fall 2004 campaign, has found that people really don’t care. “No one knows who the hell I am,” she said, laughing at the fact that a publicist earlier had escorted her past the paparazzi pit instructing her to pose for them. “Nobody took my picture,” said Feinstein. “The joke all along has been that I’m going to be so last season.”

But the show was still one of the hottest tickets of the week, so much so that people were calling almost up to the start to get in. Benicio Del Toro and Jerry Bruckheimer desperately phoned around 8 p.m. to see if they could nail tickets, but a Jacobs rep responded to the request, “Are you kidding? We turned the Williams sisters away at 4.” (Del Toro and Bruckheimer did get in to the after-party, though.)

Though the celebs with their bodyguards in tow split after the show, the more laid-back ones stuck around for the party. A pregnant Liv Tyler and Kate Hudson drove the paparazzi wild, seated at one of the long, low-slung dinner tables. Kate Bosworth, in town to shoot the Revlon ad campaign, smoked cigarettes with a very scruffy Josh Hartnett. “Tomorrow we’re shooting the commercial, so I’ve got to go home early,” she said.

For his part, Hartnett tried to analyze the party scene: “From an anthropological standpoint, it’s really impressive,” he said. “But I just like the buzz.”

Maybe Hartnett, like Brian Grazer, should stick with his day job. Grazer, who milled around the after-party attached at the hip to Viacom’s Tom Freston, tried to comment on the artistic significance of Jacobs’ spring collection. “His fashion has really evolved. All the colors — I think it’s just going to have a big impact on the culture,” he said. Cut him some slack — it was his first fashion show in 13 years.

Grazer said movies about fashion can be “too abstract.” In other words, they are box-office bombs. Still, he’s thinking about rolling the dice.

CAUSE CELEBRE: Who is Leonard Peltier? That was the question among those who attended the Anna Sui and Marc Jacobs shows, both of whom had at the bottom of their show notes the cryptic line: Leonard Peltier is Innocent. Turns out Sui and Jacobs were helping out their friend Vivienne Westwood, who has joined the cause to free Peltier, a Native American considered by organizations like Amnesty International to be a political prisoner. Peltier was convicted in 1975 for the deaths of two FBI agents who were killed during a 1975 shoot-out on the Pine Ridge Indian reservation. Jacobs said Westwood is trying to line up fashion industry support for the Peltier cause and told him,”All you have to do is put it on your program notes and everyone who asks, refer them to me.”

ANOTHER ENTRANT: Serena Williams may have lost her U.S. Open match to Jennifer Capriati, but she certainly isn’t sitting home pouting about it. The tennis diva-cum-fashionista has been all over town this week, hitting shows such as Oscar de la Renta and Calvin Klein, as well as the Sean John store opening and Coty parties. “I am going to a lot of events this week because I am trying to learn more about the business,” said Williams Tuesday night at a party for Self Magazine’s new three-floor Self Center spa in the West Village, which is open only for the next month as part of the magazine’s 25th-anniversary celebrations. She said she’s interested in staging a runway show next year for her budding Aneres fashion line, but will likely do it away from the tents, adding: “I am not ready for that yet.” Williams sported decidedly un-tennislike attire: She was decked out in sky-high black stilettos and a cleavage-bearing fitted black dress with an open back, although when asked who the dress designer was, she replied that she picked it up at Jacobson’s but didn’t know who made it. Williams chatted briefly with William Lauder, and was overhead asking him if his company was owned by Coty, to which Lauder quickly replied, “No, that is a major competitor of ours.”

IT TAKES ALL KINDS: While the average New Yorker has little chance of getting into the big-name fashion shows, passersby on West 39th Street and Sixth Avenue Monday afternoon were treated to a brief dose of catwalk antics.

Under a banner reading “Who Gives A…,” which hung over a toilet bowl, models paraded along a runway made of folding tables bearing a variety of novelty handbags that alternately took slaps at the Bush administration and other celebrities. One bag, named the “Michael Jackson,” was designed to look like an upside-down baby, while the “Janet Jackson” included a replica of a bared breast.

The show attracted a crowd of about 50 people, and took up both parking lanes.

When the crew — outfitted in official Olympus Fashion Week T-shirts — started to break the set, the graying, bearded impresario behind it identified himself as Itsi Atkins and said the performance was by a group called “Models Against Bush.”

“My goal is to design wearable art that makes political statements,” said the designer, cradling a bag designed to resemble his head. He said he’d also taken on issues including toxic waste and environmental damage.

Atkins’ previous claim to fame was as head of a group of Manhattan Segway enthusiasts.

GIVE ME A CALL: Waiting time at shows can be filled in with a variety of activities — reading, catching up on the gossip or, in some cases, looking for business. Take Patrick Demarchelier at Oscar de la Renta, who seized the downtime before the start to offer his photography services to Donald Trump and his fiancee, Melania Knauss, “for something before the wedding. An invitation, perhaps?”

AMAZON WIDENS: Buyers from Amazon.com were spotted shopping the ASR show in San Diego this past weekend for swimwear from lines such as Sauvage and Op. The online shopping behemoth, which previously sold apparel and accessories only through partners such as the Gap, Nordstrom, Marshall Field’s and Target, has reportedly done so well with that program that it is now snapping up its own inventory to sell on the site. The company, which launched its current partner-assisted apparel channel in November 2002, began stealthily deploying its Amazon-owned inventory last month in the form of men’s underwear from Intimo, and is said to have 35 to 40 more vendors already in the pipeline. There’s no word yet on when Amazon plans to make it official.

MUSICALLY INCLINED: Some guests were just a little distracted by Donna Karan’s quasi-feminist soundtrack at her show on Monday, with its “I am woman, hear me roar” attitude, but not Bernadette Peters. “There’s a lot of great things you can wear, that off-the-shoulder suit in apricot being one of them,” she said. Peters is about to record her own album, singing the songs that she grew up with — “good music,” she said.

CARLA FOR CARMEN: Carla Gugino won rave reviews for her recent performance in Arthur Miller’s “After the Fall,” and she’s itching to go back on Broadway. “I would, and I will,” she said at Carmen Marc Valvo’s show on Tuesday afternoon. It was her first appearance at a fashion week show, she noted, adding that fashion spectating is a lot easier than walking the boards. “I don’t have to remember any lines.”

STONE COLD FOX: New York may be abuzz with fashion week, but the folks in Los Angeles are gearing up for their own major event this month: the Emmys. Actress Sharon Stone, at the Creative Arts Awards that were handed out on Sunday, set style standards early for the main awards ceremony, which airs Sept. 19. To accept her prize as Best Guest Actress in a Drama for her role on “The Practice,” Stone commissioned a combination of flora and diamonds from Kwiat. The jewelry house’s diamond, platinum and 18-karat gold Forties ginko leaf brooch was surrounded by rare Brassia orchids from florist The Velvet Garden. Think of it as a corsage fit for the

KNIT WITS: After spending much of the past week teaching celebrities, models and fashion editors to knit, Miriam Maltagliati said she’d been surprised by how fast some of them learned. Maltagliati, who owns Knit New York, a store on East 14th Street, was manning a VIP booth backstage in the tents co-sponsored by W Hotels and Cotton Incorporated.

While many of the designers had some experience with knitting needles, she said some of the models were slower to learn. But she had one unexpected student: the model Omahrya Mota.

“We got her to be quiet and actually knit,” Maltagliati said. “She zipped it when she needed to concentrate. She was on it, she was there.”

A more famous face made an appearance at the booth as well: Keith Richards, with his wife, Patti Hansen. Hansen entered the booth already possessed of considerable knitting skills. Maltagliati was mum as to what kind of student Richards proved to be.

KATIE’S CAUSE: Katie Couric, who sported a black knit poncho at her friend Carmen Marc Valvo’s show, which she got from a stranger on an airplane, said she loved wearing it. “I don’t have to hold my stomach in,” she joked while posing for photographers. Sporting a new haircut (“My mother said it had gotten too long”), Couric said she was at the show to support Valvo, who, as a colon cancer survivor, has helped her with her colon cancer efforts. Couric, who was seated next to Angela Bassett, said she only had time to attend three shows this week — Cynthia Steffe, Lloyd Klein and Valvo. “It’s a full time job,” she said.