Madeleine Vionnet, who churned out thousands of couture dresses in the Twenties and Thirties and once employed 1,200 seamstresses, will be back at retail next spring. 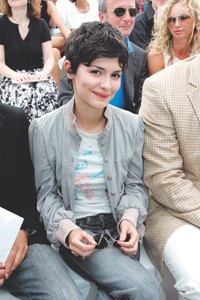 ON THE BIAS: Madeleine Vionnet, who churned out thousands of couture dresses in the Twenties and Thirties and once employed 1,200 seamstresses, will be back at retail next spring — exclusively at Barneys New York. As expected, the owner of the Vionnet trademark said Thursday it’s reintroducing the label with London-based Sophia Kokosalaki as creative director and a strong eveningwear focus. No runway show is planned for the October launch, but possibly next year. The Barneys exclusive, for locations in New York, Chicago, Beverly Hills, Dallas and Chicago, is for two seasons. Retail prices are still being made final, but are expected to range from $600 for tops up to $20,000 for exceptional dresses with Lesage embroideries.

PUPPY LOVE: Kylie Minogue knows how to make an entrance. The pop star turned up at the Chanel couture show on Thursday with her adorable pooch, Sheeba — on a Chanel lead, no less. “I’m working on a new album and concentrating on getting back to health,” said a chirpy Minogue, sporting a new peroxide crop. Meanwhile, Sir Elton John revealed he’s preparing to release the album “Captain Fantastic and the Kid,” which he described as a follow-up to his best-selling “Captain Fantastic and the Brown Dirt Cowboy.” “It basically tells of my life between the 1970s to 2006, with several slight deviations and with a big bang in the middle,” he said, giving the Chanel show a big thumbs-up. “I just loved the workmanship, and the boots were great. Karl’s great,” John said. Anna Mouglalis, however, was in no mood to talk music. “Oh my goodness, don’t bring up the album. I’m so behind on it,” the actress fretted about her latest extracurricular project. But other stars at the show were plotting summer getaways. “I’m going to Mexico,” said Rinko Kikuchi, who stars in the much-hyped film “Babel” alongside Cate Blanchett and Brad Pitt. French favorite Audrey Tautou said she was heading seaside soon, too.