Fashion Scoops: Out with the Not-So-Old … Friendly Visit … Waiting Game …

OUT WITH THE NOT-SO-OLD: Karl Lagerfeld is cleaning house again — this time in Biarritz and Monaco — and serious furniture collectors are already buzzing. The designer has turned to Sotheby’s to sell 240 pieces of 20th-century items... 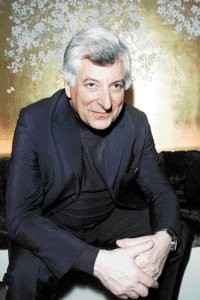 OUT WITH THE NOT-SO-OLD: Karl Lagerfeld is cleaning house again — this time in Biarritz and Monaco — and serious furniture collectors are already buzzing. The designer has turned to Sotheby’s to sell 240 pieces of 20th-century items in Paris on May 15. The auction, estimated to bring between $3 million and $4 million, boasts all the big names of French modernism including Jean-Michel Frank, Eileen Gray, Jacques-Emile Ruhlmann, Pierre Legrain and Alberto Giacometti. But Frank is definitely first among equals in the collection. Some 50 pieces — tables, lamps and even a chimney item by the designer — represent one of the biggest single collections to hit the market. Lagerfeld’s last clearinghouse, a series of sales with Christie’s in 2000 to empty his Paris mansion of its 18th-century contents, netted $28.5 million.

This story first appeared in the March 6, 2003 issue of WWD. Subscribe Today.

Meanwhile, the multitasking designer has mounted an exhibition about himself that bowed Wednesday at The Bon Marché department store. The eclectic display offers Lagerfeld’s take on everything from photography to philosophy to fashion via video monologues. There’s even a souvenir on offer: a CD featuring a selection of Lagerfeld’s favorite songs compiled by Michel Gaubert.

FRIENDLY VISIT: Patrizio Bertelli may have sold his 25.5 percent stake in Fendi to LVMH Moët Hennessy Louis Vuitton in 2001, but he certainly hasn’t lost interest in the Roman fashion and accessories house. Minutes before the Miu Miu show in Milan this week, the Prada chief executive paid a surprise visit to the Fendi showrooms, where the new Fendi Selleria line was bowing. Was he checking out the competition? “He came to say hello and that was very nice of him, but that’s all — he still has a great relationship with them,” said a Fendi spokeswoman, “them” being Carla Fendi and Silvia Venturini Fendi.

WAITING GAME: Rick Owens showed his signature collection in Paris for the first time on Wednesday, and Georges Wichner, the new president of Revillon, was spotted at the show. As reported, Revillon is expected to tap Owens to help rejuvenate the fur house, and help it expand into accessories. But perhaps Owens didn’t want to steal any thunder from his European debut. Word has it, the official announcement won’t happen until later in the Paris week.

THE BLOOM ROOM: Lesly Zamor, whose floral design shop Bloom Flowers has become a Chelsea fixture over the past decade, is closing the Bloom Ballroom event space next door at 48 West 21st Street, a victim of New York’s down market for any sort of hoopla. But he’s coming back with a new concept, partnering with restaurateur Lesly Bernard, to open a new Indian fusion restaurant in the space called Taj.

The Leslys — both are natives of Haiti — have been friends for 15 years, but never entered a business venture together before they came up with Taj, which opens on March 24. Bernard most recently designed Clementine and NYC, and was formerly partners with Keith McNally at Pravda, but was turned on by the Indian concept after Zamor began to explore its influences in his floral displays. Jonathan Lindenauer collaborated on the menu.

“We’re going to design the restaurant with accents of color and Indian design,” Bernard said. “It’s not going to be a kitschy idea of Indian cuisine.”