Few things are as anticipated in fashion circles on these muggy July days than the Council of Fashion Designers of America meeting next Monday. 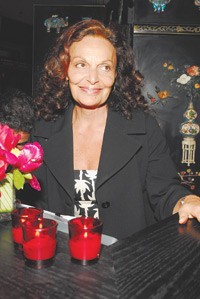 PRESIDENTIAL POLITICS: Few things are as anticipated in fashion circles on these muggy July days than the Council of Fashion Designers of America meeting next Monday, where the 26 board members are expected to elect the next president to replace Stan Herman, who departs in late October. Contenders Diane von Furstenberg and Joseph Abboud will step in front of the board members and will have 10 minutes to make their cases.

Rumors of intense lobbying have made the rounds, which both contenders downplayed. “I am not a politician, I have not done any loving,” von Furstenberg said on Wednesday. “I wrote a letter to the board and will speak to them for 10 minutes on Monday. Whomever they choose will be the right choice, and I will continue to be an active member of the board if Joseph wins. If they elect me, I will take it very seriously and it will be my full honor.”

Abboud, for his part, said he has been mentally preparing for Monday for a while. “I am going to try to focus on stating my case more than anything on Monday,” he said. “I want it to be from the heart. The lobbying part of this is not the part I enjoy,” he added. “I sent out a letter to my fellow board members and officially announced my candidacy, but there has been no dining and wining, and no expensive presents.”

The one to succeed would be joining an illustrious list of fashion designers who have held the position since 1963, including Norman Norell, Oscar de la Renta, Bill Blass, Mary McFadden, Perry Ellis and Carolyn Roehm. Von Furstenberg is sure to add much glamour and her determined will to the presidency, as well as her top-notch Rolodex, while Abboud, who is said to have made himself available to members in the past few months, is considered to have more time on his hands now that he is estranged from his company.

“We have two major candidates,” said Herman, who refused to take sides. “It took me 15 years to get someone interested, and now we have two major names who want the job. Both candidates have said they will accept the winner and continue to work for the Council’s benefits.”

Some have likened the race — and buzz about the lobbying techniques — to the 2000 presidential election, and, according to some board members, who spoke on the condition of anonymity, it’s a race between the two contenders with no clear front-runner yet. Will a recount be necessary?

PICTURE THIS: Most couturiers seek a little R&R after mounting their collections, but Karl Lagerfeld prefers a little B&W and color — photography, that is. Since his Chanel couture show last week, the snap-happy designer has lensed editorials for Interview, Numero and Purple magazines. And he still found time to shoot portraits of a gaggle of personalities, including Marianne Faithfull and Anna Mouglalis, ahead of a September event in Chanel’s Avenue Montaigne store in Paris. “I’m working class,” Lagerfeld quipped.

RETAIL ROYAL: Joan Burstein, founder and owner of Browns, the London designer boutique, was awarded an honorary Commander of the Most Excellent Order of the British Empire (CBE) on Tuesday at Buckingham Palace. Queen Elizabeth II herself bestowed the honor on Burstein, who opened the store in 1970, and brought names such as Giorgio Armani, Donna Karan and Comme des Garçons to the U.K. A keen talent scout, she first bought John Galliano‘s collection — when he was still a student. “I was terrified,” said Burstein, who wore a cream silk Zoran silk skirt suit and a brown silk Zoran jacket to collect her medal. “The palace is so overwhelming – it’s even more magnificent in reality.” Burstein told WWD that the Queen was knowledgeable about Burstein’s background, and congratulated her on her 36 years in the fashion industry. After the ceremony, Burstein repaired to lunch at Harry’s Bar with her family. “It was such a lovely day. Everyone should experience it!” Burstein joins fellow fashion maven Rose Marie Bravo, former Burberry chief executive, who received her CBE last month.

BUNGALOW BAR: Libations were the thing at the London launch of Amy Sacco‘s first book, “Cocktails,” out from Assouline, at the Sanderson Hotel on Monday night. “I’m Amy’s favorite drink,” boasted guest Salman Rushdie. “Well, that’s what she signed in my copy.” Others who came to bow at the altar of the Bungalow 8 owner included Kimberley Stewart, Stephen Jones, Camilla Al Fayed, Daniella Helayel, Daisy de Villeneuve, Angeline Cesar and Marianna Verkerk.

“This was very taxing research,” said Sacco, slurring her speech with mock inebriation. “It’s the history — of cocktails, of my clubs, of me. But without the gossip.”

HOTELIER HURLEY: Nicky Hilton isn’t the only bold-face name stepping into the boutique hotel business. Elizabeth Hurley isn’t putting her name on the door, but she’s the newest shareholder in Eleven Cadogan Gardens, better known as Number Eleven. Hurley has been known to frequent the hotel, which was built for Lord Chelsea a century ago. A butler greets guests at the doorway, period furniture and art adorn the 65 rooms, an historic elevator shuttles visitors and a fully equipped gym is set up for a more modern workout.