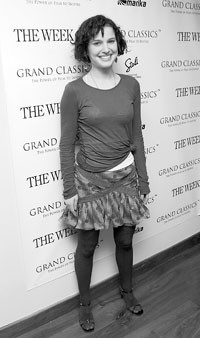 RAINY NIGHT: Even Natalie Portman is prone to fashion emergencies. “This whole day has been kind of a process, walking around in the rain,” Portman said before introducing the movie “Camille” at a Grand Classics screening at SoHo House Tuesday night. “My skirt ripped, so I bought a new one, and I have my shoes in my bag.” The new skirt was Marc Jacobs; the top remained James Perse. As for why she chose George Cukor’s 1936 movie, which is based on the Alexandre Dumas novel and stars Greta Garbo, she got some pointers from Mike Nichols, who directed her in his new film, “Closer.” “Every week he held a screening for us and he showed it as a double feature with ‘Pandora’s Box.’ He presented it as the greatest female performance of all time, and I have to say I agree.”

“I just got my copy of the book and it looks great,” quipped the film director, who, when asked if he was a Dunhill fan, retorted, ‘I don’t know. I have stopped smoking.”

SHORT SUITED: IMG Models has become the first agency to opt to settle a class action lawsuit brought by more than 10,000 current and former models who allege that New York’s biggest agencies bilked them out of millions of dollars through unfair commissions. A spokeswoman for IMG, which reps some of the biggest names in the business like Gisele Bündchen, Heidi Klum and Tyra Banks, confirmed on Wednesday that the class plaintiffs and the agency had agreed to settle both federal and state cases, but did not disclose the amount of the settlement.

The heads of several rival agencies were said to be infuriated by IMG’s settlement — believed to be upward of $5 million and partly covered by insurance — as the case is seeking damages of more than $200 million and, if successful, threatens the future of many businesses. Wilhelmina, Ford and Elite are among the 64 agencies included in the case, which is scheduled to commence on June 1.

WHAT A TEASE: As if burlesque hasn’t been in the spotlight enough of late, what with the celeb-laden Pussycat Dolls revue, dancing queen Dita Von Teese and Hollywood hot spots like 40 Deuce and Key Club going wild for naughty cabaret, “Tease,” a burlesque-style musical comedy about the inner workings of a gentleman’s club, is set to open a six-week run at the Century Club Theatre in Los Angeles on April 22. Costume designer Chantal Filson, who has dressed Carmen Electra, Pink and Kelly Osbourne, is on board, as are Cris Judd and Eddie Garcia, the choreographers responsible for the moves in Jennifer Lopez’s concerts and videos (Judd was also J.Lo husband number two). Considering Filson’s experience dressing bad girls, expect her costumes, made with starlet fave Eberjey Intimates, to be sensory delights in themselves. Opening night guests, including Paris Hilton, Erika Christensen, Juliette Lewis, Tommy Lee and Ashton Kutcher are already keyed up, and some, like Bill Maher and Jack Osbourne, have already asked for cameos in the show. Several actors also are said to have received scripts for the part of Rocco, the club manager. Is the Great White Way next?

UNDER WRAPS: The second Calvin Klein underwear store in North America, a 1,000-square-foot space, will open on the ground floor of the The Shops at Columbus Circle at the Time Warner Center at the end of June. A Warnaco spokeswoman confirmed a lease has been signed and said the store will have the same aesthetic and contain the same product mix as the store on Prince Street in SoHo, which opened in December. Warnaco Group owns the Calvin Klein trademarks for underwear and intimate apparel.

Blue Vibes, a multinational company that owns and operates the SoHo location as a franchise will have the same role at the new store. Jim Saunders, a broker with Newmark/New Spectrum involved in the deal, said rents at the Time Warner Center run between $150 to $400 a square foot, depending on location.

A source close to Warnaco said the company expects to open five stores before the end of the year and is in discussions with a number of mall and street properties, including one in South Florida. There are already about 15 stores in the Far East and more than 10 in the U.K., with more on the way. “We’re quietly developing a retail business that’s meaningful,” the source said.