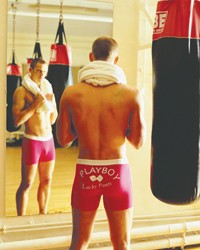 SARNE GIVES UP GHOST: After selling a controlling stake in her London fashion label Ghost last December, Tanya Sarne will be leaving the company she founded in 1984. Ghost, a label famous for its floaty viscose fabrics and fluid feminine silhouettes, is now owned by Kevin Stanford, the British retail entrepreneur, and the Icelandic investment group Arev Management. “I feel sure the new management will uphold the philosophy of Ghost, and wish everyone involved success for the future,” said Sarne, who added she’s leaving to pursue other interests. A spokesman for the company said the new owners plan to lower the collection’s price points and appeal to a broader customer base. The new management also plans to roll out Ghost stores across the U.K. over the next decade, to add to the company’s four existing stand-alone stores in London, Los Angeles and New York.

COMING UP ROSES: Sir Paul Smith has long been an authority on eccentric British style, and now he even has a variety of England’s signature flower, the rose, named after him. The designer was presented with the Sir Paul Smith rose at London’s Chelsea Flower Show earlier this week — as a surprise birthday gift from his wife, Pauline. The deep pink climbing rose was developed over three years by rose grower Amanda Beale, and it flowers from spring to winter. Smith said the warm color reflects the fact that he’s always “happy” and “optimistic.” Nothing about smelling so sweet …

JET SET: Hugh Hefner isn’t letting his age get in the way of his status as an international playboy. The 80-year-old mogul swung by Harvey Nichols last week during the British leg of his party-packed European tour to celebrate the launch of his Playboy men’s underwear line at the store. Hefner held court with his three girlfriends, Holly Madison, Bridget Marquardt and Kendra Wilkinson, while he signed copies of his latest book, “Playboy 50 Years: The Photographs.” “It’s the girls’ first visit to London,” said Hefner, before turning to more jovial matters. “I do my best to keep up with them — Viagra is the best legal recreational drug out there.”

Hefner looked on while fans, who had waited in line outside the store for a glimpse of the magnate, scoped out the latest retro-inspired fall ’06 Playboy men’s wear collection, which includes velour robes, vintage-print T-shirts with images of former Playboy covers, Las Vegas-themed briefs and jersey bottoms complete with embroidered Playboy logos (in addition to the staple Playboy men’s basic boxers).

“The brand is stronger than ever on a global scale,” said Hefner, though he shrugged when asked about his own taste in underwear. “I like him sans underwear!” interjected girlfriend Madison.