SCENTS AND SENSIBILITY: Talk about an approachable royal. Asked at the Viktor & Rolf show and fragrance launch Wednesday if she had tested the designers’ forthcoming perfume, Flowerbomb, Mabel Wisse Smit, crown princess of the... 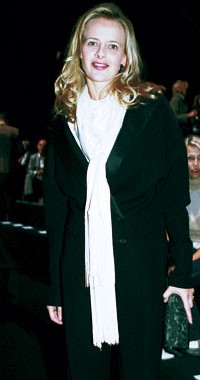 SCENTS AND SENSIBILITY: Talk about an approachable royal. Asked at the Viktor & Rolf show and fragrance launch Wednesday if she had tested the designers’ forthcoming perfume, Flowerbomb, Mabel Wisse Smit, crown princess of the Netherlands, pulled open the collar of her silk blouse and offered her neck. “I love it,” she declared. Smit, who famously chose a bow-festooned Viktor & Rolf dress for her royal nuptials last April, said she’s a big fan of their clothes in everyday life, too, “because they’re traditional, but always with a twist.” What’s more, Smit, an active human rights campaigner, said they suit her working life. “They’re incredibly comfortable,” she said, swinging her arms to demonstrate the roominess of her tuxedo jacket.

AHOY SAILOR: Sofia Coppola took time out from casting her new movie on the life of Marie Antoinette to take in Helmut Lang’s show on Wednesday. “We have been very busy, but being in Paris makes it much nicer,” she said. Before the show, Coppola said she would be on the lookout for a particular pair of sailor pants originally designed for Bill Murray, the star of her Oscar-winning “Lost in Translation.” “I heard that Helmut Lang designed a tuxedo for [Murray] with sailor-style pants and a similar pair are in the show today,” she explained.

A BONDING PROCESS: “They’re the perfect Bond girls,” declared Jason Basmajain, creative director of ST Dupont, as the Paris luxury firm launched a line of high-end pens, lighters and cufflinks under license with the 007 franchise at a party at the Hotel de la Monnaie, attended by the likes of Milla Jovovich. Basmajain, who outfitted his own male models in ST Dupont’s sleek tuxedos, was referring to the dozen or so girls who were swirling martinis in slinky gowns by Azzaro. “We like the idea that Azzaro is dangerous and sexy — like Bond,” said Vanessa Seward, Azzaro’s designer.

COSTUME DEPARTMENT: Chanel is sticking with its request that photographers wear black suits and white shirts to match the décor of its show on Friday. But the house, well aware of strike talk rumbling through the photo pits since the Milan shows, assured Wednesday it would accommodate all comers. Word has it that Karl Lagerfeld may arrange to have a few Dior Homme suits on hand for dashing shutterbugs to people his set.

NIGHT AND DAY: Fashion and film joined forces for a cocktail at the Emporio Armani boutique Tuesday night in Paris. After a screening of Irwin Winkler’s “De-Lovely” on the Champs-Elysées, stars Ashley Judd and Kevin Kline saluted Giorgio Armani, who styled the costumes for the movie. “I like all music and film which marks a time. It’s similar to memorable [fashion] collections,” Armani said. Kline said he was still in awe of the designer’s hands-on approach. “[Armani] stayed for five hours with chalk in his hands and pins in his mouth fixing my jacket,” he said. So, does Cole Porter’s style match his own? “He was extremely cutting edge for his time, much like myself…n’est ce pas?” Kline asked with a wry grin. Meanwhile, over on the Right Bank, Eva Herzigova feted her second lingerie collection. “I am very much inspired by the Thirties,” pronounced Herzigova, before kicking up her heels with fellow model Karolina Kurkova on the dance floor.

FAMILY FLARE: French painter Balthus certainly passed on his creativity to his lineage. Harumi Klossowska, the artist’s daughter, designed the jewelry for the Emanuel Ungaro show on Wednesday. “Much of my inspiration comes from nature. I like combining natural materials such as silk and pearls,” she said. Klossowska sat next to her sister-in-law, Loulou de la Falaise. Down the row, French actress Lou Doillon chatted with Salman Rushdie‘s new wife, Padma Lakshmi. “I’m here to make sure [Giambattista Valli] has been working hard enough,” she noted.