SCREEN SAVER: It was celebrity gridlock at the Christian Dior show that kicked off couture week on Tuesday, with Oprah Winfrey, “Trojan” beauty Diane Kruger, artist Tracey Emin and Elizabeth Hurley among... 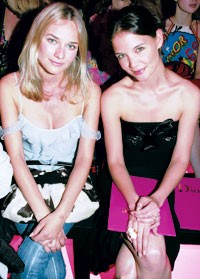 SCREEN SAVER: It was celebrity gridlock at the Christian Dior show that kicked off couture week on Tuesday, with Oprah Winfrey, “Trojan” beauty Diane Kruger, artist Tracey Emin and Elizabeth Hurley among the assorted glitterati. “I wanted a moment of magic,” said French actress Juliette Binoche, who just wrapped up a film in San Francisco with Richard Gere called “Bee Season.” Actress Katie Holmes was making her couture debut, traveling from London where she has been working on her next movie, “Batman Begins.” “I’m making a very quick round-trip just for Dior,” she confessed. Meanwhile, rapper-turned-designer Eve proved her “Fetish” for fashion is in good form. “This is my second Dior couture show and it’s as exciting as always,” she purred.

TOUCH AND GO: Look who else is playing guest editor: Margherita Missoni. The 20-year-old daughter of Angela Missoni is hitting couture week for an upcoming feature in the American edition of Elle. Her job description: “I’m going to all the shows, picking the clothes I think are the best and then they shoot it on me.” But she’s not just trusting her eyes. “I hope I can touch them after because it’s difficult to pick a dress without feeling the fabric,” she said. Meanwhile, The New York Times Magazine has Korean-born, New York-based artist Nikki S. Lee doing an upcoming fashion feature. Lee, famous for embedding herself in a number of social tribes — skateboarders, punks, lesbians, senior citizens — is trying on couture for size.

SHOE TIME: When it comes to imagining new ad campaigns for Charles Jourdan, creative director Patrick Cox certainly has big shoes to fill. At a party Monday night to fete the Guy Bourdin exhibit at Paris’ Jeu de Paume museum, Cox was admiring a Bourdin image for Jourdan of a stilettoed model stretched languidly on a couch. “The standards are set,” Cox remarked. “It’s about imagining what Bourdin would do next…and I think I have an idea,” he added, pulling Elizabeth Hurley to his side to point out her Jourdan shoes. “Oh, editor, I like the sound of that,” cooed Hurley, who’s in town to act as Citizen K magazine’s crack reporter for couture week. Meanwhile, across town at the Hotel Salomon de Rothschild, Ozwald Boateng feted his debut men’s collection for Givenchy presented earlier in the day. Val Kilmer, Emmanuelle Seigner and Karen Mulder were among those offering congratulations. Yet Boateng’s greatest fan and wife, Gyunel Boateng, set high standards for Givenchy’s next couturier, who has yet to be named. “It has to be good enough to go with my husband’s collection,” she boasted.

TRUMP CARD: Melania Knauss, Donald Trump’s fiancée, is attending the couture shows this week with André Leon Talley at her side. American Vogue is doing a story on her choosing her trousseau. But her first appearance, at Tuesday’s Dior show, got some tongues wagging when Donald’s ex, Ivana, made her way to her seat on the other side of the runway.

FOR ART’S SAKE: The Yves Saint Laurent and Pierre Bergé Foundation, which opened earlier this year with an exhibit devoted to painters that inspired YSL fashions, will continue in an artsy vein. Saint Laurent has tapped American Robert Wilson, known for his minimalist stage productions, to mount a show around the Fables of Jean de la Fontaine. It is slated open in November.

PRICE IS RIGHT: Georgina Brandolini may come from a couture background, having worked at Valentino and Balmain, but she’s quickly learning the realities of launching a fledgling label. “I was too expensive,” she confessed. To wit: The spring collection of evening sweaters she’s showing retailers this week during couture includes styles priced at 100 euros, or $123, at wholesale. Brandolini, who already ships to more than a dozen American retailers, said she ultimately may launch as a secondary label. Meanwhile, she’s adding bandanas, belts and bags.

FAMILY TIES: The Emanuel Ungaro fashion house is getting light on Ungaro family members. Following Ungaro’s announcement last May that he’s no longer doing couture, his wife Laura, longtime communications director, has left the company. Ungaro chief executive Paolo Di Spirt has temporarily taken over her responsibilities until a successor is named. Ungaro said she would continue to consult for the house on a project basis.

YELLOW FEVER: On Tuesday, Style.com initiated an online auction featuring a slate of exclusive yellow and yellow-accented luxury goods. Proceeds of the auction, put on in conjunction with the Council of Fashion Designers of America and Nike Inc., will go to the Lance Armstrong Foundation, which helps young people with cancer. Style.com is a joint venture between Vogue and W and, like WWD, is part of Advance Publications, Inc.

The auction runs through July 16 and includes a dress and matching clutch from Oscar de la Renta’s spring collection, a made-to-measure dress by Narciso Rodriguez and thigh-high yellow leather boots from Manolo Blahnik.

In addition to being the color of the Tour de France champion’s jersey, yellow is a symbol of hope and perseverance for Armstrong, a cancer survivor who’s currently pedaling away aiming for a record sixth consecutive Tour victory. Nike donated $1 million to the foundation and is looking to raise a total of $6 million through the auction and the sale of wristbands engraved with Armstrong’s Live Strong mantra.