SHARP SHOOTERS: Photographers at fashion shows are not generally a dressed-up bunch, but that will soon change — at least chez Chanel. Karl Lagerfeld is requesting all photographers and camera crews covering the Oct. 8 Chanel show... 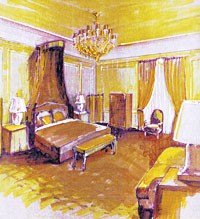 SHARP SHOOTERS: Photographers at fashion shows are not generally a dressed-up bunch, but that will soon change — at least chez Chanel. Karl Lagerfeld is requesting all photographers and camera crews covering the Oct. 8 Chanel show to arrive dressed in black suits and white shirts to match the decor at the Carrousel du Louvre. Chanel declined to say more, but is making the unusual request as media outlets apply for accreditation.

MODERN SAINT: The St. Regis is getting a modern facelift. Renowned interior designers Stephen Sills and James Huniford, known for their ability to blend classic and contemporary styles, will begin renovations on the landmark hotel’s 19th-century Belle Epoque interiors in early 2005. The duo plans to restore the 222 rooms, 93 suites, public spaces and the lobby using fabrics in Mediterranean colors to revitalize the hotel’s glamorous aura.

DAIRY QUEEN: Kelis may know a thing or two about milk shakes, but the hip-hop diva is also quite the wine connoisseur. “It’s something that I started getting into last year on a trip to the wine region in Italy,” the singer explained last week in Paris at the Chanel boutique, which hosted a tasting for the annual “vendanges” fete on chic Avenue Montaigne. “But don’t get me wrong — I love French [wine] too.” And French partygoers loved her special performance, raising the roof as Kelis belted out her fetish song, “Milkshake.”

PARTY TWITCH: Noses a-ready? The publicity machine behind “Bewitched,” Sony’s film adaptation of the kitschy Sixties television series due out next July, is riding high on a broomstick. Just one week into production, the film starring Nicole Kidman, Will Ferrell and Shirley MacLaine has signed on with Jem Sportswear, known for its vintage licensed creations with Peanuts, Walt Disney Collection and Coca-Cola, for an apparel collection of T-shirts and possibly cashmere sweaters debuting next spring. Trendy boutique Kitson on Robertson Boulevard in Los Angeles, a haunt for celebs such as Paris Hilton and Halle Berry, gets first crack at the line with a three-month exclusive. It also plans to do it up with a launch party in April with custom-designed windows.

TIES THAT BIND: Fashion editors’ sights may have been focused on the New York runways last week, but Tara Reid had other ideas farther uptown. Reid helped four couples tie the knot at wedding planner Colin Cowie’s 57th Street store, compliments of J.C. Penney. Cowie has developed a signature home collection for the chain, which used the occasion to launch its wedding registry. Reid appears in a wedding dress in Penney’s new ads with Cowie.

She stood witness as each couple exchanged their vows in the store window, causing many Midtown passersby to pause. The newlyweds were selected based on personal essays.

Erin Albrecht, a fashion designer and underwriter who lives in Brooklyn with her new husband, Stephen Neave, a filmmaker, said she wasn’t put off by the commercial spin on her big day. “We never wanted a traditional, big wedding. We thought this sounded perfect with our lifestyles.”

Albrecht applied for the contest, after reading about the essay contest. “I just like not having to plan things,” she explained.

Her father, Gary Albrecht, liked not having to foot the bill, but said what he really liked was that the celebration suited their personalities. Reid, a regular on the party circuit, didn’t stick around long for the festivities.

BACK IN THE SADDLE: Ralph Pucci of Ralph Pucci International manufactures mannequins, but his 15-year-old daughter, Nicole, is no stiff. Fresh from winning the “Grand Champion” trophy at the Hamptons Classic [Children’s Hunter division] Nicole will compete in the Palm Beach Classic in January. But this time she’ll graduate to the Junior’s Hunter division, jumping three feet, six inches, compared with only three feet previously, and competing against older teens. “I definitely get nervous when she jumps,” said her father. “But in order to participate at this sport, the kids must be incredibly focused and very serious, and that carries over to school and everyday life. Horseback riding is a real learning experience.”