Alber Elbaz's makeover of Lanvin, which recently extended into men's wear, is about to hit the retail floor, too. 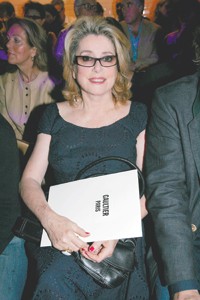 SHOP TALK: Alber Elbaz‘s makeover of Lanvin, which recently extended into men’s wear, is about to hit the retail floor, too. The house plans to shutter its Paris flagship on the Rue Faubourg Saint-Honoré at the end of the year for renovations, reopening with a new look for spring 2007. Elbaz will test elements of the new concept at the Lanvin location in Marbella starting at the end of the month.

PRACTICAL MAGIC: “Valentino has five pugs and we have two so I feel we have some kind of a connection,” said Billy Joel‘s wife, Katie, who popped up front row at Valentino last week to check out her first couture show. She said she’s in town to accompany her hubby on his European tour. And while most couture clients have been busy perusing wallet-busting designer boutiques during their downtime, the ever-practical Martha Stewart has been holed up in the très unglamorous basement of department store BHV at the Hotel de Ville. “I spent hours there, they have absolutely everything,” she enthused about the Parisian house and hardware hub. Stewart noted it was her first time at couture since her modeling days.

INSPIRED SPREE: One can only watch so many bedazzled couture creations tromp down the runway before getting the itch to go out and shop. Liv Tyler, who has been spotted at Dior and the Chrome Hearts party, made a beeline for the Roger Vivier store on Thursday (with ubiquitous stylist Rachel Zoe right behind). The raven-haired actress picked out a signature black crocodile buckle clutch and a pair of a strappy black satin sandals (the same pair in champagne satin are on hold). After purchasing the goodies, Tyler slipped into one of the back offices to see some of the pictures hanging on the wall of Jackie O., Brigitte Bardot and Catherine Deneuve, all wearing the iconic buckle pump.

UNDER THE BIG TOP: Fashion can be a real circus, and Jean Paul Gaultier is hip to that. Word has it the couturier is mulling a circus theme for a blowout 30th anniversary party this October, and he’s asking French fashion editors to get in on the act. Some have been quietly approached to participate in magic tricks and the like, with Gaultier planning training sessions. No word yet if anyone has been asked to be shot out of a cannon. Meanwhile, at his couture show Friday, Greek socialite Eugenie Niarchos revealed plans to immortalize a piece of couture in chrome. “I’m choosing a certain couture piece for an art and fashion exhibit that I am working on that will be exhibited at TSUM gallery in September or October in Moscow,” she explained. Niarchos, who sat with gal pal and fellow socialite Olympia Scarry, said she was spending most of her time in London where she was pursuing a marketing and fashion degree. Across the runway, Catherine Deneuve said she had just finished filming “The Family Hero,” with Emmanuelle Béart and Lorenzo Balducci.

BULL’S-EYE: The Rodarte sisters, Laura and Kate Mulleavy, might have been too busy manning their guest corner at Colette to go to any couture shows, but they managed to meet some fashion royalty anyway, including Karl Lagerfeld, who snapped up a black, drop-waist Rodarte dress for Lady Amanda Harlech. “It was the highlight of our week, as well as spotting Catherine Deneuve in the street,” enthused Laura. The girls also took over the store’s windows.

ON THE ROCKS: The jewelers of Place Vendôme treated the couture crowd to a sparkling round of parties last Thursday night. And there were even jewels where you least expected. “Look at the gems,” said model-turned-photographer Astrid Munoz, twirling her ankle to show off her ruby slippers at Giuseppe Zanotti‘s bash at the Ritz Club later that night. Munoz is covering couture for French Elle, and Zanotti was celebrating his new corner at the Printemps department store. “Every girl needs a glamorous pair of shoes,” cooed Eva Herzigova. “It must be a girl thing,” Benicio Del Toro mused about the apparent obsession with footwear. Del Toro said he was in Paris to finalize details of a new film. Meanwhile, Andrea Casiraghi and his girlfriend, heiress Tatiana Santo Domingo, kicked up their fancy feet until dawn.

JUNGLE FEVER: “It’s an English garden party,” said Kenzo designer Antonio Marras as he welcomed guests, including Amira Casar, Marion Cotillard, Sophie Marceau and his boss, LVMH Moët Hennessy Louis Vuitton chief Bernard Arnault, to the unveiling of his renovated Kenzo boutique on Paris’ Place des Victoires last week. Marras shut down the square to transform it into an imaginary garden, replete with a lawn and a forest of trees. Models in his clothes mingled with the crowd or posed on wrought-iron beds. “It’s like a fairy tale,” said Marceau, who revealed she would start working on a thriller this August. “I wrote it, I’ll direct it, and I’ll act in it,” said the French beauty. “I love to have control of everything.”