Aerin Lauder took in the Balenciaga show on Tuesday morning, saying she is a big fan of designer Nicolas Ghesquiere. 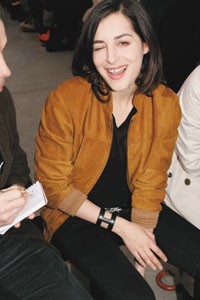 SMELLS LIKE TEAM SPIRIT: Aerin Lauder took in the Balenciaga show on Tuesday morning, saying she is a big fan of designer Nicolas Ghesquière. “I love his eveningwear for this season, and the pants are always amazing. He’s so talented,” she gushed. But Lauder’s presence was intriguing, given that the Balenciaga perfume license with Jacques Bogart group expires later this year — and Ghesquière has made it clear he does not feel compelled to reassign it to Yves Saint Laurent Beauté which is, like Balenciaga, a Gucci Group company. Lauder insisted no deals were in the works, and she was also in Paris to see how Sephora stores are rolling out Tom Ford for Estée Lauder cosmetics. But when asked if she would love to work on a project with Ghesquière, she replied, “Of course.” Actresses Maggie Cheung, Charlotte Gainsbourg, Amira Casar and Isabelle Huppert also took in the show. Classical pianist Helene Grimaud arrived from a concert in Brussels to watch her first fashion show. “I met Nicolas a few years ago and like him a lot,” she said, explaining the two had talked about a concert wardrobe for the virtuoso. Across the runway, actress Casar explained she recently broke her foot — but was still in towering heels — on the set of director Tony Gatlif‘s upcoming feature “Transylvania,” also starring Asia Argento. “It’s like a rock ‘n’ roll road movie,” she said.

SHINING STAR: Arriving in Paris from Torino, where she performed at the closing ceremony of the Olympic games, Avril Lavigne is taking on the world. “Over a quarter of the planet was watching,” said the pint-size pop star, who popped by the Swarovski Crystal Silver party on Monday night. Lavigne, who has lately cottoned on to Chanel, is making a two-day stop in Paris for a photo shoot with Citizen K magazine.

BLUE NOTE: Notify jeans have a knack for getting noticed, and the guests attending the company’s party Monday night weren’t exactly the shrinking violet type either. “I’m trying to convince my friends to stay a little longer,” said a denim-clad Linda Evangelista, turning to chat with Jessica Alba. “They look terrific on [Linda], but I look terrible in jeans,” demurred burlesque fashion fixture Dita Von Teese. Fashion belles Audrey Marnay and Astrid Munoz also paid homage to Marc Newson, the denim deity behind the Paris-based brand Maurice Ohayon, at the VIP club. Newson said he was busy designing a hotel in France and coming out with a new watch collection with a Swiss manufacturer.

UNDERCOVER ANGEL: Actress Dolores Chaplin showed up in a vintage black lace dress Monday night to help Tomas Maier celebrate his swanky new Bottega Veneta boutique on Avenue Montaigne. But she’s gearing up to wear a lot less in her next film, “The Counterfeiter,” which starts filming in Austria soon. “I play a French call girl,” she explained, starting to laugh. “I know I will have a lot of fantastic underwear.” Camille Natta, Zoé Félix and Linh Dan Pham were among other young actresses who joined Gucci Group brass for the swanky fete.

BIRTHDAY GIRL: Model Liya Kebede won’t divulge how old she will be turning today. “I’m ageless,” said Kebede coyly, adding she isn’t shopping around for any particular birthday present to celebrate the event. However, she’ll mark the occasion tonight with friends at the new restaurant and lounge bar Black Calvados. “I am having a party with good music and dancing,” she said.

ON THE VERGE: After the mayhem that erupted at his couture show in January when Madonna arrived, Jean Paul Gaultier took a break from celebrities at his show on Tuesday. Still, actress Rossy de Palma, a Pedro Almodóvar favorite, was spotted among guests in the front row. “It was spectacular — terrifying,” she gushed of the Gothic extravaganza. De Palma explained she was in Paris for a day to seal details for an operetta called the “Chanteur de Mexico,” which will open at the Théâtre du Châtelet in September.

TRIGGER HAPPY: Move over Mario — there is a new breed of fearless fashion photographers who are snapping photos from their front-row seats. Inès de la Fressange, Emma de Caunes, Julie Gayet, Isabelle Adjani and Marisa Berenson have their work on display at the Paris Bon Marché beginning today until they are auctioned for charity. Model Astrid Munoz hasn’t shied away from the profession, either. “I love being on the other side of the lens,” said Munoz, who will be heading to China to shoot a series of self-portraits for Condé Nast Traveler. Meanwhile, Dita Von Teese, Catherine Deneuve and the Dsquared twins Dan and Dean Caten were among those who turned up Monday night at Colette to inspect a selection of snaps by Suzy Menkes as part of the boutique’s Brittania promotion. “Little do they know I kept the best photos for me,” Menkes quipped.

THE SMALL STUFF: Louis Vuitton, which last season opened a mega store on the Champs Elysées, just unveiled a “mini me” collection ahead of its fashion show on Sunday. While stressing it is not a full-fledged children’s wear launch, Vuitton will certainly tempt indulgent parents come June. That’s when miniature replicas of iconic styles for women and men will turn up in nine Vuitton stores, merchandised next to adult styles in eye-catching trunk fixtures. About one-third the price of adult styles, the itty-bitty Vuitton items are mostly casual basics — with a luxury twist. Key styles for mom and daughter include Macintosh raincoats, cropped leather blousons with monogram-embossed mink collars, cashmere sweatshirts and jeans, the small version with adjustable waistbands. Fathers and sons can step out in down jackets, striped T-shirts and toggle-front coats. The looks for kids are not exactly alike, and are reproportioned for young ones ages 2 to 8. In October, Vuitton introduced some children’s sneakers in tandem with the Paris flagship — with spectacular results. These will continue, as well, more widely distributed in some 150 Vuitton stores. The children’s clothing can be found in Vuitton flagships in New York, Los Angeles, Hawaii, Paris, London, Tokyo, Okinawa, Hong Kong and Taiwan.

KICK OFF: It seems that Stefano Gabbana and Domenico Dolce are working overtime to prepare the off-field uniforms for Italy’s national soccer team. The players will debut their chic new looks at the World Cup tournament that will kick off in June in Germany. A spokesman confirmed the project, but was mum about details. The design duo already dresses players from the Milan A.C team.

STONE AGE: Flintstones, meet Lucien Pellat-Finet. The French sweater wiz is collaborating with Warner Bros. to bring such characters as Pebbles, Bam Bam and Dino to the world of luxury cashmere this fall-winter. Pellat-Finet is in a charitable mood, too. He also collaborated with Elton John for a scarf with a keyboard motif; proceeds will go to John’s AIDS foundation. The scarf retails for 80 euros, or about $95.

LATIN FEVER: To help him accentuate the passion of dance, flamenco specialist Joaquín Cortés called on Jean Paul Gaultier to create costumes for his new show, “Mi Soledad,” which will be previewed tonight at Gaultier headquarters. “They must express emotions, feelings and passion,” said Cortés. And who better to capture the show’s Latin flare than France’s enfant terrible? “Gaultier expressed perfectly the spirit of the show: gypsies coming from Eastern Europe. I love the colors, and their movement,” Cortés said of his costumes, as well as those designed for his 17 musicians. “It’s very gypsy,” Gaultier said of his designs, including shirts teamed with metallic chain-accented jabots. Cortés will present the “Mi Soledad show,” which means “My Solitude” in English, to an audience of journalists and fashion’s finest at Gaultier’s studio here before heading to the Le Grand Rex on Thursday for a public performance. While the dancer is likely to be the toast of the fashion set, he’s planning to work hard on making the theme of his show believable. “Sometimes you are surrounded by a lot of people, but you feel alone,” he said. “I wanted to express this feeling.”