SO SORRY: Marc Jacobs’ monumentally late show on Monday may have angered a few, but leave it to Jacobs to come up with a humorous way to apologize. By Wednesday, a notice had gone up on marcjacobs.com stating,... 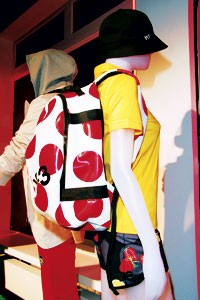 SO SORRY: Marc Jacobs’ monumentally late show on Monday may have angered a few, but leave it to Jacobs to come up with a humorous way to apologize. By Wednesday, a notice had gone up on marcjacobs.com stating, “The Marc Jacobs spring-summer 2006 collection show will be held Sept. 12th at 9:00 p.m. Please be advised the show is running approximately 1-1/2 hours late. Please check here for monthly updates.” What does it all mean? Robert Duffy, president of Marc Jacobs International, said he and Jacobs received so many complaints that they contemplated a formal apology. “We felt bad and are sorry,” he said. “I thought, let’s lighten up a little bit. Everybody was saying, ‘Why didn’t you tell us?’ So we said, ‘Let’s let them know now that we may be late next season.’ It wasn’t being disrespectful or arrogant. We’re sorry, lighten up and let’s move on.”

MUSEUM QUALITY: It’s a good thing Nicolas Ghesquière has his staff spiffing up and cataloguing that vast Balenciaga archive. Word has it, the Museum of Fashion and Textiles at the Louvre has approached the house about a major Balenciaga exhibition, possibly as early as next year. Meanwhile, men’s wear will be getting the museum treatment there first. In October, “The Dressed Man” is slated to bow, spotlighting the greatest moments in male style from the 17th century to today.

BOX-OFFICE BUZZ: Prada will make a silver-screen debut this weekend, unveiling the new commercial for its signature women’s fragrance, sources say. Word has it, Ridley Scott and his daughter, Jordan, shot the spot, slated to be screened at the Berlin Film Festival on Sunday.

ROC ON: Partygoers were treated to writhing dancers decked out in Patricia Field for the House of Rocawear Collection as they gyrated to hip-hop tracks at Ono at the Hotel Gansevoort Wednesday night to celebrate the launch of the collection.

Camera phones popped out once Damon Dash and his posse — including Nicole Wray, Cam’ron and Rachel Roy — arrived. Roy said she hadn’t attended any fashion shows this week, but that she was interested in checking out one in particular. “I am curious to see how Jennifer Lopez revamps her collection,” said Roy. Patricia Field hid from the frenzy in one of the heated outdoor cabanas. “This is just the beginning,” she said of her two-season collaboration with Dash. “If it works out, let’s keep going. It’s fun!” A few cabanas down, Michael Imperioli of “The Sopranos” took a few minutes to talk about his upcoming foray into the fashion biz.

“I’m doing a men’s wear collection with two other members of ‘The Sopranos’ cast, Steve Schirripa and Vince Curatola,” he said. Imperioli said the collection won’t be “Sopranos”-related, but will represent the quintessential New York man. “It’ll be a blend of different elements. It will be clothes that we like to wear, like woven shirts and denim. I’ve always been interested in fashion. It’s in the Italian blood.”

CAVACO’S BAR: This April, the fashion crowd will have a new place to frequent. Cayli Cavaco, daughter of fashion legends Kezia Keeble and Allure creative director Paul Cavaco, is opening a bar and lounge on the corner of Washington and Charles Streets, which she and her business partners, Michael Braner and Alex Venet, plan to call The Way Inn. The bar and lounge will feature a game room with pool and Foosball tables and a Miss Pac-Man machine. The space was a trash truck garage before it turned into restaurants Waterloo and then Midway. The expected opening date is April 20, which also happens to be her birthday. “We really just want it to be someplace where my friends can hang out and feel at home,” Cavaco said.

Cavaco was once a contributing editor at Teen Vogue, where she was in charge of a do-it-yourself column — which triggered her interest in such lifestyle projects. “That was the beginning of my Martha Stewart moment,” she said. “I feel like the Rock and Roll Martha of 2005 would have a bar.”

SNEAKERHEADS, GET READY: P. Diddy, Missy Elliott, Damon Dash and the Red Hot Chili Peppers are among the artists and celebrities who designed special edition Adidas sneakers as part of a 35th anniversary celebration for the company’s classic Superstar style. The iconic sneaker, introduced in 1970, began as a white leather shell-toe shoe with three black stripes and was initially intended for basketball. The style has evolved and been co-opted by everyone from skateboarders and hip-hoppers to fashionistas, and has legions of fans worldwide. The Superstar will be feted at a party on Saturday at the Adidas Original Shop in SoHo, where all 35 limited-edition models of the sneaker will be on display for the first time in the U.S., some of which will be available for sale.

Meanwhile, Adidas feted its new Y-3 collection with Yohji Yamamoto at a soiree Wednesday night at the Yamamoto store in SoHo. Among those checking out the new wares were gym owner David Barton, Olympic gold medal figure skater Oksana Baiul and Tara Dowdell, who is on this season’s series of “The Apprentice.” “I am not really supposed to be out talking to the press, but I love fashion and fashion week,” gushed Dowdell, who was clad in a turquoise top and black pants, all from BCBG.

But Greenfield-Sanders admitted that, “Some people asked when I would be doing the nude shot of them.” No names, please.

MELLO MOMENT: Although she was hobbling on a cane because of a knee problem, Dawn Mello made it to several fashion shows this week, including Carolina Herrera, Oscar de la Renta and Peter Som. “I think he’s extremely talented,” said Mello, sitting in the front row of the Som show. “He has a very bright future.” Asked about the future of another designer with whom she worked quite closely at Gucci — Tom Ford — Mello replied, “We’re all waiting to hear.” She said she heard the rumors about his launching a fragrance under his own name and thinks it’s a great idea. “He has a lot of star power, and everyone would rush to buy it. It will be a sexy fragrance.”

VERY VERA: Vera Wang may be making serious strides with her ready-to-wear, but she will always attract brides. Her runway show Thursday drew a bevy of socialites — Marina Rust, Jackie Astier, Helen Schifter, Jamee Gregory, Judith Giuliani, and Fernanda Niven — as well as recently wed Melania Trump and Katie Holmes, who is engaged to marry Chris Klein. The actress admitted she’d be keeping an eye out for wedding dress ideas. “I’ll check it out,” she said coyly. Cynthia Nixon was also seated in the front row and was approached by a fan after the show who wanted her to sign a “Sex and the City” video. Did he keep that on him at all times, just in case? “No,” he said, “I knew she would be here.”

Meanwhile, Oksana Baiul said she was there because she just got engaged. “Vera said if I ever need a dress, she would design it for me,” said Baiul, who said she was friendly with Wang. “I’m her number one fan. We never had a chance to work together. She has an amazing sense of style. It’s very clean and very sexy.” So when’s the wedding? “Very soon,” was all she would reveal.

FILM FANTASIES: Hear director Robert Altman talk about getting his 1977 film “Three Women” off the ground and it seems rather easy. “I went to sleep and I had this idea for a movie and the title was ‘Three Women’,” the director explained before a screening Tuesday night at SoHo House. “I woke up and said that’s a good title and I took the pad next to my bed and I wrote it down and went back to sleep. Then I dreamed the cast: Sissy Spacek and Shelley Duvall. And I got up and wrote that down. And then thought, well, I’ll shoot this in the desert. I knew the title and I had two of the three women. But I had no story. But I had this idea…and I said, well, I’m going to option the story. I went to [Twentieth Century] Fox on my way to the airport and sold them my idea. I said, ‘Listen, I’ve got this terrific movie and it’s called ‘Three Women’ and we’re going to shoot it in Palm Springs and blah blah and it’s with Sissy and Shelley and it’s about an identity theft.’ And I walked out there and got in the car to go to the airport and I had a deal.”

That rather flippant course of events ended up becoming the movie that propelled Julianne Moore, who hosted the screening sponsored by Hugo Boss and The Week, into acting. “For the first time in my life, honestly, I swear to you, I saw a movie and I felt something,” she said. “I felt like there was a person behind it. There was an idea behind it there was somebody there telling a story. And I said, ‘Ah that’s what I want to do. I want to work with that guy’.”

Moore and Altman were joined by fashion-minded folk including designer Matthew Williamson, as well as Nadja Swarvoski, Padma Laxmi, and Irina Panteva, who were finding refuge from the mania uptown at the Bryant Park tents.