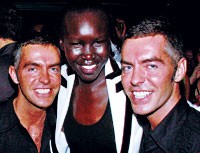 SOPHIA’S CHOICE: Sophia Kokosalaki had some intriguing characters in the front row of her Paris show Tuesday night: Givenchy president Marco Gobbetti and LVMH Moët Hennessy Louis Vuitton talent scout Concetta Lanciaux. Asked if they were considering the London-based designer to fill a slot vacant since Julien Macdonald exited in April, the pair demurred, waving off the question with a laugh. “I don’t like naming names,” Gobbetti said. He only promised to make an announcement “by the end of the year.” It is understood that Givenchy is still evaluating several potential candidates, including Isaac Mizrahi, Zac Posen and Roland Mouret.

CHIC CRITIQUE: Isabelle Adjani is the latest film star to play fashion editor for a day. At Dior Tuesday afternoon, the actress said she’d review John Galliano’s collection in an upcoming edition of Citizen K magazine. And what’s her idea of a good show? “It has to be fun and beautiful,” said Adjani on her way to her front-row seat in the sweltering venue. “And I’d like the temperature to be cooler than this.” Meanwhile, actress-designer Milla Jovovich said she was hoping to pick up an idea or two for her signature line. “You never know what to expect with Galliano, that’s the best part of it all,” she said, adding that she’s in Paris to promote her latest film, “Resident Evil: Apocalypse.”

AMERICAN IMPORT: Sofia Coppola has settled into an apartment on Paris’ Boulevard St. Germain, just above the Café Flore, sources say. The “Lost in Translation” director will live in the City of Light while she prepares to film a feature on the life of Marie Antoinette with Kirsten Dunst.

INVESTIGATING CARDIN: Few know the exact number of licenses Pierre Cardin has. And apparently the designer doesn’t know, either. Officials in Paris have opened an investigation into whether Cardin falsified accounts after complaints that he had granted exclusive licensing agreements for the same products to two separate companies. A spokesman for Cardin declined to comment. The investigation, being headed by hard-nosed financial judge Renaud Van Ruymbeke, stems from a complaint by Switzerland’s MMS International that it had the same exclusive sportswear license with Cardin as Greece’s Surant. Cardin, 82, has been trying to sell his empire for several years now. In early September, he moved to accelerate the process by holding a fresh round of talks in Paris with bankers trying to round up a buyer. Retail sales of Cardin products are estimated at $1.5 billion. But the designer insists on running virtually every aspect of his company himself secretly, and some recent reports have suggested Cardin is heavily in debt. With some 800 licenses, his business interests also include the Maxim restaurants, hotels and a theater in Paris.

This story first appeared in the October 6, 2004 issue of WWD. Subscribe Today.

HOT TO CHILL: Designer duo Dan and Dean Caten of DSquared decided to make a pit stop in Paris before heading across the channel for the inauguration of a new corner at Harvey Nichols in London. “We didn’t have time to relax in Milan and that’s exactly what we’re doing now,” Caten said. Not that the designers plunked themselves in a cafe to chill. Instead, the twins hosted a raucous party at the VIP nightclub on the Champs-Elysées and busted moves with model Alek Wek until the wee hours.

TAKE ONE: Viktor Horsting and Rolf Snoeren of Viktor & Rolf are ready for their close-up. A camera crew is tracking the Dutch design duo in Paris for a documentary slated to run on Dutch television next spring. “They’ve been following us for over a year now,” Snoeren said, by this point oblivious to the microphone forever hovering a few inches above his head. No doubt the cameras will be whirring overtime today, as the crown princess of The Netherlands, Mabel Wisse Smit, whom they dressed for her wedding last April, is expected to sit in the front row.

AND TWO: Speaking of documentaries, Karl Lagerfeld’s couture collection for Chanel last July is the subject of a five-part series to be aired on Europe’s Arte channel in the next months. Paris fashion journalist Mademoiselle Agnes charted the collection from its inception to the runway. “We spent two months following Karl and all of the process,” said Agnes. “I was most impressed by the atelier and the quality of its handiwork.”

ELECTRIC DREAMS: Trust Nicolas Ghesquière’s gaggle of Parisian friends to dabble in the experimental. To wit: Joanna Preiss, a sometime runway model and muse of the Balenciaga designer, plans to collaborate with several French experimental electronic artists for her next album, due out in January. She described the concept as “pop songs revisited.” Rounding out Ghesquière’s front row were Charlotte Gainsbourg and Francoise Hardy. Missing in action was Robert Polet, Gucci Group’s new chief executive officer, who is slated to be at Stella McCartney today.

CROSS-DRESSER: Every year at least one strapping actor crosses his fingers for an Oscar nomination and dresses as a woman for a role. This year’s candidate is Billy Crudup, who, in “Stage Beauty,” plays a 17th-century actor known far and wide for his interpretation of Desdemona.

“I’m very grateful I’m a man,” Crudup said Monday night at a party for the movie at the Asprey store on Fifth Avenue. “Those torture chambers that women wear — corsets — are horrific.” Crudup, who had his fair share of corsetry for the film, was wearing the same Banana Republic suit he had bought in graduate school. “I could use a new suit, could use new shoes,” he added.

Also celebrating were co-stars Rupert Everett and Claire Danes (who is currently dating Crudup), director Richard Eyre and Liam Neeson and Laura Linney, who headlined Eyre’s Broadway production of “The Crucible” in 2002.