SPECIAL DELIVERY?: In recognition of Ralph Lauren’s contributions to the Caribbean island of Jamaica, the country is considering putting the designer’s image on a stamp. The Polo Ralph Lauren chairman and chief executive officer... 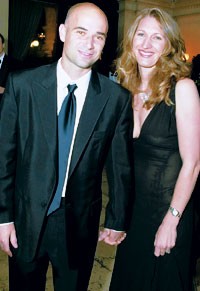 SPECIAL DELIVERY?: In recognition of Ralph Lauren’s contributions to the Caribbean island of Jamaica, the country is considering putting the designer’s image on a stamp. The Polo Ralph Lauren chairman and chief executive officer would be among a group of prominent resort owners, including Christopher Blackwell, chairman of Island Outpost, and Gordon Stewart, chairman of Sandals Group, to be featured on postage stamps this fall in Jamaica, according to a report in the Jamaica Observer on Wednesday.

Lauren could not be reached at press time, but the designer, who is a shareholder in the Round Hill resort in Montego Bay, is believed to be the first American to be stamped in Jamaica. A handful of Italians — Dolce & Gabbana, Giorgio Armani, Prada, Krizia, Gianfranco Ferré and Laura Biagiotti — were featured in a series of stamps in Italy two years ago, but were only represented by their designs.

Edith Head, the Oscar-winning Hollywood costume designer who died in 1981, was pictured in a 2003 release from the U.S. Postal Service dedicated to the craft of filmmaking. No individuals are featured on U.S. postage sooner than 10 years after their deaths, except for presidents.

CASH AND PRIZES: The wine company Ecco Domani is upping its involvement with the New York fashion community next year by offering designers six cash prizes — rather than five, as it has for the past three years — and increasing the award to $25,000 from $20,000. The company will name five women’s wear designers and one men’s designer as its recipients in 2005, said a spokeswoman for the Ecco Domani Fashion Foundation. They will be able to use the money toward the production of their fall runway shows in February. Applications for the prizes are due by Oct. 15 and are available at eccodomani.com.

ACE CROWD: The International Tennis Hall of Fame’s 50th Anniversary Jubilee this month brought the well-heeled crowd to Newport, R.I., the seaside city of mansions, for a week of parties amid some genteel grass-court sparring for the annual Van Alen Cup event. Prince Albert of Monaco, symbolically stepping in for his mother, Grace Kelly, who presided over the Hall of Fame’s opening ceremonies in 1954, served as master of ceremonies at a gala at the Vanderbilt estate, The Breakers. Steffi Graf, one of three Hall of Fame inductees this year, turned up in a plunge-front black gown and moonstone necklace, but it was her other major accessory that drew comment.

“Hey Steffi, can I ask your husband to dance?” one partygoer kidded as Graf and Andre Agassi made their way through the crowd.

“Go ahead, but he’s never danced in his life,” Graf shot back.

Perhaps Graf was just displaying what fellow Hall of Famer Chris Evert, cool in a sky-high pair of patent leather stilettos, described as her signature “physical brilliance and mental toughness.”

PRINGLE’S WAY: Pringle, the luxury Scottish knitwear brand, has introduced a free embroidery service in its London flagships. Customers can have their initials, names — or a special message — embroidered onto their knits in block or italic print. The work is done on the spot in Pringle’s Bond Street store, and is free. A company spokeswoman said Pringle, which was founded in 1815 and produces men’s and women’s ready-to-wear and accessories collections, planned to roll out the service to its units in Tokyo and Taiwan in the future.