STUDY BUDDY: Don’t look for Anna Wintour at the Dolce & Gabbana, Jil Sander, Miu Miu or Versace shows later this week, to name but a few. That’s because Vogue’s editor in chief plans to leave Milan after the Gucci show on... 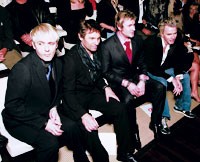 STUDY BUDDY: Don’t look for Anna Wintour at the Dolce & Gabbana, Jil Sander, Miu Miu or Versace shows later this week, to name but a few. That’s because Vogue’s editor in chief plans to leave Milan after the Gucci show on Thursday because of a family commitment. She’s helping her son, Charlie, get settled in at Oxford University. “I’m going to preview all the ones I’m missing,” she said. “Then it’s straight to Paris.”

HUNGRY LIKE THE WOLF: The members of Duran Duran recently said they love nothing more than a clothing grab. And as he filed into the Giorgio Armani show on Tuesday, band member Nick Rhodes looked like a very happy customer. “Oh, it was a very big one,” he quipped. “I’m loving the clothes,” piped in Andy Taylor. Simon Le Bon, his hair as spiky as ever, posed for the paparazzi with his glamorous wife, Yasmin. But another celebrity of yore got the biggest applause when she swept into the runway theatre: Armani regular Sophia Loren.

WHITE FLAG: It looks like Giorgio Armani has ended his feud with French Vogue, whose editors have been absent from his shows since 2002. Carine Roitfeld, editor in chief, sat in the front row at Armani’s show on Tuesday. “Let’s say we know each other better,” she offered as an explanation later at D&G. “And I actually preferred it [to other shows],” she added.

DIAMOND LIFE: Milan’s luxury hotel scene is heating up, with several members of the fashion flock testing out the ultra-posh new Bulgari Hotel, from Vanity Fair editor in chief Graydon Carter to Karl Lagerfeld, who has the rooftop penthouse, naturally. “I like it a lot. It’s like a piece of jewelry,” he said. “It’s very design, and very detailed.” Not that he feels homesick. “I have the same bathtub at home,” he noted.

BOUCHERON’S LOSS: A few months after the departure of Solange Azagury Partridge, Boucheron’s worldwide communications director Angelo Sensini is also heading out the door. Sensini, who earlier worked at Nina Ricci and Trussardi, plans to set up his own consulting firm in Paris, specializing in communications and branding. And he’s already landed a gem of a client — Christian Dior Fine Jewelry.

MODEL GUEST: Two seasons ago, Kate Moss surprised the fashion world by returning to the catwalk for Burberry. But this season, she took a seat in the front row after hanging out with Christopher Bailey backstage. “She’s part of our family at Burberry,” said the designer backstage. “She’s an icon of British style.” And a busy one at that. When asked what projects she is working on, she answered “lots and lots.”

ALL IN THE FAMILY: For Anna Molinari, Beatrice Borromeo is the ideal woman. The aristocratic Borromeo, whose sister Lavinia married Fiat heir John Elkann earlier this month, stars in the designer’s ad campaigns and walked the runway at Blumarine on Tuesday. She’s also booked for Molinari’s Blugirl show on Friday. Meanwhile, off the runway, Borromeo’s grandmother, Marta Marzotto, beamed from the front row, flanked by Matteo Marzotto’s current and former girlfriends. But hey, no hard feelings: everyone got along just fine. And the family ties continued down the row as actress Martina Stella, engaged to Lapo Elkann, John’s brother, clapped away.

LIKE MOTHER LIKE DAUGHTER: Asia Argento, a front-row regular in Milan and Paris, decided it was high time to bring her daughter Annlou to her first runway show. And what better place than D&G’s luau bash? Although the show started quite late, the toddler amused herself by playing in the set’s sandy runway. Argento, who is currently shooting a George Romero film with Dennis Hopper, described herself as a true fashion disciple. “I really think fashion is interesting,” Argento said. “Aesthetically, it’s fascinating.”

SOCIALITES AND STRAPPY SANDALS: It was hard to tell the difference between the models and the American Ballet Theatre principals at a cocktail party at Frederick’s last week — they were all wearing Cole Haan boots and heels to toast chief executive officer Matt Rubel’s support of ABT. “It’s nice to see that people are wearing the product,” Rubel told dancer Julie Kent, who was showing off photos of her newborn son as Irina Dvorovenko and Muffie Potter Aston looked on. Such ladies as Jeanne Greenberg Rohatyn, Alex Kramer, Serena Boardman and Gigi Mortimer got to feast their eyes on even more shoes at a lunch Vanessa Noel sponsored at Christie’s on Monday to kick off the Eleanor Lambert jewelry auction. All the socialites were given a shoebox filled with $300 in Vanessa Noel money to redeem at the designer’s new store, which will open in October on East 64th Street. “For $300, we may only get to buy one shoe,” worried one attendee.

MARITAL BLISS: If Monique Lhuillier’s having a major moment in dressing brides, then Ralph Lauren is the go-to guy for prospective grooms. Kevin Costner wore a lightweight cashmere peaked-lapel suit that was custom made by Lauren for Costner’s nuptials on Saturday to Christine Baumgartner, who was decked out in Lhuillier. Costner’s been a regular at Lauren’s men’s shows in Milan and has frequently worn Lauren to red-carpet affairs, but was said to have personally called the designer to request a custom look for the wedding. The two-button suit featured a matching vest, along with a black tie with creamy gray polkadots that matched Baumgartner’s gown.

And Lauren’s not going on a honeymoon vacation just yet. The designer has also reportedly been asked to design another custom suit for a groom-to-be, this time outfitting Billy Joel for his wedding to Kate Lee, planned for October.

MODEL ACQUISITION: Daria Werbowy, who holds a prominent position on the model-heavy September cover of Vogue, was among the guests who turned out for the opening of the Mario Sorrenti and Ben Ruhe collaborative exhibit at the Visionaire Gallery during New York’s Fashion Week this month and was so taken with one of the works on display that she went back last week and bought it. The untitled painting features the faces of Werbowy and Gemma Ward, inserted in Ruhe’s painted catsuits. Visionaire’s representatives would not disclose the price Werbowy paid for the work, which was the largest in the series, but paintings in the show are priced from about $4,500 to $10,000.

KEEPING IT IN THE FAMILY: On Saturday night, stylist Alexandra Posen — Zac’s sister and collaborator — attended the opening on Saturday night of a new gallery on Olive Street in Williamsburg, Brooklyn, called Morsel. That’s because Alexandra’s hubby, Nils Folke Anderson, has two sculptures in the opening exhibition, dubbed “Inaugural Ball,” which also features drawings and paintings. Anderson’s featured works are located in the gallery’s outdoor project space and consist of a kite-like interpretation of a rooftop television antenna — painted in gradations of blue to play off the daytime sky, curators Elizabeth Cooper and Jan Mollet noted — and a mop and bucket, which has orange gradations. Both works are spotlighted for nighttime highlights. How subtle.