THE CAT PACK: Perhaps the most random guest at Bendel’s “Catwoman” after-party on Wednesday was Tony Danza. The reason he gave for showing up? “Halle Berry,” he gasped. The subtext of his appearance was... 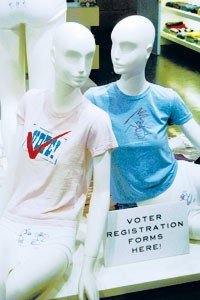 THE CAT PACK: Perhaps the most random guest at Bendel’s “Catwoman” after-party on Wednesday was Tony Danza. The reason he gave for showing up? “Halle Berry,” he gasped. The subtext of his appearance was equally obvious. The former star of “Who’s the Boss” is busy plugging his new talk show, which debuts in September. “I heard Bendel’s and I thought I’d get a corned beef sandwich,” he added. Clearly he needs to work on those one-liners.

Also drinking White Russians and ogling Berry in the VIP area were Shannen Doherty, Theodora and Alexandra Richards, Michael Kors, Aerin Lauder, model Omahrya Mota, Esteban Cortazar and Benjamin Bratt, clad in Dolce & Gabbana like his co-star. Did Bratt wish Bendel’s had assembled a line of accessories for any of his other movies, such as “Pinero” or “Miss Congeniality”? “I don’t really think about that,” he said. Meow.

ELECTION BRIEFS: Activism takes many forms, and you can trust Marc Jacobs to put his own idiosyncratic and, well, wacky spin on it. To wit, his Marc by Marc Jacobs shop window on Bleecker Street last week featured T-shirts mocking his moniker, with “Marc Jackass” emblazoned on them. Now the display is filled with fashion voting paraphernalia in the form of a pair of panties that read “Remove Bush.” Additionally, T-shirts and hoodies are available along with voter registration cards.

“I want people to vote is basically it,” explained Robert Duffy, president of Marc Jacobs International. “We work in a creative industry, and we’re being creative about it. There is sign language on some of the pieces and actually a lot of people came in to say thank you.”

Witticisms aside, it’s for a political cause —100 percent of the proceeds go to Downtown for Democracy. The prices range from $15 for panties, $25 for Ts, and $35 for the sweatshirt hoodies.

ARMANI & FRIENDS: Joining Giorgio Armani in the honorees circle at the Fashion Group International’s Night of Stars benefit this year will be Marc Jacobs, Stella McCartney, Helmut Lang and architect Billie Tsien. The Oct. 28 event also will include the presentation of a humanitarian award to Target Corp. and the FGI’s “Stargazer Award” to Chanel Inc. The theme of the event, which will be at Cipriani 42nd Street in Manhattan, is “The Conceptualists.”

ROLLERGIRL ON THE FLY: Heather Graham is out of town, but that didn’t get in the way of some afternoon shopping Wednesday. Her assistant ducked into Alison Brod’s Astor Place office to pick up some freebie James jeans and Priorities T-shirts for the actress, including one imprinted with “Get Your Priorities Straight…Stand By Your Manolos.” Apparently, thanks were not needed for Priorities’ designer Stefani Toonkel-Greenspan, who sat quietly reading nearby.

REALLY THINK PINK: Be prepared to set the alert level a high shade of pink July 29 when Victoria’s Secret rolls out the national launch of its new hot subbrand, Pink. The hype-filled event will be hosted by Pink spokeswoman and model Alessandra Ambrosio at the Victoria’s Secret flagship in New York’s Herald Square. Ambrosio is expected to be decked out in a Pink tank, bra and HotPants, and will arrive at the flagship in a pink Hummer accompanied by “Team Pink” — a group of 40 college-age women recruited by Victoria’s Secret at 25 colleges nationwide. The lingerie enlistees — all of whom will be wearing Pink lingerie and related fare — will distribute promotional items branded with pink and white logos and polkadots including hats, Frisbees and beach balls, and a mascot Pink dog.

FOR ART’S SAKE: Theory, General Motors, Motorola and MTV Networks are among the sponsors of the fifth annual Hamptons Benefit for Art for Life, hosted by Russell and Kimora Lee Simmons and the Rush Philanthropic Foundation. A fund-raising celebration that helps expose New York City youth to the arts, the event will be held Saturday night at the Simmons’ East Hampton estate. The benefit will honor youth and arts patron Sherry B. Bronfman; Michael Goldstein, chairman of the Toys ’R’ Us Children’s Fund, and artist Gordon Parks. Kelly Ripa will serve as host and Chevy Chase will conduct an art auction. In addition, young people will showcase their talents with fencing and dance performances.

Earlier in the day, Theory will host a day of shopping and champagne at 1-4 p.m. at its new East Hampton store at 46 Newtown Lane. Theory will debut the fall and winter collections and schedule private shopping appointments with retail specialists. A percentage of the proceeds from the day’s sales will go to VH1 Save the Music Foundation, which supports music programs in public schools.