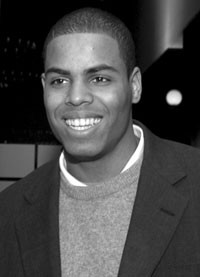 THE NEW MATH: “The more the merrier” seems to be the new motto at Louis Vuitton. After showcasing six supermodels in its current spring advertising, the French luxury firm is said to be banking on a gaggle of hot young actresses for its upcoming fall campaign. According to sources, Scarlett Johansson, Chloë Sevigny and Christina Ricci are among those slated to pose for photographers Mert Alas and Marcus Piggott, who famously lensed Jennifer Lopez for Vuitton last year. Vuitton officials could not immediately be reached for comment.

LIKE FATHER, LIKE SON: Oscar de la Renta’s son, Moises, is about to get into the biz. But rather than ride on the fashionable coattails of his father, the 19-year-old, a communications freshman at Marymount Manhattan, is launching his own line, Moi, a denim-heavy collection for women and men that will also include accessories. When asked how influenced he is by dear old dad, young de la Renta said, “I go to him first for everything. He’s my mentor as a father and a designer. I have the best of both worlds.” He also added that getting into design “is just a natural progression — something that I’ve been around my whole life.”

WINING AND DINING: Some are already dubbing it “the last supper.” On Friday, Gucci Group chief Domenico De Sole will be the guest of honor at a massive farewell dinner at Gucci headquarters in Florence in advance of his official April 30 departure. Hundreds of employees will attend, with some managers and other bigwigs also expected to fly in especially for the event. Like Tom Ford, who had several runway swan songs, De Sole has been feted at a series of farewell dinners in recent weeks by franchisees, financial analysts and others. But this is the big one.

MILAN IN PARIS: Milan Vukmirovic, the former creative director at Jil Sander who was ousted when Sander returned a year ago, is slowly getting back into the fashion game. He’s collaborated with Paris jeweler Dinh Van to create a 12-piece collection of jewelry dubbed “White and Black.” It’s slated to be unveiled in Paris next month. Turns out Vukmirovic, who was creative director at hip boutique Colette before succeeding Sander at Prada Group in 2000, has a long history with the jeweler, having brought the brand into the Colette fold during his tenure there. But that’s not all Vukmirovic has been up to. He also recently designed a sofa for Domeau & Peres that was unveiled during the Milan furniture fair last week.

HELENA SNAPS: Helena Christensen clearly has a soft spot for Australia. The onetime partner of a high-profile Australian — the late INXS frontman Michael Hutchence — Christensen is preparing to wing her way back to Sydney to ramp up the celebrity quotient at Mercedes Australian Fashion Week, May 2-8, as “guest photographer” for the local edition of Harper’s Bazaar.

In another great get for Harper’s — which has in years past snagged such guest editors for the event as Cate Blanchett, Sarah Wynter and Elle Macpherson — the supermodel-turned-photographer will attend the spring 2004-2005 collections together with the HB team, including editor Alison Veness-McGourty and new fashion director Claudia Navone, who was formerly fashion director of The Sunday Times of London. While past guest editors helped edit photographs of the collections, Christensen will herself help shoot the clothes from the front row, backstage and a studio — to be published in Bazaar’s June/July MAFW issue, out May 25.

SMELLS LIKE THE NEXT TIP: Could John Varvatos’ first scent — which was feted during a launch party at Manhattan’s Canal Room Monday night — soon appear on “Queer Eye for the Straight Guy?” The designer himself has appeared on the Bravo television show and two of the “fab five” (Carson Kressley and Ted Allen) appeared at the party Monday. Varvatos’ scent, however, hasn’t been featured — at least not yet. Word is executives for the fragrance marketer, Zirh International, want to get the Varvatos scent onto the show. In addition to Kressley, who was Varvatos’ former assistant at Ralph Lauren, and Allen, party attendees included Jason Patric, Michael Imperioli, Ryan Adams and Rocco DiSpirito. Artemis recording artist Jesse Malin and his band played a set. That performance was capped by the news that the fragrance generated $223,000 in sales during its first month at Saks Fifth Avenue.