THE PARTY GIRL: Catherine Malandrino’s presentation on Sunday is twofold. Not only will she unveil her spring collection but also her yet-to-be-opened store in the Meatpacking District. The theme of her show is “The... 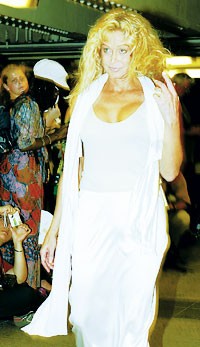 THE PARTY GIRL: Catherine Malandrino’s presentation on Sunday is twofold. Not only will she unveil her spring collection but also her yet-to-be-opened store in the Meatpacking District. The theme of her show is “The Party,” and, with that in mind, Malandrino will feature models in vignettes evoking a convivial social atmosphere. The 4,000-square-foot space was designed with architect Christoph Pillet. “We wanted to create a landscape,” said Malandrino, “with the idea of bringing the outside in.” To that end, the space is done in hues of green and decorated with vines. We’ll see if it’s swinging on Sunday.

SIMPLE DEAL: Nicole Ritchie is looking to follow in the footsteps of her famous “Simple Life” co-star, Paris Hilton. Seated in the front row of the Vera Wang show Friday, Ritchie said she’s developing a makeup and fragrance line. “We’re in the beginning stages,” she said. In New York for the day, Ritchie said she wanted to attend her first fashion show, and Wang’s had special meaning. “I was a figure skater when I was young, and Vera designed Nancy Kerrigan’s outfit,” she said. “I wanted that dress, and I had someone make a duplicate of it.” While she was seated, a Judith Ripka rep placed a huge rock on Ritchie’s finger (an 18-carat canary veridian stone set in 18-karat yellow gold and diamonds), as the paparazzi snapped away. Ritchie had borrowed one of the firm’s rings and fell in love with it, and wanted it in yellow, said a company spokeswoman. “It’s our gift,” she said.

Meantime, Jennifer Connelly, who was seated next to Vogue editor in chief Anna Wintour, said she wore one of Wang’s dresses to a GQ event recently and had just returned from London. She’s been travelling with her baby and husband, Paul Bettany, who’s been doing press for his new movie, “Wimbledon.”

“I’m going to the premiere Sunday,” said Connolly. And what will she be wearing? “Chloé.”

BOOK PARTY: It was 7th on Fifth Friday night as Vogue magazine hosted a benefit at the main branch of the New York Public Library. More than 250 spectators turned out to listen to readings by Vera Wang, Sean “P. Diddy” Combs and the design team of Proenza Schouler, Jack McCollough and Lazaro Hernandez. As the event was getting under way, Wang sat by herself with a copy of “Anna Karenina” open in her lap, rehearsing the passage she’d selected. “Everyone told me I had to be quick or I’d get the hook,” she said. “But it’s hard to do Tolstoy rapidly.” McCollough and Hernandez chose Shel Silverstein’s “The Giving Tree” — “Our show was yesterday, so we were feeling something light,” explained McCollough — while P. Diddy read “Just a New York Poem” by Nikki Giovanni. (You were expecting, maybe, “The Great Gatsby”?) As for Vogue editor in chief Anna Wintour, she didn’t read, but not for want of material. “I have many favorites,” she said. “I’m a big Shakespeare fan. You can learn everything by reading Shakespeare.” A fan of tennis as well as the Bard, Wintour was planning to take a break from Fashion Week to attend a U.S. Open match today. “I was devastated when Andy [Roddick] got knocked out,” she said.

NEWS OF DE SOLE: Former Gucci Group chief executive Domenico De Sole and his wife, Eleanor, were spotted at Linate Airport in Milan on Thursday, flying to Frankfurt and then on to the U.S. tonight. He was in Italy with his wife for about a week for a board meeting of Telecom Italia. De Sole’s commitment to the telecommunications company means he won’t be forsaking the country of his birth. Eleanor, meanwhile, was there to shop and was excited about the buys she got at the Loro Piana outlet store. “Now I can buy other brands,” she joked, although she was carrying a Gucci bag. A relaxed De Sole said he loves living in the States and that it was time to go back. But he keeps in touch with his old Gucci mates, including Tom Ford, of course, but also people like Robert Singer, who is now president and chief operating officer of Abercrombie & Fitch. In fact, the De Soles plan to spend Thanksgiving with the Singers in Columbus, Ohio.

FASHION AS A CURRENT EVENT?: Well it is now for Italian-born Magnum photojournalists and Olympus Visionaries Alex Majoli and Paolo Pellegrin. While covering the war in Kosovo and documenting the devastation of AIDS in Uganda for publications like Newsweek and The New York Times may have been all in a day’s work, the photographers, who both just returned from covering the war in Iraq, have moved on to another challenge — New York Fashion Week. Shooting fashion for the first time ever in their careers, Majoli and Pellegrin are backstage at this spring’s collections, shooting black-and-white documentary still images for Magnum’s permanent archives and for a possible upcoming exhibit. So far, the two have captured moments from shows such as Heatherette, Kenneth Cole, Ducky Brown and Zac Posen.

MANNEQUIN MAKEOVERS: While Sunday’s DKNY show is not your run-of-the-mill presentation — the label has rented out Pastis until dinner for three hours of “Sunday brunch” walk-throughs — that didn’t stop makeup artist Guillermo Fernandez from doing hair and makeup for the show’s 26 mannequins. “They didn’t want the type of makeup and wigs [that] would [make] them look like department store mannequins,” Fernandez noted. Through trial and error, he has removed existing color from the mannequin’s lips and applied Bobbi Brown, Prescriptives and Laura Mercier makeup, “to see what stuck.” It remains to be seen whether or not the mimosas will be as real as the cosmetics.

GENERRA’S LITERARY EFFORT: Generra has switched its spring presentation not only in time, but also format. Rather than the traditional presentation, Generra designer Tony Melillo is instead hosting a cocktail party on Tuesday from 6-8 p.m. on the new rooftop space of the fashion-infested Maritime Hotel. And there will be no models, unless as invited guests. Instead, Melillo’s spring collection will be featured in the pages of a new book called “Polaroids by Kelly Klein,” in which the clothes were styled on models by Camilla Nickerson and art directed by Sam Shahid.

NO SWEAT: Farrah Fawcett made the last pass down Yeohlee’s underground fashion show Thursday at the 42nd and Sixth Avenue subway station. The former “Charlie’s Angels” star could have swooned from the heat, but not the experience.

Wiping her brow after the show, she said, “You know how in Vanity Fair or on ‘[Inside] the Actors Studio,’ they ask, ‘What’s the one thing you would want to do least in life?’ Mine used to be an accountant. Now it’s going to be a runway model.”

BEST-DRESSED BABIES: Lucy Sykes, editor at large at Marie Claire and a freelance stylist and consultant, has more on her hands than lending a hand at runway shows for Liz Lange and Tommy Hilfiger. She’s also in the midst of launching her own fashion collection, targeted at a young demographic.

Sykes has designed a collection of children’s wear inspired by her own fashion favorites and those of her husband, Euan Rellie, using their 13-month-old son, Heathcliff, as a house model. Among the first pieces for spring from Lucy Sykes Baby are a yellow seersucker jacket and madras pants, both based on pieces from Euan’s closet by Thom Browne, and others that reflect images from their home in Amagansett, N.Y., such as a bandanna minidress or pants that match the ticking of a bedspread. “It’s a very sophisticated look,” Sykes said. “A lot of babies wear big, baggy things, but this is more fitted.”

FASHION CHARGE: American Express is taking to the runway. The giant credit card company held a U.S. Open-themed fashion show Tuesday night in Rockefeller Center featuring men’s and women’s looks from Fila, Nike and Adidas. Amex is a title sponsor of the Open and always runs a series of events during the tournament, but this is the first time it has had a fashion show. Instead of the usual suspects, the event drew tennis players James Blake and Bob and Mike Bryan, who modeled spring looks to loud and pulsating music. Fresh from her loss against Lindsay Davenport, Venus Williams was also on hand, although she shunned tennis apparel in favor of Replay jeans, a striped cropped top and new diamond earrings she had just picked up in the Diamond District. “Serena [Williams] and I laugh because other players always copy us when it comes to fashion,” Williams told WWD. “We wear big earrings on the court and now other people do, also.” In addition, Williams said she is going against the grain when it comes to the new modesty in fashion. “I have a new goal — I want to wear things now that show off my midriff.”

FASHIONING EBAY: EBay fans can now browse fashion week information and trends on the auction site. This season, the Web site is running a fashion week blog edited by style director Constance White, in addition to sponsoring shows. “EBay has a rapidly expanding fashion business, and we want to keep it going,” White said. “Sponsoring shows is also a way for us to show support for the fashion community.” The blog, at eBay.com/fashionweek, will showcase runway looks and trends and provide behind-the-scenes insight, she noted. Blog readers also can click on links that will take them to auctions selling trends of the season. While the company sponsored Narciso Rodriguez’s show in 2003 and Proenza Schouler’s in 2004, this season, it’s upping its involvement by sponsoring Mao Space, which showcases 10 new designers, and maternity designer Liz Lange as well as Kevan Hall during Los Angeles Fashion Week. The company also is sponsoring an auction after the shows end where consumers can purchase items right off the runway from these designers, White said. Meanwhile, eBay now sells 174 pairs of women’s jeans an hour, and the highest-priced item to date this year is a multicolored Louis Vuitton bag, which sold for $59,000. No wonder it wants to strengthen ties to the fashion community.

IN THE PINK: These days, new mother Gwyneth Paltrow is more concerned about diapers than designer clothes. But that didn’t stop the Moschino press office from spreading the word that Apple’s mom was spotted last week, pushing her stroller in one of its pink cashmere sweaters.