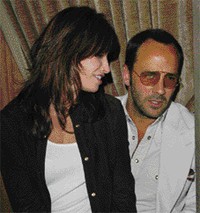 TOMS TOMS: New school met old school last Wednesday night when Tom Ford and Bottega Veneta creative director Tomas Maier entertained 60 of their L.A. pals at Diaghilev, a Russian five-star that’s as opulent as it is campy, and the unlikeliest of places for the pair. Whether it was the fruit-infused vodka shots or the end of a long day — Ford was in L.A. shooting his latest campaign for Gucci, Maier spent nearly 24 hours traveling from Japan to get to L.A. — the party wasn’t exactly lulled by the live harp. Table-hopping were guests like Gina Gershon, Sheryl Crow, Jacque Getty, Lisa Eisner, Ed and Danna Ruscha, Mena Suvari, Liz and Frank Goldwyn and Bridgette Romanek. Ford jokingly wrestled Mitch Glazer into a booth, as the producer’s wife Kelly Lynch roared on. The evening got under way earlier at the Rodeo Drive Bottega door where Maier joined co-hosts Getty, Ali MacGraw, Maria Bell, Julia Sorkin and Krista Smith for a party benefitting PS ARTS and MOCA’s Apprentice Program. The occasion also marked the launch of “Lunar Landscapes,” 10 lacquered one-of-a-kind boxes ticketed at $3,900 and a second collaboration between the house and artist Nancy Lorenz.

JEWELS ALL AROUND: Jewelry has become a favorite for the luxury goods set with houses such as Louis Vuitton and Christian Dior all starting their own fine jewelry collections in recent seasons, and now Prada is getting in on the action. But Miuccia Prada has always preferred to do things her own way. Rather than introduce a line of Prada gems, the company has teamed up with jeweler-to-the-stars Fred Leighton and later this month will start selling select Leighton pieces in the spacious Prada SoHo flagship. Leighton’s antique and estate pieces — which are known for their intricate designs and large diamonds — will be sold in a special area downstairs in the Rem Koolhaas-designed store. A party celebrating the collaboration is planned for Nov. 11 at the store.

GENE REJUVENATION: Target has Isaac Mizrahi and now Marshall Field’s will have Gene Meyer. Meyer, who closed his signature men’s wear house last summer, has signed a deal to design a collection of men’s and women’s sportswear exclusively for the department stores, which are a division of Target Corp. While Meyer had been rumored to be developing a line for Marshall Field’s for several months, it was confirmed by a spokeswoman on Monday that the collection will launch for spring retailing.

ZAC ATTACK: Azzedine Alaïa has Kevin Bacon beat. There are very few degrees of separation between Alaïa and, it seems, everyone in the fashion world. To wit: Zac Posen, in Paris Monday to show his spring 2004 collection to the French press, had a meeting with the acclaimed designer at the top of his things-to-do list. “He’s the coolest,” said Posen. “No one makes better clothes than he does.” Posen first met Alaïa while he was still a student at Central Saint Martins in London and credits the designer for introducing him to the broader fashion world and the likes of Naomi Campbell. Meanwhile, Posen disclosed an unusual project: a six-minute film he produced with photographer Craig McDean, model Erin O’Connor and dancers from the Martha Graham company. In it, the dancers are the dresses, forming human sculptures on O’Connor’s body. Look for the high-concept collaboration this month on Nick Knight’s Web site, showstudio.com.

BE OUR GUEST: Chanel is hosting an unprecedented open house — virtually, anyway. Starting today, visitors to its Web site, Chanel.com, can take a virtual tour of its Rue Cambon headquarters, design studios and Gabrielle Chanel’s famed apartment, personally guided by the likes of actresses Jeanne Moreau and Virginie Ledoyen. The online exposé also extends to important addresses in the neighborhood, with Karl Lagerfeld looking in on Chanel’s jewelry showrooms on Place Vendôme while his muse Lady Amanda Harlech checks out Coco’s home away from home: the Ritz hotel.

ONLY IN NEW YORK: Gossip columnist Cindy Adams is pulling out all the stops — as in stopping Fifth Avenue traffic — for this weekend’s launch of Jazzy Couture, her collection of doggy apparel and accessories. In front of Saks Fifth Avenue on Sunday afternoon, she will host a Jazzy on 5th street fair complete with clowns, stilt walkers, artists painting dog portraits with their adoring owners and vendors selling Jazzy Couture schnauzer-size leather trenches and sparkly Ts with detachable marabou collars. Adams’ Yorkie, Jazzy, is the inspiration for the runway ready collection.