When Valentino receives the Fashion Group International Superstar Award from presenter Meryl Streep at Thursday's Night of Stars gala, he may want to glean a few acting tips from the Oscar winner. 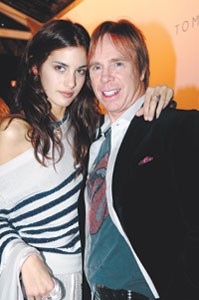 VALENTINO VIES FOR OSCAR: When Valentino receives the Fashion Group International Superstar Award from presenter Meryl Streep at Thursday’s Night of Stars gala, he may want to glean a few acting tips from the Oscar winner. The two also are pairing up onscreen, with Valentino shooting a cameo appearance in “The Devil Wears Prada” while he’s in town. It’s part of the designer’s active social schedule in New York. After Tuesday night’s in-store cocktail party, where a bevy of socialites were expected, the Venetian Heritage hosted a private dinner for Valentino and a number of “titled Europeans.”

TOMMY’S TUNE: Fashion Rocks in Monte Carlo may be over, but that wasn’t stopping the music for Tommy Hilfiger. The designer last week feted his new 16,145-square-foot flagship and corporate complex with live performances from Amerie and disco masters Chic. Several hundred guests attended the bash, including Italy’s First Daughter Barbara Berlusconi, model Sonja Kinski, a smattering of local television personalities and soccer stars. Organizers converted the showroom space into a disco area with an underlit dance floor á la “Saturday Night Fever,” while they erected a small stage in a canopied courtyard for the performances. Hilfiger, clad in a matching T-shirt and jacket with crystal-studded Rolling Stone tongue logos and houndstooth trousers, made his way to the front of the crowd, where he and cigar-smoking Hilfiger Europe chief Fred Gehring got funky to Chic hit “Dance, Dance Dance.” Hilfiger said he’s pleased to have found such a great location in Milan. “It’s a global brand. It’s no longer just an American brand. Young people worldwide love preppy classics with an edge. That’s what we’re giving them.”

GWEN COME LATELY: Ashton Kutcher and Demi Moore, with daughter Scout in tow, waited as late as they could for Gwen Stefani to finally show to her own party Friday night after her Hollywood Bowl concert, giving up before the singing designer arrived well past midnight. The inside of the Hollywood Museum at the Art Deco Max Factor building was brimming with revelers throwing back neon-colored shots and chocolate martinis labeled “Drink Me” and desserts signed “Eat Me” in a nod to the “Alice in Wonderland” theme of Stefani’s “Hollaback Girl” video. The song and Stefani were celebrating a milestone for hitting 1 million commercial digital downloads of her platinum single for the video. The party also previewed Stefani’s new Harajuku Lovers casualwear line, licensed with party co-host Jerry Leigh Entertainment.