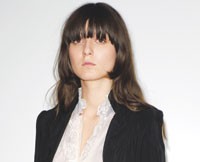 VARIETY SHOW: Teen idol? Check. Controversial rock star? Check? Burlesque performer? Check. Charlie’s Angel? Check. Christian Dior promises that range of VIPs and more in its front row tonight. Among those expected are Hilary Duff, Marilyn Manson and Dita Von Teese, Lucy Liu, Rachel Weisz and Sharon Stone. Meanwhile, a Dior retrospective kicked off Sunday night in Paris chez Didier Ludot, the vintage guru in Palais Royale, with the last dress — a 1955 silk faille cocktail number — arriving well into the party from Switzerland. “The clothes are as relevant today as they were then,” remarked Dior president Sidney Toledano, surveying the frocks. Highlights include a gown made for the actress Josette Day for the Beistegui ball in Venice, a 1978 Art Nouveau-inspired mink coat by Frederic Castet for Dior, and shoes made in 1954 by Roger Vivier for Marlene Dietrich (who was also a spokeswoman for Dior stockings).

CHANGING PLACES: Nina Ricci, slated to show its spring collection on Saturday, is about to welcome a new general manager. Christophe Hebre, who had been general manager for fashion and accessories at Rochas, joins Ricci effective Wednesday. Hebre had been at Rochas for three years and was instrumental in recruiting Olivier Theyskens as creative director there. Hebre succeeds Paul Deneve, who resigned after a two-and-a-half-year stint at Ricci, designed by Lars Nilsson. Hebre reports to Mario Grauso, president of Puig Fashion. His successor at Rochas has yet to be named.

ONLY FOR MEN: High-flying Louis Vuitton is buttressing its men’s wear. Word has it the French luxury giant has tapped Paul Heblers, a senior designer from Martin Margiela, to help boost the category. Heblers joined the avant-garde Belgian designer some three years ago and quietly moved over to Vuitton last summer.

PEER CHEER: Yohji Yamamoto is living up to his reputation as a designer’s designer. On Sunday night, he had in his front row Azzedine Alaïa, the interior guru Andree Putnam and a lesser-known, but important name to watch: Pascale Mussard. Mussard is the niece of Jean-Louis Dumas and was recently named joint artistic director at Hermès. She and Dumas’ son, Pierre-Alexis, will assume their full creative reins once Dumas retires in January. Mussard said she rarely attends fashion shows unrelated to her family-controlled company, but she made an exception. “I’m a fan, since the beginning,” she said.

CAT’S MEOW: Eva Herzigova is flirting with the silver screen. The model presented her colorful beachwear collection Monday along with a short film by controversial French director Gaspard Noé. “He’s a filmmaker version of Guy Bourdin,” Herzigova explained. “He’s very shy, very subtle, almost manipulating.” Filmed in a light-flickering hotel corridor, the two-minute piece, dubbed “Le Petit Chat,” stars Herzigova in her own two-piece design frolicking with nothing more ominous than a kitten. “We wanted it to look intimate,” she said of the film. Not that her supporting actor was a dream. “Don’t be fooled by the cute little kitty,” Herzigova said. “It was incredibly difficult to work with.”

CLOTHES CALL: Stefano Pilati has tried out a different hat: magazine stylist. The Yves Saint Laurent designer styled a fashion shoot for the December issue of Harper’s Bazaar, mixing his own designs from his collection with pieces from Hussein Chalayan, Banana Republic and others. Glenda Bailey, Bazaar’s editor in chief, said the spread was shot by Tony Ward and was Patti Smith inspired. “He mixed many different designers and price points,” she said. “He’s just got such a great eye.”

RUSSIAN AROUND: Model Natalia Vodianova is lurking around Paris Fashion Week, but not on runways. On Sunday, the model and her husband, Justin Portman, joined a host of high-profile Russians in support of Igor Chapurin‘s first show in Paris. A vodka and caviar-fueled party followed, where the likes of Aliona Doletskaya, editor in chief of Russian Vogue, rubbed shoulders with filmmaker Wes Anderson, who said he’s in Paris scouting locations for his next movie.

MIRROR, MIRROR: With two treatment rooms, Institut La Colline offers sumptuous facials, relaxing body massages and soothing eye treatments, with prices ranging from 90 euros, or $108, to 145 euros, or $174. Highly appreciated in Japan, the beauty brand is known for its revitalizing skin treatments. Can’t get enough? The creams, lotions and serums are on sale, too.

STEP UP: Having achieved cult status as a clothes designer to the social set, Andrew Gn is out to shoe his ladies, too, with a footwear collection to be unveiled today at his runway show. Not surprisingly, the shoes draw on his proclivities for embroideries and decoration. “It’s really me: All about luxury, embellishment, but at the same time very, very wearable,” said Gn. The collection spans 25 styles, in three heights, from stilettos to flats, with materials ranging from python and printed fabric to raffia and beads.

HIS AND HIS: Christophe Girard, director of fashion strategy at LVMH Moët Hennessy Louis Vuitton and a deputy mayor of Paris, has presided over many marriages, including that of his LVMH colleague, Celine chief Jean-Marc Loubier, last year. But on Monday, Girard played groom. At a private ceremony presided by Paris mayor Bertrand Delanoi, Girard said “I do” to his companion of 10 years, filmmaker Oliver Meyrou. (Twelve of Paris’ 20 arrondissements endorse “PACS” marriage-like partnerships between couples). Also said to have attended were popular French newscaster Claire Chazal and her husband, actor Philippe Torreton, and Mazarine Pingeot.

STAGE LEFT: Fashion may be a passion for model Irina Lazareanu, but she is very musically inclined, too. The 22-year-old Canadian is recording her first single, copenned the lyrics to Babyshambles’ “La Belle et la Bete” — sung by notorious duo Pete Doherty and Kate Moss — and has just wrapped up writing an album for Anna Mouglalis, whom she met while modeling for Chanel. “I find it much more nerve-racking to be on stage than to be on the catwalk, as sharing my lyrics is sharing my private thoughts, which is quite difficult,” confessed Lazareanu. The songbird, who is slated to walk for Balenciaga today, can also dance: She was trained in classical ballet.

THIS YEAR’S MODEL: Who’s got the look? Casting directors have placed their bets. “Bette [Franke] is the most beautiful new model I’ve season this season,” asserts Maida Gregory-Boina, a casting director who works for the likes of Calvin Klein, Pucci and Jil Sander, where the Dutch 15-year-old opened the Jil Sander show last week. Gregory-Boina also noted other fresh faces: American Heather Bratton, 17; Canadian Madeleine Berrevoets, 16, and 17-year-old Belgian Hanne Gaby. Meanwhile, producer Sarah McManus said her new picks include 16-year-old Michaela Hlavackova from Prague, who is already being hailed as the new Daria Werbowy (absent this season owing to Lancôme commitments in New York); Romanian Elena Baguci, 18, who’s so sought after she refused a Gucci runway exclusive, and Russian Anna Kuznetsova, 16. What’s the new angle? “They are womanly, not girly, with a classical elegance that’s fresh and alluring,” offered McManus.

CINEMA FILE: The Cinémathèque Française, the institution venerated by New Wave directors and a favorite of film buffs since, has decamped to a Frank Gehry-designed building in eastern Paris that once housed the American Center. Renovated with four screening rooms, two exhibition halls and a film and video library, it is marking the transfer with a festival called “Renoir/Renoir,” an examination of painter Pierre-Auguste Renoir and his son, director Jean Renoir. The event is sponsored by Christian Dior.

WIE IN NIKE DEAL?: Teenage golf prodigy Michelle Wie is expected Wednesday to make the long-awaited announcement that she has turned pro and signed a deal with Nike. A press conference is scheduled at the Mandarin Oriental in Wie’s hometown of Honolulu and will come six days before the Korean-American phenom turns 16 and is eligible for professional status. Nike executives declined to comment Monday on whether they had signed Wie, but press reports said she is expected to announce a deal with the athletic giant that would pay her between $4 million and $5 million a year, and said she also has deals lined up with at least one other sponsor. Wie, who has already played 24 times on the LPGA Tour, has been gaining attention in the women’s field since she was 12 and is considered a savvy marketing force. Nike in recent years has been building up its golf business, and Tiger Woods is also one of its sponsored players.