WANNA SEE A TRICK?: Jack Nicholson’s been known to skip his own film premieres, but he was in top form Sunday night at his daughter, Jennifer’s fashion show. Before things got going, he strut, in his signature shades, to the... 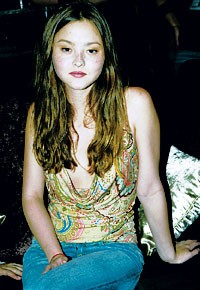 WANNA SEE A TRICK?: Jack Nicholson’s been known to skip his own film premieres, but he was in top form Sunday night at his daughter, Jennifer’s fashion show. Before things got going, he strut, in his signature shades, to the end of the runway for some friendly fire with photographers.

Once he returned to his seat and lensmen stopped chanting, “We want Jack, we want Jack,” Nicholson said his daughter is the real deal. “She has legitimate talent. I really wouldn’t come if she didn’t.”

Nicholson sat with his grandsons, Sean and Duke Norfleet, who proved it really is all in the genes. Sporting mops of wavy brown hair, the boys were quite the dapper duo wearing a houndstooth suit and Converse All-Stars (Sean) and an ACDC concert T-shirt with Burberry pants (Duke). And helping grandpa Jack mind the kiddies during the 50-minute wait was David Blaine, who dutifully performed magic tricks. “Wasn’t that something!” exclaimed the elder Nicholson.

As for his daughter, the Academy Award-winning actor noted she has won a few awards of her own. The way her father sees it, Jennifer Nicholson’s clothes have a great sense of movement and her designs have evolved in the past season or two. “They look like dresses I could sell,” he explained.

One area where the younger Nicholson could use a hand is in her promotional video. After seeing it, Nicholson said he told her, “Go with the hits. Fashion is not about fast editing. One good shot looks better than 1,000 bad ones.”

SIMPSON SAYS: Remember the season when Tori Spelling was a ubiquitous front-row presence? Well, this season, they’re saying Jessica Simpson is the new Tori Spelling (who back then was the new Sarah Jessica Parker). Simpson’s blonde tresses have been spotted on runways from Luca Luca to Oscar de la Renta, and at the J.Mendel show on Monday, she was seen studying the fashion calendar to plot her future show course. Then Spelling herself dropped by at Mendel, but promised her turn will be only for one day.

“The shows are so crazy, but I saw the gowns from last season and I thought they were so beautiful,” said Spelling, wearing a vintage gown. But she scoffed at the suggestion that Simpson had replaced her as the resident blonde. “I’m only here for one day to attend a wedding, and it was too hard to plan around that to go to any more shows.”

Simpson, for her part, showed no signs of fatigue, despite the persistence of paparazzi to photograph her from every conceivable angle. “I’m having absolutely the greatest girls’ week ever!” she exclaimed. She’s used to the attention, of course, having been trailed by photographers for her former life as a reality TV star. Asked if she had any advice for Tommy Hilfiger, she seemed positively perplexed.

“Tommy Hilfiger is doing a reality show?” she said, a hint of concern in her voice. “I don’t know if I have any advice for him, other than to make sure you have a good reality.”

GRADUATE STUDIES: Mike Nichols tagged along with Diane Sawyer to check out family pal Diane von Furstenberg’s show on Sunday, and was as surprised to be asked his take on fashion as he was his opinion on the controversial remake of “The Graduate,” which Nichols directed in 1967.

“They’re doing some weird version about a woman who figured out the woman in ‘The Graduate’ supposedly turned out to be somebody’s grandmother or something,” he said. “It’s weird.”

According to The Hollywood Reporter, the Jennifer Aniston–Shirley MacLaine film centers around a woman who discovers her grandmother was the basis for Mrs. Robinson. Not that Nichols was ready to write off the project altogether — “Somebody who read the script said it’s funny,” said the director, who’s busy with his own remake, of sorts, creating a musical that test runs in Chicago based on “Monty Python.”

Meanwhile, Ellen Barkin, also at DVF, has been enjoying a bit of a career renaissance, having been to the Venice, Telluride and Toronto Film Festivals to promote her starring role in Todd Solondz’s new film, “Palindromes.” “It’s good when you have a movie that you’re proud of,” Barkin said of the festival circuit. “It’s really sh—y when you don’t.” Barkin likes this one. She said that working with Solondz was the “single greatest professional experience of my life.”

Others making the scene included Venus Williams, who got uncharacteristically touchy when asked if she’d watched the U.S. Open women’s final. “Why would I?” Williams asked. Vanessa Carlton was seated with Ally Kaye, Alex von Furstenberg’s girlfriend. It was Carlton’s first show this season; her new album, “Harmonium,” drops Nov. 9. She said she’d “consider” wearing DVF in her videos.

And the presentation was Josh Hartnett’s very first fashion show. “I have no idea what to expect. I mean, I’ve seen ‘Prêt-à-Porter,’” he said, referring to Robert Altman’s fashion flop. Hartnett, sporting a moustache and a baseball cap that made him almost unrecognizable, said that “a friend” was involved with the show, but wouldn’t go any further. “It’s like a beautiful fishbowl and I’m more of an observer than a participant.”

MODEL CARGO: If anyone’s wondering what happened to Karolina Kurkova and Naomi Campbell after tonight, they’re expected to jet off to the Windy City, courtesy of Valentino. The designer and Giancarlo Giammetti are flying into Chicago on their private jet today, direct from Rome, to film an interview with Oprah Winfrey on Wednesday for the upcoming special episode of her talk show that will be all about Val — the couture, the home, the fittings and a bonus on-set fashion show featuring Campbell and Kurkova. Frédérik Fekkai is winging in to do the hair.

Following the show, Valentino will fly to New York for three days, where he will host a lunch at Daniel on Thursday for 14 of his biggest couture clients.

As for Campbell — the self-admitted “grandmother” of the runways at the ripe, old age of 34 — she was all smiles at the tents Monday morning as MAC chief John Demsey presented her with the brand’s first “Star of the Week” award. He added that Campbell has been a supporter of MAC since the brand’s inception.

The award — a moc-croc cosmetics case stuffed with Campbell’s favorite MAC shades — will be produced as an exclusive for Saks Fifth Avenue and is expected to retail for about $200, which will include the case and a set of makeup brushes. (Prices for the kit stuffed with makeup can range up to $500.)

At the press conference, Campbell — clad in thigh-high white leather boots and a print dress — took the opportunity to poke fun at her diva image, joking she travels with a gaggle that includes multiple publicists, makeup artists and bodyguards. The MAC stop was her last of the week, before heading to Chicago, then Las Vegas.

GOING STRONG: Joan Collins fortunately made her entrance into Oscar de la Renta’s show before all the young stars — Ashley Olsen, Mandy Moore, Jessica Simpson, Serena Williams and Eva Mendes — created a mad crush on the runway and monopolized the attention. Collins, who was accompanied by her daughter-in-law Angela Newley, a jewelry designer, said she was on her way to Los Angeles “to talk about a series,” and would then be promoting her new book, “Misfortune’s Daughter,” which comes out early next year from Hyperion. Other twosomes in the audience were Donald Trump and his fiancé, Melania Knauss (“Oscar is a friend of ours…‘The Apprentice’ is going really well,” said Trump.)

J.J. REVEALED: J.J. Biasucci, the young man who captured Donna Karan’s attention off the runway this summer, is taking in some shows this week. The former model, spotted chatting with his friends outside Barbuto on Sunday evening, said he was picking shows here and there. Of course, he said, he was planning to attend Karan’s show on Monday, at which point a friend tugged at his sleeve and reminded Biasucci that “you’d better get us in.”

“Donna and I were introduced through some mutual friends,” Biasucci said. “We have a lot in common, believe it or not. We both went through a lot of things.”

Since their relationship began, a lot of doors have opened up for the former model. He is pursuing an acting career, writing and, he noted, “I drive a bicycle cab with my friends.” But Biasucci and Karan aren’t exclusive in one sense — Biasucci claimed he also plans to attend Ralph Lauren’s show.

HOT AIRE: Fashion Show 101 — a delayed show start hardly ever serves to heighten the hype. Take jeweler Chris Aire, for instance, who launched his collection of jewelry at Gotham Hall on Sunday night. Aire kept the cluster of celebrities like Foxy Brown and Venus and Serena Williams, editors and hangers-on sitting uncomfortably for more than 80 minutes inside a balmy Gotham Hall before the first jewel-adorned model stepped out.

Once the show started, the proverbial ice kept on coming with $175 million worth of bling-bling jewelry and watches making their way down the runway. Watches strapped around the ankle or used as pendants on gold necklaces were styling misses as were some of the men’s triangle pendants, but Naomi Campbell wowed the crowds with a $10 million diamond halter top with 300 round and fancy-cut diamonds.

In the audience were a gaggle of models, including Liya Kebede, Natalia Vodianova and Devon Aoki, who said she won’t be doing any shows this season. “I am working on my album so I am in the studio most of the time,” she said.

GLAMOUR QUOTIENT: Considering the don’t-dare-ask-me-a-question attitude of some of the celebs attending this week’s shows, it’s nice to see one acting like a mortal. Case in point — actress Bebe Neuwirth, after leaving Vivienne Tam’s show on Monday afternoon, greeted fans outside Bryant Park with nary an escort in site. Then she turned the corner on West 40th Street and caught her ride — the New York City subway.

SMELLS LIKE SOMETHING: Derek Lam has launched his first fragrance, and it’s already off the market. The designer worked with Givaudan Fragrances to created a limited edition scent for his spring show, with only 400 samples made for guests at his show on Sunday. Givaudan and Gilles Andrier sponsored the development of the scent, said Jan Schlottmann, Lam’s business partner, who worked for Givaudan before the duo started Derek Lam.

“This is just for fun,” he confessed. “It puts everybody in the mood.”