It looks like actress Rachel Weisz might have a new starring role - as the face of Burberry fragrances. 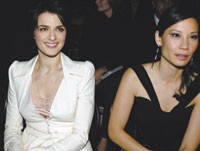 WEISZ MOVE: It looks like actress Rachel Weisz might have a new starring role — as the face of Burberry fragrances. Rumor has it the 34-year-old British actress (of “The Constant Gardener” and “The Fountain”) is set to replace Kate Moss in the brand’s upcoming advertising campaign. No one from Inter Parfums, Burberry’s fragrance license-holder, could be reached for comment. Meanwhile, back in New York, another celebrity is about to land another major ad campaign. A source there said David Yurman plans to use Australian star Naomi Watts in forthcoming spots.

Back in Paris, Weisz made her way through a crush of photographers to attend the Christian Dior show Tuesday night. “It’s such a fantasy,” she said afterward.

The beguiling brunette, who just wrapped the Darren Aronofsky picture “The Foundation,” said she was looking for a little comic reprieve. “I need a comedy role after the last one — it’s somewhat dark,” she said. “I’m a big fan of Buster Keaton.”

But celebrities are learning that fashion shows can be time consuming. “I’ve got to get back to pay my bills; it’s a nightmare,” said Lucy Liu, who was winding up her European fashion tour chez Dior. But the actress has certainly kept herself busy, filming three independent films dubbed “Three Needles,” “Lucky Number Seven” and “Rise.”

SISTER ACT: Delphine Arnault, the daughter of LVMH Moët Hennessy Louis Vuitton kingpin Bernard Arnault, is missing in action this week. But she has a good excuse. “She’s on her honeymoon,” said her father after the Dior show. “She was in Hawaii and she’s now in L.A., relaxing.” Arnault presided over his daughter’s nuptials to Alessandro Vallarino Gancia two weeks ago in a grand ceremony near the town of Bordeaux. But Delphine’s brother Antoine, 28, was back in the front row. He was taking a break from studies at INSEAD in Fontainebleau, where he’s getting his MBA. “I finish in December, and back to work in January,” the young Arnault said. “We’re thinking about different options, but it’s definitely in the group.” Before hitting the books, Arnault had worked in the advertising department at Vuitton.

STAND AND DELIVER: With her usual venue, the Bourse de Commerce, booked for a trade show through the weekend, Stella McCartney had to switch sites for her show on Thursday, meaning she had to trim some 200 places from her seating plan. But when Gucci Group chief executive Robert Polet learned of the dilemma, he sprang into action: “That’s OK. My wife and I will stand,” he volunteered.

ROCK ON: Kate Moss, shunned by many in the fashion world in the wake of cocaine-abuse allegations, has a rock-solid ally in none other than Sharon Stone. Asked about the model at a press conference in Paris Tuesday, where Stone officially announced her role as the face for Dior’s Capture skin care line, the actress said, “I understand that she’s apologized and is changing her life. People are allowed to make mistakes. If you’re in this room and you haven’t made a mistake, then I’d like to meet you … It’s not difficult to fail in public. For her it’s no different, she’s growing up in public. I think it’s good to let people be people. I make mistakes, you make mistakes.” To be sure, Stone wasn’t holding back when journalists lobbed a variety of provocative questions. About the men in her life: “I have the same question. What about the men in my life? I’m not an island.” About her firm stance against cosmetic surgery: “I always said if I had to hang myself upside down like a bat then I would do it.” On her art collection: “I’m the proud owner of an [Egon] Schiele. If only I could afford a Klimt!” And on appearing in an ad for Belgian whiskey, and whether that affects her skin: “Yeah, I drunkenly crawl out of bed and slather on Capture Totale and that sorts me out! I usually don’t drink the whole bottle, but that’s just me.” Later, Stone set the paparazzi wild by attending the Dior show.

THE LATE SHOW: Designers often burn the midnight oil before their show. But actress Diane Kruger also pulled an all-nighter before sliding into her front-row seat at Balenciaga Tuesday morning. “We filmed all night long. I didn’t even go home,” said the blonde beauty, who arrived 15 minutes early — rare for any celebrity. Kruger is working on “Tiger’s Brigade” with French director Jérôme Cornuau. “I play an anarchist,” she said. “I have no problem with that.” Down the row, Maggie Cheung said she’s got a “secret” project in the pipeline for next year. Meanwhile, though, she’s spending her time at the movies. “But I’ve been so disappointed with what I’ve seen,” she said. “It makes me really want to play in an extraordinary film.”

PARADIS SIGHTING: Alysson Paradis — the up-and-coming actress and Vanessa’s little sister — made her first fashion week appearance Tuesday night for the launch of “A World of Beauty,” a book on the last 15 years of Daniel Swarovski crystals. She said she plans to attend the Chanel, Stella Cadente and Celine fashion shows in the days to come. Still, she’s not afraid of a little do-it-yourself fashion. She wore an Antik Batik printed dress accessorized with a necklace she beaded herself. When not stringing together beads, she’s stringing together words in the form of short film scripts for her beau.

VIEW FINDER: Julie Gayet may be a flourishing French actress, but she’s proving herself to be a fine photographer, as well. Taking time off from the filming of “Mon Meilleur Ami” with Daniel Auteuil, Gayet turned her camera towards the mound of lensmen that encircled her at Jean Paul Gaultier. “It’s a little strange, they take photos of me, I take photos of them,” said the budding photographer. Gayet will be documenting fashion shows all week and will sell her work to benefit the French AIDS association Sidaction.